Everyone has been raving about the new Sicardi Gallery on Alabama. But despite its big new building, it is at heart the same gallery specializing in cutting edge Latin American art. And the work with which they chose to inaugurate this new building is spectacular.

Oscar Muñoz is a Colombian artist. This is his third exhibit at Sicardi. Because the new building is so much roomier than the old one, they are able to show work by Muñoz that requires substantial space. Paístiempo is such a work. 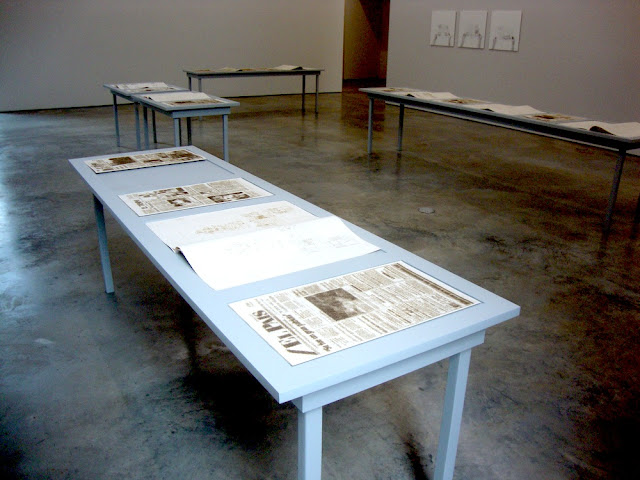 Paístiempo consists of several burnt tabloid-style papers on custom-made tables (each table has indented areas for the tabloids). When I write "tabloid," I'm not referring to the sensationalist journalistic style, but to the physical format of the paper. This is a newspaper with just one fold which opens like a magazine to be read. Muñoz has taken the front pages of actual newspapers and duplicated the front pages by literally burning them into the paper. What happened when he did this is that the burn goes through several layers of paper. Each layer is less burnt than the one above it. The way the pages are set up on the table, you can flip through the tabloids and see the gradual lightening of the pages.

Through the magic of gifs, I can replicate the experience of paging through the tabloid. El País and El Tiempo are big newspapers in Colombia. The work suggests the transitory nature of "news." It could be seen as speaking about censorship or about institutional amnesia, the way certain things get swept under the rug. But these are interpretations coming from outside a Colombian viewpoint. I don't know, for example, what El País and El Tiempo mean to a Colombian. Is one conservative and one liberal? Do they represent different interests and powers? What is the history of the press in Colombia, and its current reality? If this piece featured the New York Times and the New York Post, I would have a very specific interpretation. But when I look at Paístiempo, as impressive and provocative as it is, I know I am only getting part of the story. 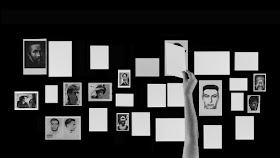 Editor solitario continues the journalistic theme of Paístiempo. We seem to be looking down at a table on which a photo editor, perhaps for a newspaper, is making choices. The images, all faces, range from painted portraits (a Modigliani in the center left is recognizable) to wanted poster images to mug shots to journalist images, including a famous image of a terrified burned Vietnamese child, Phan Thị Kim Phúc. Assuming that this is a photo editor at work, we can interpret this as how what becomes news--and thus becomes history--is decided behind the scenes, in darkened rooms. And we can wonder what is getting left out and what is being included and why?

This idea of erasing history is present in Ciclope. In 1984, Winston Smith's job is to cut away the portions of books and magazines that no longer conform with the ruling party's wishes. The words and images go into a hole in his desk--the "memory hole" (one of the many sinister phrases in 1984 that mean the opposite of what they are called). Milan Kundera approaches the same subject The Book of Laughter and Forgetting, describing how a photo of several communist officials is airbrushed to remove Vladimir Clementis, a communist politician who was purged and executed in 1952. Kundera describes with black humor how Clementis' hat accidentally remained in the photo. In Ciclope, photos of people are erased in a swirling bath of chemicals. Orwell called erased people "unpersons"; not only had they been killed, but the records of their existence were removed.

I believe that the images in Re/trato are stills from a video. Each image shows Muñoz in the process of drawing a self-portrait with water on hot pavement. The image evaporates as he paints it. A similar work involved him painting portraits taken from the obituaries in the Cali newspapers. Forgetting is again the theme, but here it seems less political in the previous works. These works can make one think of los desaparacidos in many Latin American countries and the many kidnappings in Colombia during the long struggles between the government and guerrilla groups. But I am reluctant to assume that the works refer to those  things. Sure, I've read the Memory of Fire trilogy by Eduardo Galeano and A Miracle, a Universe by Lawrence Weschler and other books on modern Latin American politics, but I feel like if I assign a political meaning to the work I close off other ways of seeing it. Muñoz lives in a Colombian environment that I can't pretend to understand in any but the most superficial way, and perhaps more important, brings other meaning to the work. An evaporating self-portrait must have some personal meaning.

But even if I can't grasp the totality of meanings here, the work is nonetheless unnerving and powerful. The theme of forgetting snakes through all these pieces, whether forgetting is personal or institutional or historical. And the work is, ironically, unforgettable.