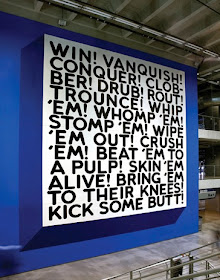 "Art writing in the 1950s and early '60s was uniformly bad (and bland) with the exception of Clement Greenberg and Harold Rosenberg. [...] A good many of the reviewers at the time came from literary backgrounds, usually the New York School of poetry, which showed up in their exaggerated claims and overripe metaphors." [untitled paper from The Writings of Donald Judd, Mel Bochner, 2008]

"Rather, what influenced me in Orwell was his direct use of the English language, in exposition and in argument. This was a most uncommon attribute of art criticism [in the 1950s and early 60s]. Probably it has always been. Every period finds its own peculiar modes of obsfucation and intolerable bullshit when art is under discussion. Today, at least in American academe, the prevalent mode is an abstract, colonial parody of French poststructuralist jargon, thickened with gobbets of decayed Marxism. But in the early sixties, one had to contend with an airy-fairy. metaphor-ridden kind of pseudo-poetry, which infested the art magazines and made reading about art a bore and a trial." [Things I Didn't Know, Robert Hughes, 2006]