Queen of Paris: The Life of Misia Sert

Art historians by nature spend a great deal of time “in a pocket of the past,” to borrow a phrase from Edmund Wilson. This might account for my reading Misia Sert’s biography four times, except for the fact that she is so interesting.

Because Misia’s portrait was painted so frequently, there are ample opportunities to see her image today. I see one by Lautrec when I visit a friend’s print collection. A Vuillard painting of Misia was reproduced in the summer issue of ARTnews. And the Musée D’Orsay is currently offering Misia: Queen of Paris, an exhibition that gathered together portraits, photographs and correspondence related to her life.

Here is a brief summary of that life: Misia was painted by many important artists. She was an exceptionally talented pianist and as a child played Beethoven sitting on the lap of Franz Liszt. She helped to underwrite Diahgilev’s Ballet Russes when he brought it to Paris--Parisians can thank Misia for Nijinsky’s leaps and Stravinsky’s compositions. Misia’s influence was considerable, by pulling strings she could get a director of the French Conservatory dismissed, or obtain for an artist a Prix de Rome. Proust based two of his novel’s characters on Misia, immortalizing her in literature the way artists did on canvas. Proust called Misia “a monument of history.”

Maria Godebska Natanson Edwards Sert (1872-1950), Polish by birth, was a Parisian hostess and art patron. As the wife of Thadée Natanson, publisher of La Revue blanche magazine, she entertained artists and writers associated with the publication. Her second husband’s fortune allowed her to play hostess to “le gratin,” nobility and other swells, in her opulent apartment on the rue de Rivoli, a thematic point of interest for the D’Orsay’s curators who wrote, “The cream of Parisian society sought to be invited to her dinners and after-theater suppers.” Mallarmé, Valéry, Lautrec, Renoir, Bonnard, Vallotton, Picasso, Debussy, Stravinski, Richard Strauss, Diaghilev and Ravel were among the artists and writers included in Misia’s circle.

I choose to see Marcel Proust’s insufferable flattery of grandees as strategy; instead of simply being ridiculous, Proust was working! To create such a brilliant, subtle and astringent portrait of his milieu required hawk-eyed observation. Proust was Misia’s guest, and incorporated her role as hostess into his novel. About Misia’s fictional counterpart, Proust’s narrator states, “Royalty were not too proud to want to be her guest.”

A complex life naturally includes a few disreputable details - a lesbian relationship with Coco Chanel, for one, that “scandalous” ménage à trois underlying her third marriage, and then there was her petite morphine habit, she was known to jab the needle through her clothes. She was probably introduced to smack by her third husband, José-Maria Sert, who adored booze and cocaine. (Recreational drug use was not uncommon, Proust spoke of “the beauty of opium.")

Renoir loved to paint Misia, I know of three of his portraits, and I’m sure there are more. Supposedly he wrote her love letters which she claims she destroyed. Renoir pleaded with her, she wrote in her memoirs, to fully reveal her breasts. Being elderly and arthritic did not stop him from wanting to see that gorgeous bosom, unsurprising for a masterful painter of creamy flesh tones. 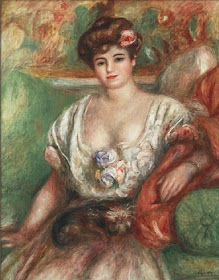 Vuillard’s correspondence reveals he was hopelessly in love with Misia at the time she was married to Thadée Natanson. The night Vuillard looked at her and began to cry, Misia decided, was one of the most beautiful declarations of love any man had ever made to her. Vuillard’s adoration can be detected in the portrait below, in which the seated figure seems to be illuminated in a Belle Epoque interior rendered with depth distortion and unnatural coloring. Vuillard never married. 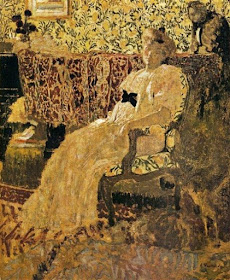 Misis’a first divorce involved a questionable commercial arrangement between her first and second husband. Thadée needed money, and Alfred Edwards coveted Thadée’s wife. While Misia was blowing Edwards’ money, she was loosing him to his mistress the actress Genevieve Lantelme. Bonnard painted panels for her new apartment on the Quai Voltaire, and on them referenced a cat fight between Misia and the mistress over a pearl necklace. Lantelme was a piece of work. She attempted to seduce Misia while she was stealing Edwards. The actress died mysteriously on Edwards’ yacht, which brought Misia a bit of negative attention including a play about her life.

Pierre Bonnard was not the only artist to gently mock Misia with his art. When she destroyed one of his portraits because she found it unflattering, Lautrec retaliated by portraying Misia as a brothel madam with prominent jowls and garish red hair. Art historical anecdotes indicate Misia tolerated the antics of the very inebriated Lautrec, until he made sexual advances towards her maid.

Through the influence of her third husband, the Catalan painter José María Sert, Misia moved into the avant-gardist circle of Serge Diaghilev, who needed money for his Ballet Russes. Among the works of art Misia helped to support were Stravinsky’s The Rite of Spring and Parade by Erik Satie and Jean Cocteau. “Misia possessed,” her biographers Arthur Gold and Robert Fizdale asserted, “an instinctive grasp of difficult avant-garde works” and give by way of example Debussy’s Afternoon of a Faun, derived from poetry by Stéphane Mallarmé, elaborating thus, “Nijinsky’s fetishistic masturbatory handling of the nymph’s veil upset the audience who expected his double leaps.”

Don’t forget that Picasso designed the cubist style stage sets and costumes for the ballet Parade, one of his forays into theater. This was at the same time that he snatched for his first wife one of Diaghilev’s ballerinas. Proust understood the Russian ballet’s artistic significance. His novel’s narrator displays reverence for “when Paris observed the prodigious flowering of the Ballets Russes, revealing Bakst, Nijinsky, Benois, the genius of Stravinsky.” 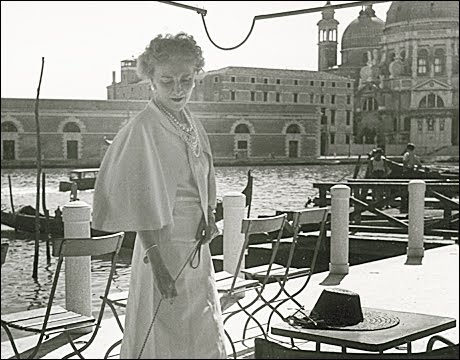 Before she sponsored talent, Misia discerned it, flawlessly according to many. Clive James in his profile on Misia stated, “her personality was volcanic, her taste was original, penetrating and in most cases definitive.” Nevertheless it is the opinion of more than a few that Misia enjoyed causing trouble as much as she did fostering creativity. Perhaps it was insistence on artistic excellence that made her imperious and rude, she walked out on Mallarmé’s poetry reading, but he remained devoted. Many of the traits Proust assigned to his battleaxe hostess Madame Verdurin were Misia’s. Paul Morand, an acquaintance, said Misia was “more Madame Verdurin than the original, taking to or rejecting men and women at first glance.” Clive James reduced Misia’s haughtiness to, “you had to be gifted before Misia wanted to know you.”

Musée D’Orsay curators picked up on the theme of Misia as a divisive trouble maker when they wrote, “Misia was an arbiter of taste and fashion, bringing together her friends just to set them against each other at a later date.” In this they were guided by memoirs and biographies offering evidence that Misia at times could be a witch. Jean Cocteau’s biography is one, but Cocteau’s statements must be understood in light of his belief that Diaghilev stifled his theatrical art. “The impresario,” Cocteau wrote, “was an expert at making trouble for recalcitrant or ‘disloyal’ artists, and to do the job more thoroughly he had the habit of enlisting the very considerable trouble-making expertise of Misia Sert.”

Misia was godmother to Picasso’s first son, and Picasso painted her portrait. Picasso biographer John Richardson spits venom at Misia. Among the bitchy things Richardson called Misia were, “a liar,” “famously dangerous,” “meddlesome.” “Backstabbing proclivities,” was another sulfurous term. It’s ironic that one of the best Misia stories I have ever read came from Richardson. Misia, in her box at the Ballet, raises a lorgnette to survey the packed house, and recognizing no one she knows says, “There’s no one here!”

In 1914 when the German army was advancing on Paris, Cocteau forgave his “chere Misia” for whatever treacheries he believed she and Diaghilev committed, and joined her convoy of ambulances bringing aid to the front. Parisian couturiers owed her, Misia figured, so she got them to turn over their delivery vans and donate supplies. The narrative of Misia’s ambulance brigade appears summarized in Francis Steegmuller’s biography of Cocteau and is worth repeating:


(Misia’s) energy diverted from ballet to patriotism, she had obtained authorization from General Gallieni, the military governor of Paris, to form a convoy of ambulances to administer first aid as close to the front as possible; she persuaded the grands couturiers to contribute their idle vans, had their interiors refitted, and formed a team of volunteers that included Sert, Cocteau, Iribe, and a professional nurse, apparently the Madame Rumilly mentioned by Gide. Headed by Misia’s own Mercedes, which contained Misia herself, Iribe at the wheel, and Cocteau beside him “dressed by Poiret as a volunteer male nurse,” the convoy set off toward the firing line. The horrifying sights they soon met up with are described by Misia in her memoirs – the bodies of dead horses littering the roads, fragments of men and animals thrown in the air by explosives still hanging on the branches of trees.

After that war Misia put on a gala in the Hall of Mirrors at Versailles. The next war illuminated a few cowards, which Misia and Cocteau, who attempted to rescue the poet Max Jacobs from the Nazis, certainly were not. Misia’s string pulling could not save Jacob’s life. What did Picasso do to help his friend? By the time Misia was finding Coco Chanel her clients and instructing her on matters of art and taste, her irreplaceable influence had spanned the disciplines of art, music, literature, dance, theater and fashion.

About the homosexuality - belief and doubt are evenly divided. Cocteau wrote a play based on Misia’s sexual attraction to her third husband’s very young mistress, critics blasted it as “vacuous.” And she and Coco Chanel fought like lovers; Misia resented Chanel’s veering into art patronage. (Chanel said Misia’s husband stank - Misia declared it was she who conceived the idea of selling perfume.)

In her memoir Chanel said Misia was, “my one real friend, but my feeling for her was more than friendship.” When Misia died in 1950, Chanel dressed her body and laid it on flowers. After Misia’s death Chanel wrote, “we love people only for their faults; Misia gave me ample reason to love her.” 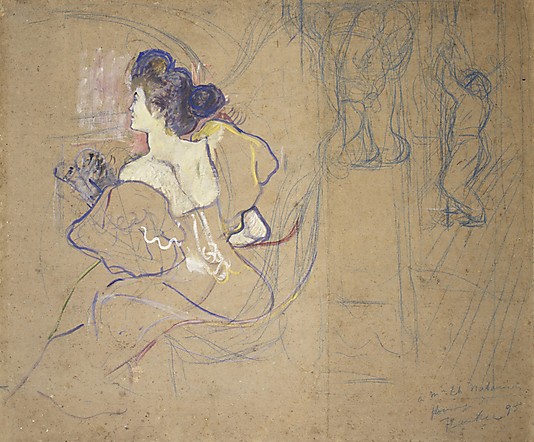 Lautrec created one of the most captivating portraits ever made of Misia in 1895. She is depicted in her theater box dressed in a seductive low-back gown, leaning forward to watch the performance. Lautrec’s image has consonance with Proust’s literary characterization of Misia as the Princess Yourbeletieff. “The princess,” Proust’s narrator said, “was a sponsor of all these new great men.” The narrator describes the princess in her box at the Ballet, “bearing on her head an immense, quivering aigrette, unknown to the women of Paris, which they all sought to copy.”