A Journey Within: The Art of Scott Woodard 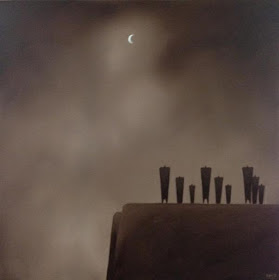 “Virginia, could this be of interest?” was the greeting Dan Allison sent with his exhibition announcement. This was slick. A polite, ambiguous little note asking for something without actually asking caused me to stop my work and look closely at the images from “Journey,” Scott Woodard’s exhibition of paintings which will open at d.m. allison art on September 8.

If Dan’s note got me to look, it was the mysterious forms in Woodard’s paintings that made me want to know more about his art. So I contacted the artist and asked a few questions.


VBA - The forms in your paintings have a haunting quality. They make me feel the same yearning I feel in the presence of ancient architecture and archaeological ruins. Do they reference specific sites, a monolith at Gobekli Tepe, for instance, or Stonehenge?

SW - I have always had a great attraction to monolithic architecture. The monolith in the movie 2001 captured my attention as a young man and I have found temples, pyramids, underground tombs and other such structures particularly magnetic and am mystically drawn to them. Large, massive structures have a tendency to slip into my psyche and take me to a kind of meditation - like they have some kind of energy that my inner being relates to on a higher level. 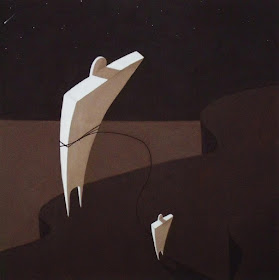 The figures in Woodard’s paintings seem stylistically related to Greek Cycladic figurines. Woodard told me he is aware of Cycladic art, but intended no direct reference, and that his figures’ shapes have evolved and varied. He described a past series with shadowy forms floating across desert landscapes, and spoke of figures that were “architectural, but with a balletic nature,” and had detached heads. He said, “The sentinel-like figures are the vessels for composition, representing the Divine in physical form. They have evolved over time from the balletic figures to a much more organic and clumsy figurine and now to what is the more structured and architectural sentinel.” He called them “the quiet watchers.” 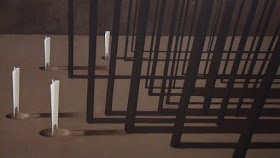 I'm put off balance when an artist uses such words as “soul” and “divine” because they often signal rigorous mental excursions, Vedanta or Plato for example, which shifts us into an intellectually satisfying arena. Woodard used those words during our interaction, and offered them unrepentantly in his artist statement:

As these are primarily inner landscapes, I want the viewer to have that same experience: to pull order and balance from the quiet of simplicity. The veil of illusion keeps us moving as sleepwalkers. I want to see past the veil and have a more solid connection to the divine.

VBA - Tell me specifically what you mean by “soul” and “divine.” Are you talking religion? Please describe their philosophical underpinning?

SW - My study of Eastern philosophy, more specifically, a carefully arranged set of Indian teachings compiled by Swami Muktananda, the founder of Siddha Yoga, confirmed what I had come to believe as my truth. My thoughts as a young man were “if there was something to the God thing, or some power of the Universe, then whatever that was, had to be what made me what I am.” This was the basic tenet presented to me and I was thrilled to have been shown my truth and that I was not alone in that thought. The soul, as I understand, is the part of the Divine that exists always. My journey in this lifetime is for the purpose of my soul taking my mind to the place where it recognizes I Am That.

I am fascinated with what yoga calls “maya,” or the veil of illusion. That veil cloaks us from knowing the Divine, and our search for discovery leads to that veil becoming more transparent. The more transparent it becomes the more truth is revealed. I do not believe this is my first life in a human body. When I visited Monument Valley for the first time after years of drawing that desert, I was overcome with an incredible feeling of homecoming.

Reincarnation! To speak openly about having lived many lives reveals delightful disregard for commercial practicalities.

Woodard’s search led him to an ashram in the small village of Ganeshpuri in India where he practiced meditation, performed seva (selfless service) and immersed himself in shakti, the energy that flows through everything. It requires silencing the mind to be in harmony with that energy. Silent contemplation brings to conscious awareness all the gods and heavens and devils and universes within ourselves, in the energies of our body. Woodard’s imagery directs us within, just as painting titles such as Release of Desire and The Cooling of Desires invite the viewer to reach “stillness of the soul.” 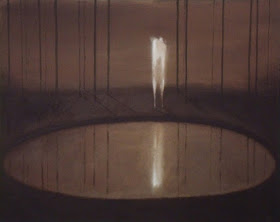 Intrigued by the forms in Arrival and Reunion from 2011, shown below, I asked Woodard to explain its meaning. He designed the X-shaped composition he said trying to imagine his figures, “the beings,” moving toward the architecture’s center. If the figures are aspects of our personality, their merging symbolizes self-knowledge. They might also alliterate our perception of ourselves as separate from each other. Within the theme of separation he indicated he also entertained “fear of dissolution,” which is “fear of dissolving of the body and returning to source.”

On another level Arrival and Reunion speaks of enlightened understanding. “What rests in my mind's eye,” Woodard said, “is the moment just before the beings lift off, straight up in some joyous formation of celebration, no longer restrained by self-doubt, self-absorbed thought, or any other bondage that keeps us tied up in non-reality.” 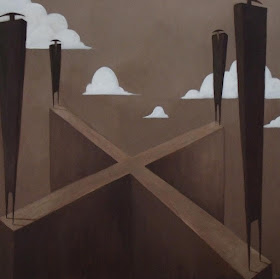 I mentioned seeing his 2011 sepia toned Satyr traditionally rendered with horns, goat feet and satyr penis. That painting’s atonal burnt umber unequivocally suited a debased creature from antiquity. Similarly, the dark tones in Zeus at Olympia reframed the inexpressible silence of ancient temple sites. Woodard excitedly agreed he had discovered an effective, richly symbolic, color palette for aligning the mind with ultimate truth. “About my palette,” he said, "in 2004 I wanted to do some small portraits of my evolving beings to be colored like vintage sepia toned photographs. When I completed the series using only burnt umber and white, my creative world opened up dramatically. From this limited palette came unlimited creativity, worlds seemed to leap from inside me, a most joyful experience.”

Woodard said he continued to use the restricted pallet for a “tomb” series and a “Seven Wonders of the Ancient World” series which was exhibited at Nau-haus, and also used it recently when he merged the small portraits with architectural forms and landscapes.

There is no more purposeful exploration than to try to grasp the nature of reality. Woodard’s art, like its underlying philosophical disquisitions, achieves a discipline of the mind. “My creating is a gift that allows me to pursue my spiritual path,” he said.