Conversations During the Opening Reception: Guus Kemp and b. moody

It was important to him I view the canvas from many angles. “You’ll observe variations in texture by changing viewpoints,” Guus Kemp said at the opening reception of PG Contemporary’s three person exhibition. Wanting me to appreciate his paintings’ sculptural qualities, the artist positioned me near the side of the canvas, and at various frontal angles. Admittedly by trotting around the painting, I saw unexpected patterns emerge from the clusters of meringues-shaped globs that seemed to defy gravity.

It requires more than revved-up impasto though for a painting to be interesting. Kemp established energy and motion with sweeping brushstrokes. He told me he aims for dynamism.

If exuberant swirls call to mind de Kooning, this is not unexpected for a Dutch artist. Kemp was trained in the Netherlands where it would be impossible not to be impacted by Rembrandt, Vermeer, Van Gogh and de Kooning’s mastery of color and light. 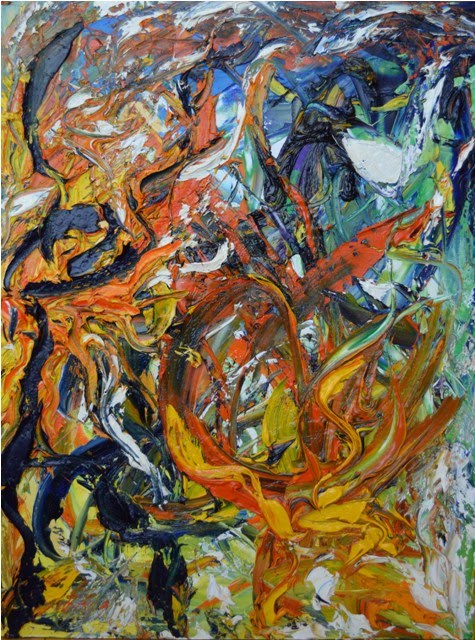 “Do you use a brush,” I asked wanting to know his process. Kemp replied he only uses a palette knife. I asked if he mixes the paint with painting medium. He does not. His oil paint is unmodified, “straight from the tube,” he said.

Kemp’s colors are jewel like and glittery and are chosen for their up-lifting quality. He wants his art to sooth viewers’ emotions. Psychically comfortable art it turns out can be commercially viable. The artist was rightly puffed up as he described abundant gallery representation, with affiliations in New Orleans, San Antonio, and a solo exhibition at PG Contemporary scheduled for March 2013. “I sold 52 paintings last year,” he volunteered. One thing became certain during our chat - this guy is enamored with paint. 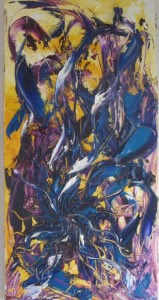 A big hug from b. moody (artist Bradford Moody) and I’m into my second conversation during PG Contemporary’s opening reception. Moody’s hair is still damp from his bath and he “dressed up” for the opening but there’s paint on his clothes and paint stains covered his hands. It took him about two seconds to remind me that his solo exhibition will be in December.

By this Moody means that I too witnessed south Loos-iana agricultural laborers, called field hands, perform back-bending work. He is also referencing youthful excursions into the New Orleans French Quarter, where along with hookers, strippers, druggies and other sorted types, we frequently encountered transvestites.

I got pulled by the elbow to the large diptych I Still Love You and asked, “Does the tape work?” Indeed it did. Bits of tape disarranged across agitated lines and shrill colors added disorder. He pointed out areas in which he left the cardboard ground exposed, extra messiness that offset arts’ grandeur. As is often the case when discussing his art, the topic turned to Basquiat whose graffiti aesthetic Moody absorbed when he lived in New York. Along with Basquiat, his work is directly influenced by Egon Schiele’s death-haunted figures. “I want my art to be raw and naked,” Moody told me.


VBA – Brad, she’s decidedly perverse. That harpy shows you at your most twisted.

We’re talking about the diptych’s maternal figure, a frequently encountered motif, emblematic of fecundity, death and overbearing strength. Moody conceives the figure naked and in high heels with a ghoul face, corpse color skin, pregnant belly, and a stitched up vagina. Unlike previous versions, this one has no bloody crotch. 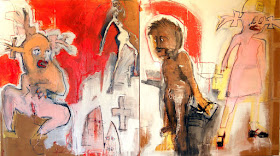 The third artist in the group show, Ushio Shinohara, was unable to come from New York or somewhere for the opening reception, which was unfortunate because having seen his wicked little sculptures, which by the way were selling and which MOMA will soon be exhibiting, it is certain we would have had a charming conversation. Works by these three artists will be in PG Contemporary’s booth at the Houston Fine Art Fair. 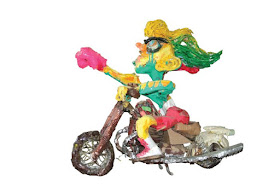