What Does It Take to Be Patron of the Year?

The obvious and cynical answer to the question above is "big checks." Particularly big checks to the artistic institution that is awarding the title "Patron of the Year." In this case, the institution is the Art League of Houston, and I have no idea if big checks were involved or what criteria at all were used to choose the 2012 Texas Patrons of the Year, Scott and Judy Nyquist. But from the point of view of local artists, they do one thing that well-qualifies them for the honor--they buy local art. And this honor affords them the opportunity to engage in what is the secret desire of all collectors--to show off their collection. I was kind of proud to notice that I had works in my modest collection by many of the same artists shown in this exhibit. So maybe I could be "Patron of the Year" someday--as soon as I start writing some big checks.

Here are a few notable pieces from the exhibit. 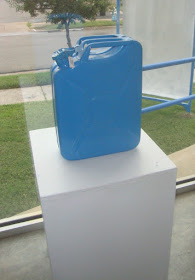 Jerrycan (water) by Adam McEwen apparently came with five gallons of water from Marfa, but I don't know what happened to the water... 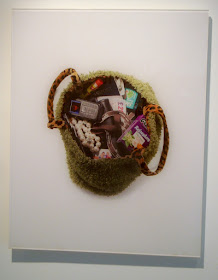 The late Chuck Ramirez created this photograph of Judy Nyquist's purse. One of his trademarks was to photograph objects isolated in a white, indistinct space, and this piece is a good example of that approach. 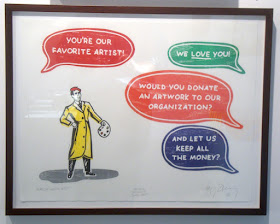 Ain't it the truth? Gary Sweeney's piece should make folks who buy work for fundraisers fell just a little bit guilty. I confess I look for bargains at such events. But they are somewhat exploitative, no? Aside from a possible tax deduction, some "exposure", and good feelings, what does an artist get from donating art for silent auctions, etc.?

Collecting sculpture is often quite difficult because it makes a lot more space demands than a painting or photograph. But Leap Year by Joseph Havel is the perfect sculpture for an individual collector--it has a tiny footprint. Anywhere you have 4 1/2" by 6" of floorspace, you can display this piece. 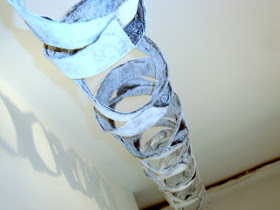 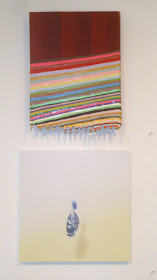 This was an interesting pairing--Joseph Cohen's bold, plastic painting above Allison Hunter's delicate nature photo. The two works are both beautiful to my eye, so they have that in common. 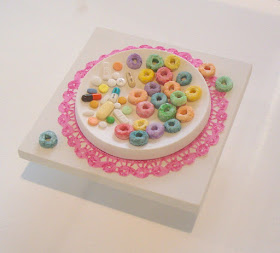 There were two vitrines full of smaller work, such as Marzia Faggin's pill and cereal combo, Fruit Loops. And this is a way for young collectors to get access to work--buy small pieces. Sure you'll end up with shelves of artistic knick-knacks, but what else are you going to put on those shelves? Humel figurines? 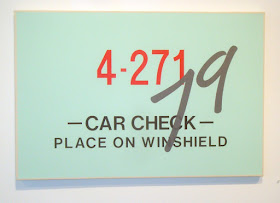 Rachel Hecker paints (among other things) the little scraps of paper that have scrawled writing on them that inhabit our lives--like post-its. Her meticulous, impersonal painting style invests these ephemera with weird (and it has to be said, undeserved) dignity. 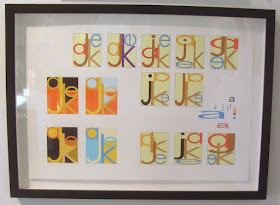 These sketches by Aaron Parazette are of the word "Jake", the name of the Nyquist's son. What's neat about them is that we see the designer in Parazette at work--trying out different variations of the same basic idea. 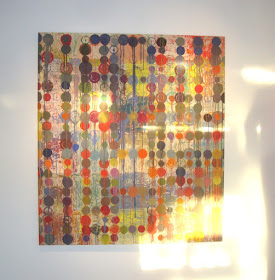 Robin Utterback was one of the Fresh Paint alumni and was tragically murdered in 2007. I apologize about the spotty lighting on this painting, and I want to note that the front gallery at the Art League was really badly designed. It has tall large windows that let in direct afternoon sunlight. In addition to potentially damaging some artwork on display, it is really distracting. 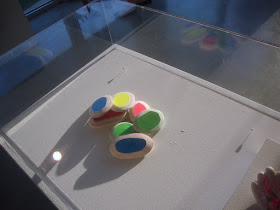 Woody Golden takes colored paper, laminates it together into a kind of board, then sands it down to resemble river stones worn smooth and round by erosion. These are another example of artwork that doesn't cost a collector to much yet leaves the collector with something charming and lovely.

That's actually the real virtue of this show. It has items that are small and intimate, items that were gifts from artists, and multiples--in other words, it is almost a primer for a beginning collector. It can be intimidating if you want to buy art but have a limited income (like most of us). You walk into a gallery and look at the prices and it's scary. You don't see how you can even start. The Nyquist collection contains some works that I'm sure they paid a pretty penny for, but it also contains work that probably didn't cost all that much--but which probably brought them as much pleasure as many of the more expensive pieces.