At the City Council Meeting

Friday night, I attended a city council meeting for the cities of Bismark, Oakland, Tempe, San Antonio, Houston, and Portland, Oregan. Except what I actually attended was a night of amateur theatricals called City Council Meeting (put on by Diverse Works) using as its scripts parts of actual city council meetings that occurred in those various cities. This was a piece of participatory art, to use the term favored by Claire Bishop in her book Artificial Hells: Participatory Art and the Politics of Spectatorship. The audience were the performers to a certain extent. It was a highly formalized and controlled performance--each performer was reading from scripts. There was no improvisation. This evening's version took place at the El Dorado Ballroom over by Project Row Houses.

The audience was divided into four general roles--city councilor (including the mayor), speaker, supporter or bystander. I chose to be a bystander so I could take notes and take a few photos. That was a compromise, though, because the piece was for the participants. They stood the most to gain from participating. 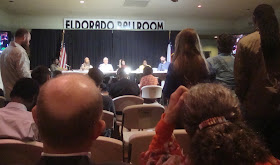 The staging was minimal. The participants weren't dressed in suits and ties or otherwise made to look like a real city council. There was an elevated platform with a long table behind which the city council and the mayor say, facing out towards the bystanders and supporters. There was a small table and chair facing the city council where the various speakers would sit. Flags on either end of the long table were the only concessions to set decoration.

And sitting in the audience, I could see lots of people involved with the local art scene, lots of teenagers (and even younger kids) with their parents, and a few other people. The kids were from the Project Row Houses After School Program and from Kinkaid, an elite private school. I was told that the Kinkaid kids were promised that if they attended, they could drop their lowest test score, but I don't know if this was true. It was pretty much a full house.

The performance started out as a celebration of a retiring city councilor from Bismark, North Dakota. She had served for 20 something years, and there was a lot of jokey comaraderie as she official resigned. But curiously, she was played by a man. And the nameplates for the various city councilors and the mayor only occasionally matched in gender or ethnicity with the participant playing that role. The reason for this would become clear later. In Bismark, the retiring city councilor was replaced by a new one who we saw sworn in. She was played by one of the kids in the Project Row Houses After School Program.

At this point, we in the audience were moved to the back of the room for a few minutes, then asked to return to our seats. It wasn't at all obvious why this was happening. 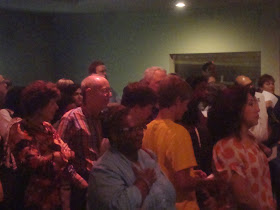 Audience in the back of the room

Suddenly, all the name plates for the city councilors were changed. Now it's San Antonio and mayor Julian Castro, a rising Democratic star, is presiding. Two young people speak about their experiences with some program in San Antonio, but they both make heartfelt pleas for the government of San Antonio not to ignore East San Antonio.

Then there is a sudden change to Houston. The subject was "Renew Houston," a new flood-control infrastructure upgrade. This program was to be paid for by a new fee  and that the fee would apply to churches along with all other property owners. That was one controversial aspect. Another was that city councilor Steve Costello had, until recently, been a contractor with the city for this kind of infrastructure. Speakers addressed both these controversies, and astonishingly, Steve Costello played himself, reading his own words from that city council meeting which took place two years ago, I think. 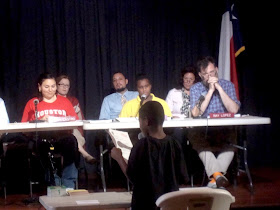 Then it switched again, this time to the city council of Tempe, Arizona, in which the mayor gave a very strange speech. The next was an Oakland city council, which seemed tense and chaotic, with a very loud gavel being hammered every now and then. the first speaker seemed like a hippie-type, speaking about peace, love and understanding. Then a speaker came up and confessed he had just been released from jail, which got a big laugh from the audience. But that was only because the meetings were context-free. It turned out he had been an Occupy protester caught up in the big clashes between the police and the protesters in Oakland.

Hence the tense, chaotic feeling of the Oakland section. The loud gavel was to quiet the rowdy spectators, who were in this reenactment not present.

This part of the show ended with a bizarre encounter in a Portland, OR, city council meeting where a citizen speaker complained of the disgusting garbage on the street in his neighborhood, including used condoms, and proceeded to dump some of this garbage on the desk in front of him, causing the city council to declare a recess until it could be cleaned.

The idea--using a series of transcripts of city councils to illustrate a certain range of civic engagement that exists in the U.S., is good. The creators of this performance, Aaron Landsman, Mallory Catlett and Jim Findlay,  realized that city council meetings were one of the few venues where civic engagement was enacted as a dialogue--in short, where the process could be easily turned into drama. And it worked--you had a range of emotions, from the fond farewell to a colleague to a charged post-riot meeting. And none of it had to be contrived by a playwright--it was, in a sense, "found" drama. Not to diminish the art of writing plays, but the fact that these bits had actually happened, that these words had actually been spoken in actual city council meetings, gave the work an incredible sense of authenticity.

Authenticity seems to be one of the frequent goals for participatory art. Hence when Jeremy Deller created The Battle of Orgreave (2001), the participants were comprised of two groups, each with their own concern for authenticity--former miners who had participated in the original clash with riot police in 1984 that the piece was recreating, and battle reenactors, who usually reenact famous battles from English history and have a fetish for authenticity.

But authenticity is curiously undermined by amateurishness. I was a "bystander," which effectively made me an audience member. And as the speakers and city councilors read their lines, I often found myself wishing they were skilled actors. Some of them embodied their roles pretty well, but many were awkward actors (just as I know I would have been if I had been in one of those roles). It was cute when the young kids of the project Row Houses After School Program were reading their parts, stumbling over hard words, but that awkwardness lessened the drama. The creators of the project have spoken of empathy, but  the amateur acting made empathy harder for me.

But perhaps not for the speakers themselves. With such a project, you have to ask who it's for. Stephen Duncombe and Steve Lambert chided critics in "An Open Letter to Critics Writing About Political Art" to consider who the art was for--who was the intended audience. And whether or not the art was reaching that audience effectively or at all. A good example of this is Hans Haacke. His intended audience for his most powerful pieces were the middle class liberals who went to art museums. He had researched them thoroughly through polls. And he made work that was aimed at them and which forced them to consider the complicity of their innocent art viewing with various crimes and immoral acts committed by large institutions in the world.

In this case, the art wasn't for me, a mere bystander, as much as it was for the active participants--the city councilors and the speakers. By taking on these roles, however awkwardly, they got to put themselves inside someone else's shoes--someone who was civically engaged. They got to see the love for the retiring city councilor or the tension of the post-Occupy riot meeting from the inside. How effective this was for them, I don't know. But as a viewer, I wish it had been more of a traditional theatrical performance.

The final part of the program had Steve Costello facing the project Row Houses kids. They seemed to be having a dialogue, but they were actually speaking about two different things. I found Costello's piece quite interesting. He talked about how a group of engineers with serious concerns about infrastructure in this city decided to pick their least nerdy member to run for city council so that they'd have someone on the inside to represent their interests. It was fascinating because it presented what often reads as a bad story (self-interested politicians) as a good story (a group with special knowledge because of their work picking one of their own to advocate for projects based on that special knowledge). Considering the costs to Costello (being investigated and accused in council of having a conflict of interest), the story he told was unexpectedly poignant. 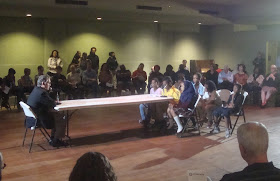 How effective this was as activism is an open question, but it seems unlikely to have been more effective than "non-art" activism. For instance, activists who train folks to speak at city council meetings and round up concerned citizens to attend such as Nick Cooper with Food Not Bombs and their responses to the anti-feeding laws. This is one of Claire Bishop's complaints--that participatory art often falls pretty short as activism, but because it's art it ends up getting graded on a curve. (The opposite complaint is also true--we are often willing to give bad art a passing grade because we agree with its political stance.)  But I will take Duncombe and Lambert's instructions literally and say that as activism, City Council Meeting seemed likely to fall short, although time will tell. Will this encourage more people to be civically engaged, to go to city council meetings to talk about flooding or feeding the homeless or other issues that are important to them? I'm dubious, but who knows what those Project Row House After School Program kids will be doing in 20 years? We can't know if City Council Meeting has kickstarted the career of a future leader or activist.