The first time I heard of Ian Hamilton Finlay (1925-2006) was in a book by Charles Jencks called Post-Modernism. Jencks' conception of Post-Modernism was shot through with classical allusion (and neoclassical allusion), and Ian Hamilton Finlay seemed the artist who best embodied Jenck's ideas. (I wonder now if Jencks didn't form his conception of a neo-classical post-modernism after being exposed to the work of Finlay.) It would be unfair to bring everything Finlay did down to neoclassicism, but it nonetheless runs through his work. 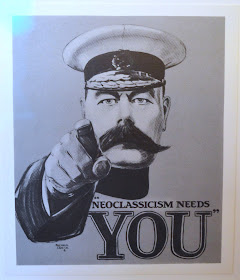 Finlay was a poet who established his own press, Wild Hawthorn Press, to publish his poetry. He belonged to the school of concrete poetry, and at some point got the idea of inscribing lines of poetry into stone and placing them in his garden. Working with sculptors as his collaborators, he began designing a garden for himself (with the collaboration of his wife, Sue Finlay). Because of his running conflict with the Scottish Arts Council (headquartered in Edinburgh, the"Athens of the North"), he named his garden Little Sparta. Now this is a very grand garden. I think I'd call it a park if it were not for the fact that it was a private creation and that the Finlays lived there. 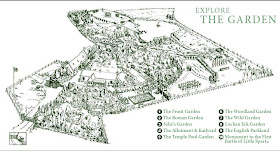 A map of Little Sparta

Finlay created numerous prints published by Wild Hawthorn Press. Like the pieces in his garden, he depended on collaborators to help him create the pieces, not unlike many post-modern artists who came to prominence in the 1980s. But unlike many of these artists, Finlay tended to credit his collaborators. 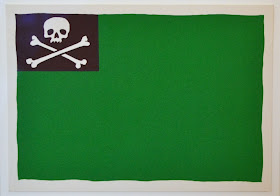 Many of Finlay's small silkscreen prints are currently on display at Hiram Butler Gallery, or you can see all of them at Wild Hawthorn Press's website. Some of the small prints at Hiram Butler are from Finlay's "National Flag Series." None of the "nations" exist--they are either mythical, fictional, or have specific art historical resonances unrelated to their actual existence. For instance, the Arcadia flag more likely refers to the Arcadia of Poussin than the actual place, a landlocked area of Greece known in antiquity for being bucolic and rustic. But in Poussin's two paintings around this subject, Greek shepherds find a monument (a tomb?) with the inscription "Et in Arcadia ego," which means "I am also in Arcadia." The "I" here is Death.

So Finlay's flag, which appears initially to be a pirate standard, essentially mirrors the meaning of Poussin's paintings. The green field refers to the bucolic land of Arcadia, and the small skull and corssbones in the corner is the reminder that death also dwells here. 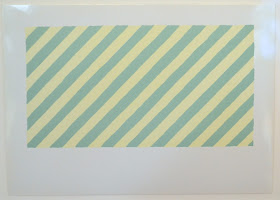 Cythera (now usually spelled Kythera--the "C" is hard) is a real Greek island that in mythology was said to be the birthplace of Aphrodite.  But those who know art history will recall The Embarkation for Cythera by Jean-Antoine Watteau.The painting shows a group of men and women descending to a boat. Despite the title, they are leaving Cythera--a comment on the brevity of love. So even though Cythera is a real place, the Cythera of Ian Hamilton Finlay is Aphrodite's island. 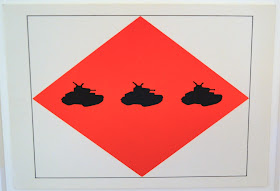 Valhalla was the hall in which half of those slain in battle go to await (and prepare for) Ragnarök. (The other half apparently go to a place called Fólkvangr.) So it appropriate that three tanks are silhouetted on the flag. 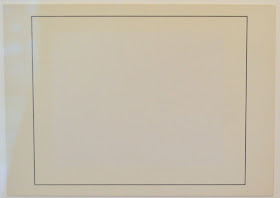 Utopia is the one I like best. The word "Utopia" was coined by Thomas More in 1516 as part of a book of political philosophy centered around a fictional island of that name. The word comes from Greek and is usually interpreted as "no place." So the blankness of the flag is appropriate. But I also interpret it as reflecting the impossibility of progress towards perfection or purity. In other words, it could be seen as Finlay teasing the utopian ambitions of Modernism. A blank white image is sort of the ne plus ultra of Modernism--and its dead end. Finlay's own work, even when it resembles modernist work (as in Utopia) is rich with allusions and associations. This was in fact one of the characteristics of post-modernism as described by Jencks, which is probably why he found Finlay's work so admirable. 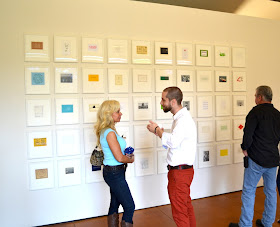 Finlay's primary work is his garden. These various small silkscreen prints produced by Wild Hawthorn Press seem like little portable adjuncts to the main project. But they are charming, amusing, and surprisingly multi-layered.