Shipwrecks and Other Moons

One could, on seeing Ted Kincaid's photos at Devin Borden Gallery, be tempted into a conversation on the authenticity of photography. But that conversation would be old hat. What interests me is that these highly manipulated images are not obviously double-coded. They aren't images of things and about being images of things. They generally lack irony. 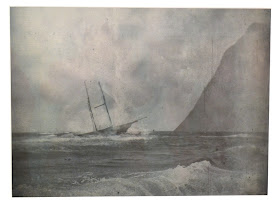 For a modern person, however, shipwrecks are extremely uncommon (notwithstanding the Costa Concordia). And the image of a foundering schooner like Kincaid's Shipwreck is likely to evoke nostalgia more than, say, sublime terror. One might think about Turner or Géricault, Ernest Shackleton or Patrick O'Brien's The Thirteen Gun Salute. But what we know looking at this picture is that it is meant to represent the past. The only irony in the work is that it uses modern technological methods to depict the past. Otherwise, it is simply what it seems--a romanticized image of shipwreck, laden with all the symbolism such images suggest (mortality, futility, the power of nature, etc.). 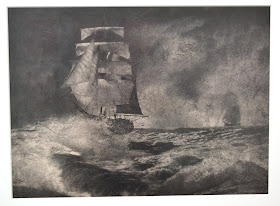 Kincaid's show is called Earth, Sea and Sky. Stormy Sea and Shipwreck are the two "sea" pictures. There are several landscapes, which are similar to the nautical pictures in their sense of nostalgia. Kincaid's landscapes aspire to be simultaneously gothic and sublime, and therefore to recall late 18th century/early 19th century literature and art. 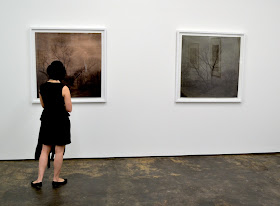 But the oddest and most original pieces in the show are his series of Possible Moons. 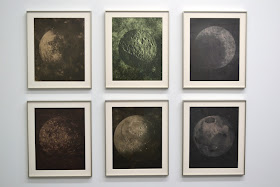 These moons float in miasmal space. Indeed, they seem suspended in some unhealthy medium quite unlike the cold vacuum of outer space. Of course, this is also nostalgic. Until the early 20th century, scientist believed there was a medium in space called ether. 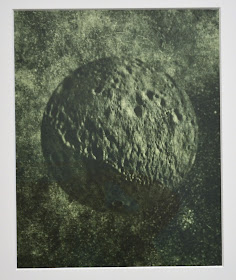 These moons are mysterious and somewhat threatening. The antique look of the images might make one think of early science fiction--more H.G. Wells with his sinister plots (see First Men in the Moon, for example) than Jules Verne. 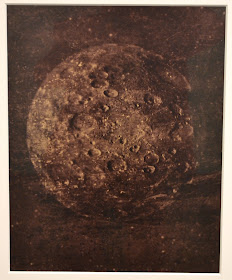 It used to be an insult to refer to pictures as being literary. Being so described was to suggest that the art in question betrayed its essential nature. But I think the infinitely manipulable nature of digital photographs puts paid to such notions of essentialism. To say then that a work is evocative of some older literary source or genre is no insult. The only issue then is whether it does this well or poorly. I think Kincaid's images do it very well. But they shouldn't be hanging on the white walls of a modern gallery. They should reside in some wood-paneled library whose owner retires there to read 18th and 19th century literature (perhaps The Castle of Otranto or Wuthering Heights) on his Kindle.