The Houston Center for Photography has a very interesting show up right now called Unusual Garden. One photographer has a room all to herself. Judy Haberl's photograph Antidote, takes up one complete wall. It's 21 feet wide. Then on another wall are circles of woven fabric arranged in a seemingly random pattern. 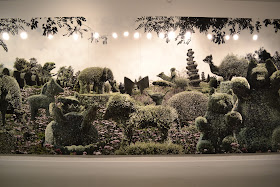 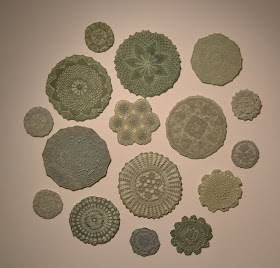 The room they are in is curtained off from the rest of the HCP by heavy, opaque curtains. And every few minutes, the lights turn themselves off. Then you see something like this. 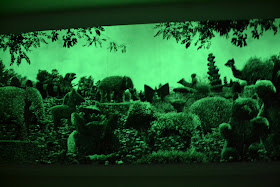 I apologize for the shaky image--it would have been better if I had used a tripod. This glowing image of a topiary garden in a darkened room verged on the uncanny. The five-year-old me might have been unnerved by the topiary--the sudden darkness and mysterious green glow would have been terrifying. I've been obsessed with things that glow ever since I was a kid seeing the phosphorescent minerals at the Museum of Natural Science. The effect in artwork is often used towards trivial ends, but Antidote seems just right--it speaks to the deep spookiness of glowing images. 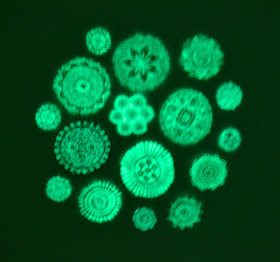 And Doillies is, if anything, even more powerful. (Again, forgive the focus--imagine them in sharp forcus. Or better yet, get down to the HCP and see them in person. The show is up through April 21.) As woven circles in a lit room, they made little impression on me. As glowing objects floating in front of my face in a pitch dark room, I felt myself regressing like William Hurt in Altered States. I was a primitive animal, perhaps a rotifer, swimming in a warm Cambrian ocean among a colony of photoluminescent diatoms. It is a shock when the lights come back on, yanking one back into reality.

There is something a little gimmicky about producing glow-in-the-dark art. Certainly it doesn't seem like a medium conducive to producing strong feelings in the viewer. As Bob Dylan put it, "...flesh-colored Christs that glow in the dark / It’s easy to see without looking too far / That not much is really sacred." But somehow Haberl has pulled it off. I was unexpectedly stirred by these glow-in-the-dark pieces.