It's been a while since I did one of these. But bonus time hit and I decided to celebrate by buying some art. It took me a while to find some art I was willing to commit to that I could afford--always the tricky balance, for me. But I saw the new pieces by Julon Pinkston at Zoya Tommy Contemporary and I loved them. In fact, there were many there I loved so I'm already feeling buyers remorse over the  other Pinkston works I wish I had. No matter what I had bought, I would have still felt regret for what I didn't get.

Here's the thing. There are artists and whole art movements that strive to somehow remove their art from the capitalist system, who try to create art that is cannot be made into a "commodity." I get it. But the pleasure of buying and owning art is exquisite, so all you trendy commies can go to hell. 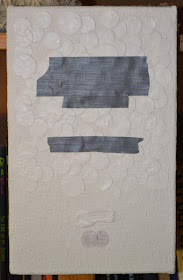 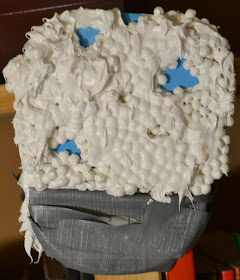 I had seen Julon Pinkston's work at the Big Show at Lawndale in 2011, and I liked it, but it wasn't anything I felt I wanted to have. Not so with these. On opening night, I literally spent 30 minutes trying to decide which of the many pieces I wanted--there were so many good ones.

Now some readers are possibly thinking, man, listen to this rich asshole talking about his art buying. But while I make a decent living, I am far from being in the 1% (much less the .01% who break the records at Sotheby's and Christie's). The thing is, Julon Pinkston, like many local artists, sells his work at prices that a non-wealthy collector can manage. There is a lot of fantastic art out there that ordinary folks can afford. The Vogel's proved that.

Jen Graves wrote a manifesto for collecting in The Stranger (a Seattle weekly newspaper) a few months ago. There have been lots of artistic manifestos, but Graves' manifesto, "Buy Art!" (subtitled "If You Have Never Bought a Piece of Original Art, You Are Doing Life Wrong"), may be the only manifesto for collectors I have ever seen. She wrote:


The last time you avoided an art gallery out of intimidation or slunk out of one feeling out of your depth? That was the final time. Right here, right now—this is the end of your lifelong career of never once having bought a piece of original art.

[A]rt has a double economy. One economy is nearly free. The other—where you actually buy—is perceived to be basically impossible to enter unless you're a Rockefeller. Yes, the art that's sold for millions and makes headlines for its auction records, etc., etc., no, you cannot afford that art. But who cares? The world is jammed with 99 percent art. [Jen Graves, "Buy Art!", December 5, 2012, The Stranger]

Her piece spoke very specifically about buying art in Seattle. Devon Britt-Darby picked up the ball and wrote a piece for Houston in Art + Culture. He wrote, in essence, that what is true in Seattle is just as true in Houston: there's plenty of affordable art if you look around for it and are willing to ask for it. Don't assume that everything for sale in a gallery is out of your range.

So if you are looking at these Julon Pinkstons and thinking, I kind of dig those, go over to Zoya Tommy and look at all the ones she has in stock (or check them out on Pinkston's website). You may find that this is art you can afford. And there's a lot more by a lot of different artists available all over Houston. 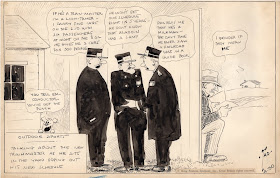 This comic panel by Thomas "Tad" Dorgan is supposedly from 1921. (I guess there will be a trip to the library's newspaper microfilm collections in my future to precisely date it.) Tad was one of the very early newspaper comic strip artists--his first comic strip was in 1902. But his strips didn't appear on the comics page--they were aimed at sports fans and ran on the sports pages. A surprising number of comics strips started out there--the most famous being Mutt & Jeff. Tad never left the sports page. A big boxing fan (indeed, he is in the International Boxing Hall of Fame), he was reportedly a good friend of the great Jack Johnson.

Tad was an excellent cartoonist, but he had a greater affect on the world for being (like Shakespeare) a prolific coiner of idioms, including "dumbbell" (for a stupid person), "for crying out loud," "hard-boiled" (for tough), "drugstore cowboy," and many more.