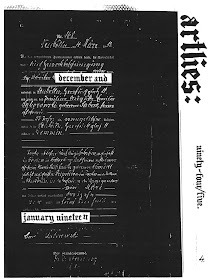 Issue four of ARTlies built off the "degree zero" feel of issue three. The design was still mostly functional, but easier on the eyes than the previous issue. They continued to report from outside Houston (Los Angeles, Austin), and they added a couple of artist's projects to the mix--the cover and inside cover were a political piece by Carol Saborowski (about whom I can find no information online), and the center was an insert by a person of group called "Anti-Trust." Neither impressed me too much, but I like that they were included.

Peter Doroshenko returned this issue with two interviews. In the first, he interviewed French curator Jérôme Sans, followed by him and Sans co-interviewing Paul McCarthy. Doroshenko asked Sans what he thinks about Houston, and Sans talked about how the Houston art community is isolated. Given this bait, you'd think that Doroshenko would change the subject, but he doubled down on Houston! I can totally relate--as a city, we seem very self-absorbed. (I'm guilty of it.) It is in critique of this that such institutions as Skydive and Cargo Space came into being.

Also of note was a review of a three-person show at Lawndale called Buttered Side Up, featuring work by Bill Davenport, Giles Lyon and David Aylsworth. The reviewer, Mark Allen, more-or-less liked the show but criticized Lawndale for hosting it! He saw Lawndale as an alternative space and didn't think this show was alternative enough. After all, all of these artists had shown at commercial galleries.

His description of Davenport's work was quite amusing. "Davenport knows that nothing is more boring than having to look at well-made art, so he's saving us the trouble. Some of the work in the show suffers from trying too hard, but few would voice that objection about Bill." Great stuff, and meant in a complimentary way.

The present, I find as I read old issues of ARTlies, is always echoing the past. Davenport wrote a review recently for Glasstire where he praised an artist's work in similar terms, using phrases like "frightening, frippy nihilism" and "aggressively unimpressive." Unfortunately, the artist didn't get it and was quite angry!