Some Thoughts about Eric Fischl

The fact that they have stomachs that protrude further than their breasts does not stop some women from unmercifully going topless on a beach. Eric Fischl records this indecorous quirk by exaggerating the sway-back on a topless female in a beach scene he is showing in Cast & Drawn at McClain Gallery through May 11. More absurd than the bikini bottom-wearing fat woman is the swishy brush stroke-loose skin on the nude males who stroll self-importantly across the sand. Narrative ambiguity is as much a part of Fischl’s artistic practice as figurative distortion. He leaves the viewer unsure of what is happening. Some thoughts about Fischl inspired this short essay. 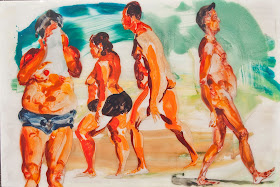 The gallery’s press release sparked memories of my first encounter with Fischl’s 1981 Bad Boy. For an instant my eye was drawn to the parallel lines of light reflected through the window blind, and to the still life in the corner. It quickly became clear that the nude woman lying spread-legged on the bed was exposing herself to the young boy stealing from her purse. When examining this erotic and mysterious composition, the viewer is left uncertain if the woman is the boy’s incestuous mother or an indecent adult with whom he is associated. Either way, something disgraceful is taking place in that bedroom.

In 2011 Fischl lectured at the Glassell School and MFAH’s lecture announcement cited the source of inspiration for paintings such as Bad Boy. It said the artist’s “suburban upbringing provided him with a backdrop of alcoholism and a country-club culture obsessed with image over content. His early work thus became focused on the rift between what was experienced and what could not be said.” Fischl received critical attention, it added, “for depicting the dark, disturbing undercurrents of mainstream American life.”

In other words Fischl’s art savagely exposes American middle-class pretensions. He is fascinated by middle class striving and hypocrisy, and called it “tragic and compelling.” Framed against his words, the beach scene figures’ grandiose poses constitute genteel desperation. 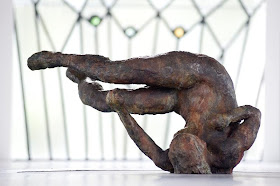 It’s impossible to see Fischl’s 2007 bronze Tumbling Woman II and not think of Degas’s brand of voyeurism, and from the beginning Fischl has been critically linked to Degas. John Russell’s 1986 New York Times invocation of Degas is unequivocal: Degas “sets up a charged situation with his incomparable subtlety of insight and characterization, and then he goes away and leaves us to figure it out as best we can. That is the tactic of Fischl, too, though the society with which he deals has an unstructured brutality and a violence never far from release that are very different from the nicely calibrated cruelties that Degas recorded," Russell wrote.

I find similarity between Degas’s 1874 Interior (The Rape) and Fischl’s Bad Boy. The Venetian blind light patterns that fill the room in Bad Boy mimic closely the floor boards in Degas’s Interior. Bad Boy’s lady’s purse relates to the open suitcase in Interior. In both paintings the male figures’ hands add to our unease, the boy’s hands are behind his back removing an object from the purse, and Degas’s man’s hands are hidden in his pockets in a gesture of discomfort. Most importantly, the paintings have the same degree of psychic tension, Fischl’s with the suggestion of child abuse, and Degas’s with the emotional distress of the undergarment-clad kneeling woman.

The art historian Edward Huttinger wrote that there were two components in Degas’s art which permeated each other: “the great western tradition of Classicism, plus his passionately direct interpretation of the essential phenomena of his own present existence.” This fits Fischl.

Tumbling Woman II follows a line of sculptural works the artist began after New York was attacked. When he first exhibited this art he suffered grief because New Yorkers found the sculptures too painfully derivative of 9/11 victims. The work found acceptance, though--the pieces all sold.

In 2009 Alfred MacAdam wrote in ARTnews that one of Fischl’s bronzes “looks like a Pompeii casting of a person killed by the volcano.” The critic found the sculpture’s surface interesting, noting bronze fragments seemingly chipped off the figure. He also compared some pieces to Baroque religious statuary.

Crossing over from painting to the three dimensional, Fischl captures movement with the same sharp-eyed observation as Degas. 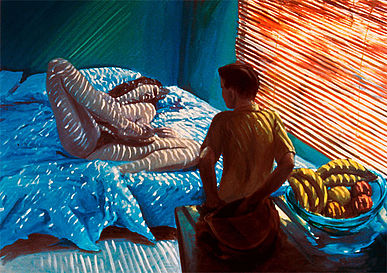