Pop-up shows drive me crazy. You blink and you miss it. And the policy of this blog is primarily to write about shows our readers can see, not shows that happened in the past. It's an expression of humility, believe it or not. We want to say to the reader, here's what we thought, but go see it for yourself. So pop-up shows, which almost by definition can't be reviewed before they're done, are frustrating.

New Paintings by Brandon, Dylan, Guillaume and Isaiah at the MAS Gallery (studio 227) at the Spring Street Studios is a pop-up show. But fortunately, it is lasting more than one day. I saw it Saturday. If you want, you can see it Wednesday between 1 and 5 pm.

Brandon Araujo is a painter about whom I've written recently. The work in this show isn't substantially different from the work in the previous show. He still likes taking a texture and spraypainting it to exaggerate its surface. 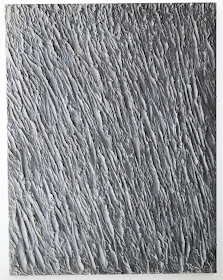 But Araujo doesn't stick to one technique. As a painter, he's like a clothes shopper, trying on different suits in different styles. Whether he will settle on one is the question, but for now it means we can go from a spray-paint on plaster production to a heavily impasto painting like the one below. 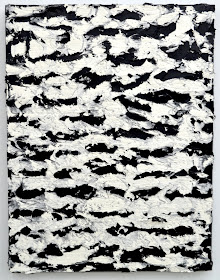 The super-creamy horizontal application of paint reminded me a little of Nick Kersulis' paintings from his recent show at Devin Borden. It's almost like cake icing. 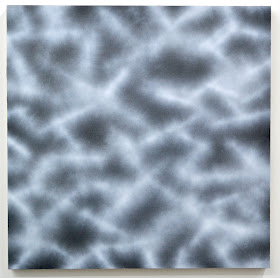 And this piece reminded of some of the recent Jeff Elrods I saw at Texas Gallery. The only commom traits of Araujo's paintings are their black, white and grey palettes and the fact that they are abstractions. I'm not going to say he needs to settle down on one style--I quite liked the variety--but he needs to find his own voice. I liked what I saw here a lot, though. I think Araujo is an artist to watch. Dylan Roberts is someone I had known previously as a painter of highly colorful, highly painterly works. And in I.S.Y.B.N.O.T.I., there is the remnant of something quite colorful, peeking through a large field of white. It's almost as if he is embarrassed by his earlier self, the Philip Guston-like architecture of paint. I don't quite get it--I liked that earlier iteration. But artists gotta evolve. 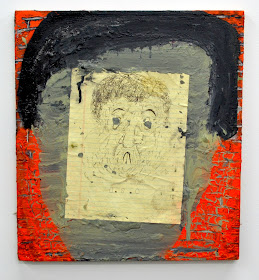 And that evolution can include figuration, as in O.S.O. Roberts pasts a crude drawing of a rather upset-looking face on top of what appears to be a larger painted version of the face. 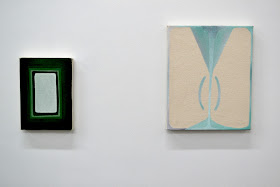 They say you should paint what you like, which suggests that Guillaume Gelot likes pussy. Two of his four paintings in the show focus on that area of anatomy. Cat Dreams is an abstracted beaver shot. 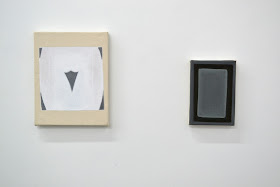 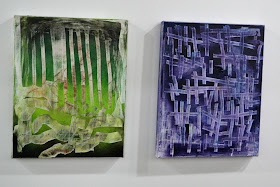 Isaiah López's paintings feel pretty similar to some of Araujo's, except that he adds a color to each one. I'm also reminded a bit of Nathan Green's paintings. 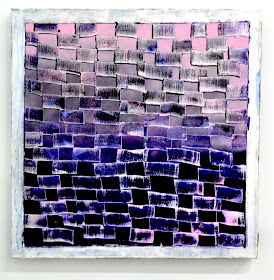 Which is to say that while I found the work pretty likable, it didn't bowl me over with its originality. I don't know how old  López is, but if he's a young artist, I'd call this work a good start. It's enough to make me want to see more. I like the way the paint is applied (and scraped off?). He achieves some interesting visual effects.

All in all, I found this exhibit pretty enjoyable. I don't know where these artists are going next, but they've all interested me enough to follow along.