To help viewers understand Argentine artist Pablo Siquier’s steel sculpture and related drawings, exhibited through July 27, Sicardi Gallery published curatorial notes in the form of an essay by Laura Wellen. Wellen’s piece begins by telling us precisely what Siquier is not, he is not influenced by Argentine post-war geometric abstraction; that art was censored by the military government during his developmental phase. He does take inspiration Siquier said, from Spanish artist Antoni Tàpies, whose artworks have an incongruent, dream-like flavor, as well as from literature, film and music, including John Cage, Beuys, and French writers in translation.

Referents such as these suggest that Siquier considers dissonance and imbalance to be important factors in his art. One senses stridency in 1308, the large sculpture of welded steel that resembles a cage, and causes psychic discomfort by evoking illiberality. “The sculpture is depressing,” I whispered to an artist as I departed the gallery.

The ambiguity that permeates his sculpture, also pervades Siquier’s drawings, which are computer generated designs artistically altered when transferred in charcoal to paper and the gallery’s walls. According to Sicardi’s essay, Siquier enjoys the “tension” between his steel abstraction and its similar but unrelated drawings. 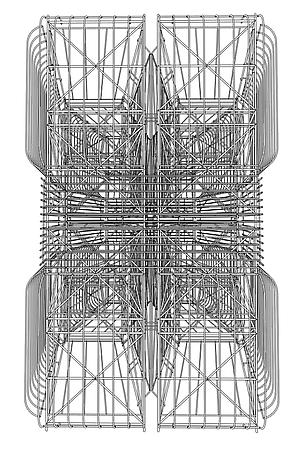 An art historical analogy helps to illustrate Siquier’s improbable associations: “Siquier imagines a dialogue between his drawings and the architectural fancies of Piranesi,” Wellen wrote, “for 1308 he uses carbon steel to break out from clean histories of abstraction, emphasizing instead the materiality of the abstract structure, which he considers somewhat evocative of a prison - or, more precisely, of the romantic idea of a prison, something that also preoccupied Piranesi.” This allusion to Piranesi’s visual distortions, which took the form of architectural ruins, fictitious structures and atmospheric prisons, brought to mind something I read in Nobel laureate Orhan Pamuk’s Istanbul: Memories and the City. “What crushes people in Piranesi’s engravings,” Pamuk wrote, “is the dramatic violence of his architectural perpendiculars.” Like Piranesi’s, Siquier’s perpendiculars are implausible. “Siquier celebrates the messiness of interpretive relationships,” Wellen wrote.

In 2005 the artist had a solo exhibition of paintings and wall murals at the Museo Nacional Centro de Arte Reina Sofia which generated curatorial elaborations. A point made in Madrid and regurgitated by many writers is that Siquier’s art re-figures Buenos Aires’ art nouveau architecture. “The precise lines of Pablo Siquier’s black-and-white paintings are derived from Art Deco architectural ornament,” Holland Cotter honked in the New York Times. But architectural design motifs are a small part Siquier’s dialogue with Buenos Aires; his art also rubs against the city’s cultural and political realities. Its refashioning of the urban environment and broader concerns is the reason Wellen said Siquier’s images are “placeless,” and inhabit a space that is “physical and mental.”

Within the context of a more expansive link to Buenos Aries, I anchor Siquier’s art to the metaphysical discourses of Borges and Xul Solar. Jorge Borges’ narratives cite Buenos Aries while also looking to wider perspectives. They address universal existential concerns, using an imaginary fantastical style, often set in magical realms. One story features the recurring image of a labyrinth. Siquier’s visual disassembling correlates with Borges’ elastic poetic consciousness. Given Borges’ stature in Argentina and globally, he is an unavoidable precedent. It is unsurprising Sicardi’s press release said Siquier’s images “evoked expansive labyrinths.” Borges’ friend Xul Solar painted mysterious images which Borges called “documents of the extraterrestrial world,” perhaps in an attempt to break through to a truer reality. His other worldly cityscapes often contain motifs of disarranged roads and ladders stretched in improbable directions. Solar preceded Siquier with a retrospective at Madrid’s Reina Sofía Museum in 2000. Even if the younger artist was not directly influenced by Solar’s art, he would have absorbed its strangeness.

Siquier’s artist statement, prominently framed in the gallery notes and on its website, seems to endorse these analogies. “Somehow, by breaking with harmonious and balanced equilibrium, I wanted to express or shed light on a certain strangeness, a certain surprise.”