After supper at Forrest Bess' house at the mouth of Chinquapin Bayou (surely the loneliest spot in Texas), we all went into the shipshape studio to drink tequila and coffee and look at our host's pictures.

That is the opening sentence of an article called "Trawling in the Collective Subconscious at Chinquapin" by the great Houston newspaper columnist Sigman Byrd. It was published on Sunday, March 11, 1956 in the Houston Chronicle. Byrd is one of the very few writers who actually went out and visited Bess in his shack on East Matagorda Bay and wrote about it. (I went to the microfilm library at the University of Houston to read this column as research for an article chronicling a trip to East Matagorda Bay in search of Bess's home.) I greatly admire both Bess and Byrd and was delighted when I learned they had met. That opening sentence, so unlike a good, solid J-school-approved opener, shows why Byrd is such a great writer. He throws us right into the middle of his story with no explanation; he uses an unusual word "shipshape" which happens to describe Bess' studio (which apparently had a concrete "prow"); he mixes tequila and coffee in a family newspaper. (Literally a family newspaper--that was the Houston Chronicle's motto at the time--"Houston's Family Newspaper".)

Byrd was a newspaper columnist who specialized in telling human stories about folks who lived in places where polite middle-class white folks seldom went. He was surely one of the few Houston writers of the 1950s to regularly write about African American and Hispanic subjects. He also was willing to write sympathetically about ex-cons, petty criminals, prostitutes and other denizens of the demimonde. There is one great collection of his columns, Sig Byrd's Houston

, which is of course long out of print. (I wrote about it on my old blog back in 2009.) Byrd wrote a classic column called "The Stroller" in the 40s and 50s for the old Houston Press newspaper (back when Houston had three daily papers). Robert Kimberley has been scanning these for a while now and you can read a lot of them on Flickr.

By the time he wrote about Bess, he was working for the Chronicle, where he would stay until 1964. The Chronicle was not so interested in Byrd's stories of low-life and put him on a farm/rural beat. And maybe that's why he wrote about Bess, an eccentric (which would have appealed to Byrd) in an extremely rural setting. I looked up this old article because I was researching the location of Bess's shack for an article I wrote for Glasstire.

Byrd is bemused, and the work is a bit beyond his ken. He was a little too street to have much understanding or sympathy for abstract painting--his appreciation of Bess is strictly on the basis of Bess's status as a likeable oddball.


Forest [sic] calls his paintings ideograms--"pictures that talk back to the other part of our natures." They are filled with symbols trawled up from the muddy bottom of what this fishmonger-artist calls "the collective subconscious."

If I dig this cat--and I'm not sure I do--he first dreams these pictures while sleeping of lying half-asleep and listening to the Matagorda wind and waves. Then he puts them on canvas in bold form and color. And finally he searches out the meaning of his symbology in the literature of mythology, alchemy and Jungian psychology.

Byrd visited Bess with Jack Akridge, a plumber from Pasadena, and  his wife. Akridge was a collector--he already had two Bess paintings and was buying a third on an installment plan.Bess was delighted to include a plumber among his collectors.

Byrd recounts their discussion of one painting in particular.


Then he called our attention to a curious painting in which a couple of dozen unidentified quadrupeds ranged a grey prairie under a pendulous cloud. "Most people get sleepy when they look at this," he said.

Sure enough, Earl [a local fisherman] and Mrs. Akridge started yawning. Not me, though. "Several days after I did this one," said Forest, "I discovered that what you call a cloud is a uvula--the lobe at the end of the roof of the mouth. You are looking at a yawn. What do the small animals suggest to you?"

"They're sheep to be counted while yawning," said the artist. "I call this Sleep."

As soon as I read that description, I knew the painting he was talking about, which is now referred to as Untitled (No. 31). 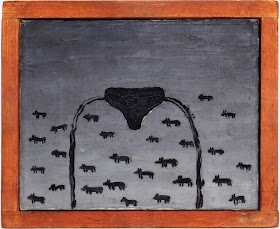 This painting is on display at the Menil through August 18 as part of Forest Bess: Seeing Things Invisible. I reviewed this show and wrote about this painting in particular--but certainly didn't see it in the way that Bess described it to Byrd!