A Certain Voluntary Association of Artists

Someone, often an artist, owns or has access to a space that can be subdivided into studios. Maybe it was a warehouse once upon a time. The space is rented out to other artists. These artists need space to do their work. You end up with buildings devoted to the production of art. These buildings come into being for awhile, are inhabited by artists, then go away. If you own one of these buildings, artists renting it is just a way to keep cash flowing in after the building has outlived its original industrial/warehouse use but before the neighborhood gets gentrified. The building's occupation by artists is just a part of its journey. But for the artists who work there (and sometimes surreptitiously live there), this building can become the site of a community where ideas evolve and are traded, where work is critiqued by one's peers, where collaborative works can be initiated.

Commerce Street Artist Warehouse was a legendary space founded by Rick Lowe, Wes Hicks, Kevin Cunningham, Deborah Moore and Robert Campbell in 1985. If a certain era of Houston's art history can be said to have culminated with the Fresh Paint show in 1985, then another era can be said to have begun with the establishment of CSAW that same year. Many of Houston's best artists worked there at one time or another, and the energy seems to have been tremendous. But that ended in 2008 when artists were forced to move out. (The story is told here, here and here.) Some of the artists who left were Michael Henderson, Kathy Kelley, Whitney Riley, Teresa O’Connor, Elaine Bradford and Young Min Kang. They quickly found a new space, where they hoped to avoid the latter-day mistakes of CSAW. In February 2008, they moved into an old storefront on Harrisburg at Cesar Chavez. This new space was Box 13. 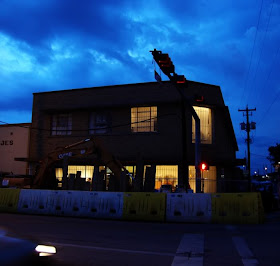 I first encountered the Box in 2009, right when I was starting this blog. As a studio space, it has its problems. The A/C apparently is never very cool in some studio spaces. The studios didn't have doors initially. It's a bit off the beaten path. And there are lots of other studio spaces in town--artists are not starved for choice. There's Winter Street, Spring Street, Summer Street, Hardy &amp; Nance, the Houston Foundry, Independence Studios, Mother Dog Studios, El Rincón Social, and probably others I'm blanking on. A friend of mine was looking around for studio space and checked out Spring Street Studios. He was tempted by its spacious hallways--ideal for exhibiting work--and efficient air-conditioning. It was clean and nice. But he chose Box 13. Because in the end, a studio is not a building. It's a group of artists. And Box 13 was where the artists he wanted to share space with were.

Therefore, it makes sense that Art League would be interested in hosting a Box 13 show. It's not like the Box 13 artists are a collective, nor could it be said that they have much in common with each other, except perhaps for a certain conceptual approach. And their membership is continually in flux. But perhaps more than any other studio in town, except for maybe El Rincón Social, Box 13 has an adventurous, exciting program of exhibits, including exhibits of its own members' work.

The Trojan Box, the show of Box 13 artists at The Art League, is uncurated. Essentially artists were told to bring in work and that's what got shown. While there is work in the show that I would never have thought about exhibiting together (David McClain's painting and Quinn Hagood's objects, for example), overall my impression is that it works. There is an overall high level of quality that strikes one and helps paper over the occasionally conflicting aesthetic values of the individual pieces. 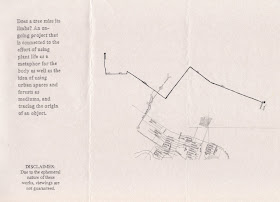 Daniel Bertalot hand drew maps and hand lettered little statements in pencil on newsprint, which were given away at the opening. The work involved in creating these giveaways must have been tremendous. I thought the statement was a little over-determining. It explained too much. But it was beautifully lettered. The map was drawn do small I had to use a magnifying glass to read it. (This probably says more about my old eyes than anything else.) But aside from that, it was a perfectly useful if eccentric map. The day after the opening, I followed it to where it lead, over in the Second Ward. 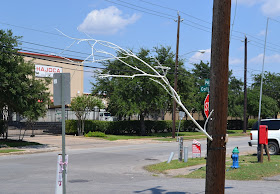 Daniel Bertalot, one of the Ghost Limbs

This is what I found. He had taken a tree branch, stripped it of leaves and painted it white, and attached it to a telephone pole. The title Ghost Limbs was literal. A ghostly white limb was reattached to a thing that had once been a tree. Clever and beautiful. In addition to what Bertalot wrote in his explanation, I was also reminded of "ghost bikes," the white painted bicycles left in spots where a cyclist was killed by a car. The idea that a place or object is "haunted" by its history is given a kind of literal representation in this piece. Also, I liked that the piece wasn't "complete" until the viewer went on a little exploration. How many recipients of the map (which were all given away on opening night) followed through? If you got one of these maps, did you follow it to the end? Let me know in the comments. 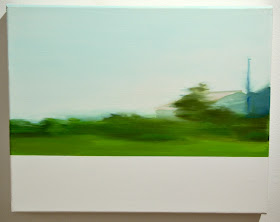 I don't understand the title of Michelle Chen Dubose's Labyrinth, but the subject matter is clear enough--a blurred landscape, as if from a photo taken from of swiftly moving car. The image of the landscape takes the top two thirds of the canvas. The bottom third is left white. The white area is an area of absence, including an absence of motion, which placed under the landscape portion makes it seem as if it is speeding by all the faster. When you see a "blurred" painting, you are likely to think of Gerhard Richter. But in Michelle Chen's case, I think more of Italian futurist painters like Giacomo Balla and Umberto Boccioni, who tried so hard to depict motion early in the 20th century. For them, the blur had not yet become a universal shorthand for motion. Now, anyone looking at Labyrinth will see a depiction of speed. 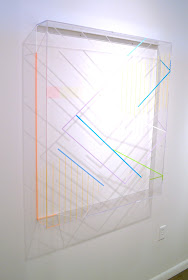 Describing the materials in Jonathan Leach's "W.F." as "acrylic on plexiglass" isn't the whole story. A lot of the lines on the surface of "W.F." are inscribed or etched into the surface of the plexiglass. They make a visible line on the surface and cast a shadow on the wall behind. And the shadow itself is a big part of what you see. Looking at it, I wonder if Leach had control over the lighting. Did he place the track light in just the right spot to cast just the right shadows? "W.F." is kind of a barely-there painting. The thin painted lines and thin inscribed lines cover a minimal part of the surface of the plexiglass. Leach is heading into Larry Bell territory here. "W.F." is an ethereal art machine. 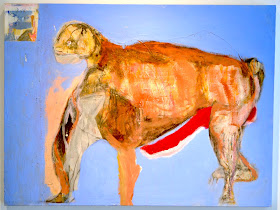 The extreme opposite of "W.F." is David McClain's painting. I was impressed when I saw it--the raw Baselitz-like painting felt like the real thing and not a pastiche of earlier expressionist work. I make this distinction because I think it's hard to make convincing work that has the ability to shock. But I was startled by this, even before I noticed the giant angry red cock. (In fact, I don't think the cock was necessary, really.) This muscular animal strides out of the sky into your nightmare. It is a very strong image. But then reading the materials made me go "ew." There are no circumstances where it is OK for David McClain's jiz to enter my conscious awareness, even in passing. Thanks a lot, McClain. 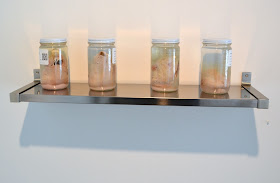 Perhaps the horror of McClain's painting make it the right piece to hang next to Quinn Hagood's ultra-disturbing installation. It consists of our labeled jars filled with liquid and some chicken-like flesh. 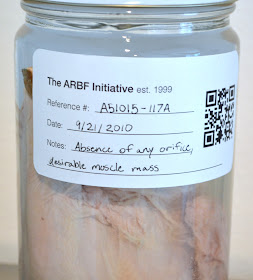 The labels indicate that these are lab experiments of some kind. The main thing seemed to be whether or not the "muscle mass" was "desirable" or "undesireable." It's impossible to look at these without feeling queasy. At the same time, you ask yourself what the hell? Is this art? Is Hagood creating a pastiche of a science experiment? 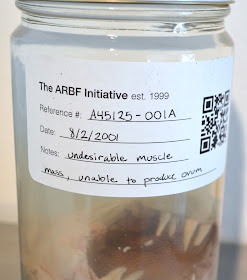 The words "ARBF Initiative" provide a clue. The ARBF Initiative has a website which describes its scientific mission. It is seeking to create a chicken-like organism that solves the many problems associated with the factory farming of chickens (the cruelty or it, especially). It seeks to create the following organism:

Organism able to regulate immune system without the assistance of antibiotics

Organism’s tissues less undesirable for consumers to prepare and serve

Rudimentary brain capable of only basic respiratory and cardiac functions

Elimination of all appendages, complex organs, and tissues not required for egg production

This sounds pretty sick, but when you consider that cow muscle has been grown in a laboratory, it's not out of the realm of possibility. Margaret Atwood's novel Oryx and Crake

is built around the premise of such bizarre genetically modified organisms (she even includes a chicken-derived GMO designed to create chicken McNuggets). That's what I think is going on here--the ARBF Initiative is a fiction like Oryx and Crake, but one designed to be convincingly real. Of course, putting these things in an art show reminds you of their fictional nature. But that knowledge doesn't make me feel any less queasy for looking at them. Given the rise of so-called "ag gag" laws, convincing fictions may be the only way to have public discussions of these issues. 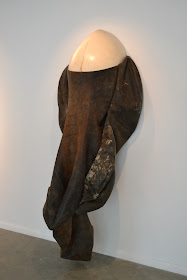 The third piece in the "freaky animal trilogy" is Kathy Kelley's i am drowning in the silent stillness of unwritten posts, which may remind you of a piebald elephant head. Or an alien space suit. It has a palpable presence that makes you think it is a thing, not an abstract three-dimensional form. It uses her favorite material--reclaimed rubber from old innertubes--but adds what is to me a new element--the white top. It was made with plaster and polished with wax, giving it a bone or ivory-like quality. I won't say i am drowning in the silent stillness of unwritten posts is beautiful, but it is compelling. I have to look at it--it really dominates the room. (An amazing achievement considering that the room is full of very interesting artworks.) And at the risk of sounding like Charles Kinbote, the title of this piece describes something I personally experience on a regular basis. 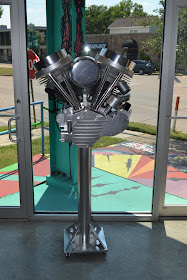 A work seemingly designed to excite my Kinbote-like impulses is Dennis Harper's The Great Pan Head Is Dead. This is actually a part of a larger artwork, Motorcycle, that Harper disassembled. (I showed Motorcycle in a show I curated called Pan Y Circos in 2011.) Weirdly enough, it is the second motorcycle engine artwork I've seen--James Drake did one, too. Harper's is bigger and shinier, and more important, it references my blog. What critic could ask for more?

These are just a few of the impressive works in the exhibit. It's a cornucopia of interesting artwork. I could have picked seven other pieces to write about from this show that are just as interesting and visually compelling as the pieces I chose to write about here. The overall level of quality is that high. The Trojan Box is on display through September 20 at the Art League.