At Sea With Larsen and Connor

States of Matter is a fairly nondescript name for this show of work by Dylan Connor and Alex Larsen at Avis Frank Gallery. I'm not sure I could have come up with a better name, but both artists have work that references the ocean or the seaside. And curiously, that's the feeling I get with this work--the feeling of walking along the waterfront or in a port. For example, Red Snapper, aside from being named after a delicious Gulf fish, looks like a wave frozen in space. It is actually a plaster cast of some kind, but I can't tell exactly how Connor made it. But one telling feature are the streaks of rust against the bleached whiteness of the plaster. That kind of rust reminds me my own time at sea and in ports, where the salty sea and windblown sand were slowly corroding just about everything. 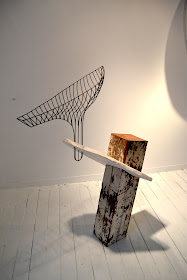 And wooden pilings might have been painted once or maybe a hundred times, but they always looked like the heavy wooden element in Alex Larsen's Tidal (I), which also includes a metal model of what looks like a sailboat hull. I don't know much about Larsen or Connor, but if I had to guess, I'd guess they live in Galveston or somewhere along the coast or Galveston Bay. I hear waves lapping against the pier when I look at this work. 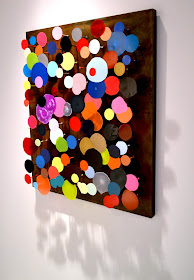 I risk overstating this shoreline feeling, though. A lot of Larsen's work in the show was like Extrusion Study: Crapshoot. These "extrusions" seem like a result of process that Larsen has developed. (The same could be said about Connor's casts.) They appear to be made of colored plastic that was liquified, poured, and then solidified mid-pour. They end up becoming very delicate-looking flower-like objects. 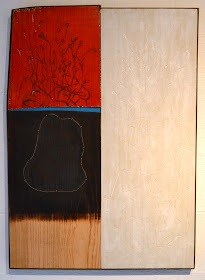 Larsen even included an old-fashioned picture among his works, Scribe. This lovely small abstraction feels a little out of place in this show, whose pieces otherwise seem so highly dependent on the process of their making for their final form. But so what? Scribe, with its rough rectangles of color and inscribed linework, is a beautiful piece. The enclosed form in the black rectangle reminded me specifically of Forrest Bess. Perhaps the spermatozoa in the red and white areas have a relationship to Bess's work as well. (But maybe I'm seeing Bess here because Bess has been on my mind so much lately.) 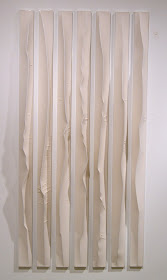 Less smooth and sinuous than Red Snapper, this piece is appropriately named Whitecaps. The wind has picked up and the bay has gotten a little choppy. Notice the "wrinkles" in the sides of each vertical element. I think this is a clue to Connor's process. 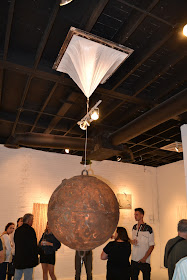 We see more of Connor's technique here. The molds for his plaster and gypsum polymer objects seem to be made partly of stretched fabric of some kind. In Polar Opposites, this gives the illusion of great tension, as if the buoy in the center is pulling the two anchoring elements tightly. 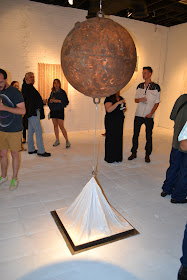 It has the effect of focusing the viewer on the buoy and its beautiful rusted surface. Polar Opposites is a spectacular piece of work. But it's one of those pieces that when you see it in a commercial gallery, you think, this a piece that demands a lot from whoever possesses it. How would a collector even display that? 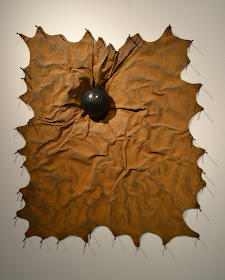 That's a question you would also ask about Material Collision by Alex Larsen. Here Larson, like Connor, is playing with the idea of fabric frozen into rigidity. Where Connor uses plaster and gypsum polymer, Larsen uses steel. But the thing is that the black sphere is sunk into this otherwise fairly flat piece of steel, as if it were a cannonball that had been fired into it. It reminds me of illustrations you sometimes see of spacetime around heavy objects like stars, except that they always depict spacetime as being smooth, like a sheet of rubber. But maybe its more like this, wrinkled and irregular, a little rusty and aged (which is OK, what with space being 13.7 billion years old). 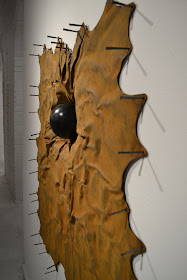 So the collector who buys this piece literally has to poke a hole in her wall to display it. Well, what's a little sheetrock when you can display something this grand in your home? It's really a magnificent piece--Material Collision and Polar Opposites are the two most exciting pieces in this excellent exhibit.