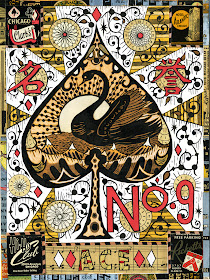 Tony Fitzpatrick is not only a really good artist, he is a goddamn excellent writer. In case you've forgotten. Here's a paragraph from his latest--and some good advice to artists.


My father, for the life of him, could not figure out how a person was going to make a living drawing pictures—what I mistook for anger was actually fear. My parents were children of the Depression, and all around them, real Americans starved to death outside of grocery stores. Poverty was not an abstraction—but a palpable and ever-present entity with definable features. It wasn’t happening to someone else, but to their neighbors and relatives. What he feared is I would be unable to support myself.

When I finally told him I wouldn’t do anything but draw pictures because it was the only thing that meant anything to me—he pulled the car over and pointed in my face and hollered, ”Then do it like you’re fighting a war, like your life depends on it!” I said “what do you mean?” He looked at me and said very evenly, “Not one step backwards.” ("Dome Stories: The Black Swans, Tony Fitzpatrick, August 14, 2013, New City)

I love the Bungle Family, a comic strip that ran 1914 until the '40s.  It was a successful strip, but one of many that was soon forgotten after Harry Tuthill shut it down and retired. I discovered it in Smithsonian Collection of Newspaper Comics

, edited by the late Bill Blackbeard. Now an article he wrote about the Bungle Family for Hogan's Alley magazine has been posted online (I can't date the article, but it was from Hogan's Alley issue 13).


Tuthill’s simply sketched characters appeared only in their apartment house setting for days on end, all but engulfed for much of their static strip existence in 14- and 15-line dialogue balloons, emerging only at some briefly climactic point in the dullest possible urban locales, often in a surprising slapstick turn, but one quickly abandoned for a return to the delightfully funny and acerbic dialogue that was the real mainstay of the strip. [...] It all read like a deft, daft soap opera set in Purgatory with no time out for good intentions. ("When the Bungles Mixed It Up with Their Neighbors on the Battlegrounds of Sunken Heights," Bill Blackbeard, Hogan's Alley #13)

I have several Harry Tuthill originals. They are amazingly inexpensive.