A Talk with Danielle Frankenthal

Recently a New York gallery published a video of Danielle Frankenthal discussing her art in her New Jersey studio, and when I watched it I realized I had been ignorant of a particular element of her process. The artist applies paint to both sides, not just one, of the acrylic resin panels that make up her paintings. As she explained in the video, to paint both sides of three transparent panels gives her six painted surfaces through which light can penetrate. Wall-mounted with space between them, the plastic panels and their acrylic paint reflect light quite dramatically. Misunderstanding the significance of light reflection, I once wrote amateurishly that paint in Frankenthal’s art, “seems to float.” 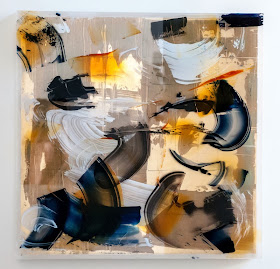 I talked to Frankenthal during the opening reception of Turbulence, her solo exhibition at Wade Wilson Art (through December 20) and sensed her composure masked a slightly breathless state, not unsurprising given the fact that she was also exhibiting in Contemporary Arts Museum’s group exhibition Outside the Lines: UIA (Unlikely Iterations of the Abstract), which had opened the evening before. Outside the Lines marks the 65th anniversary of the CAMH’s October 31, 1948 inaugural exhibition. I missed CAMH’s opening, but figured the evening would be somewhat ceremonial when I read this officious line in the invitation: “Reading of Mayoral Proclamation: 6:30pm.”

If Frankenthal felt overwhelmed by gallery and museum installation, stacked openings, after-parties and dinners, a gallery talk with Bill Arning as a panelist, and collectors to tend to, that would be natural. So it was unnecessary for her to apologize for not calling after having written, “Virginia, I’ll be in Houston from 10/22 – 11/9, installing at the CAMH,,.would love to have a drink and get caught up, Danielle.”

My dear, you are forgiven!

Having collectors present at her opening did not stop her from answering a few questions:

Virginia Billeaud Anderson: Do the ten paintings in Turbulence reflect any change from your previous handling of plastic?

Danielle Frankenthal: There’s a slight difference. Some pieces, Turbulence 6 for example, I covered the furthest panel entirely with paint. The panels are painted with “metal gilding,” so the furthest one appears solid, and naturally interacts differently with light and with the two closer panels.

VBA: Another slight difference is your use of cool tones. Turbulence’s ultramarines and ceruleans remind me of the lovely dark olive green you used in the Camelot series.

VBA: Your titles occasionally give clues to artistic inspiration. The series Chaos Contained (2011) evolved from an improved emotional state that came ten years after the trauma of watching the Twin Towers destroyed. You called the warm colors in Chaos Contained “embers,” and said they were “a positive thing that provides light and energy,” contrasted to the charcoal-like tones in the previous 9/11 series, one of which I saw. It was horrific.

DF: You know some collectors didn’t get that.

DF: Years after the horror, the fire had become an ember.

VBA: Did you know one of your Embers paintings charmed a critic when you showed it in Wade’s 2011 group show Blurring Lines? Houston Press’s Altamese Osborne called it “the darling of the night,” and wrote it “drew the most eyes.” Danielle I’m wondering if a significant event inspired the art in Turbulence.

DF: You know, we were stuck in Sandy. Hoboken where we live is in a flood plane and we were trapped there in 10 feet of water, David and I, and the water was gray and swishy with stuff in it. I think the art grew out of hurricane Sandy.

VBA: I remember your mayor issued a request for citizens to bring their boats to City Hall to help evacuate people from the condos and brownstones.

DF: Hoboken is a tight-knit community, and the town rallied, we could go to the church to plug in our phones. We ended up staying with friends on Long Island. David and I live on the third floor, and the elevator did not operate for 5 months. I remember I wanted my husband to have a Xmas tree, a real one, well I had lost my car in the flood, and using a borrowed car I went out and bought a tree, but couldn’t get it up-stairs. Our existence is endlessly turbulent, the reality we live in, these times are turbulent, but never without hope. I remember feeling so cold, everything was damp and cold, and then, months later the water receded, and the sun came out and it was warm again, never without hope. 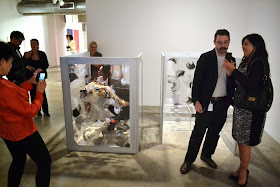 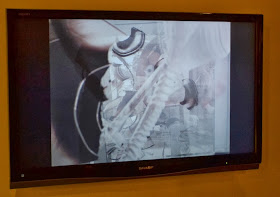