I want to quote the description of Exile, an exhibit at El Rincón Social. This ran on their Facebook invitation to the event.


Exile explores the boundaries between individual expression and the disintegration of human traces on the economic, social, and political field. The artists featured in this exhibition use artifacts as a means to evoke the obscurity of this disintegration — exploring with materials to communicate and testify to a suppressed history. Exile presents works that recontextualize exiled historical narratives into present personal narratives.

Stripping away the boundaries of genres, these works internally remap the notion of a frontier as a mode of resistance. Incorporating found materials, optic distortions, photography, video, and paintings recounting art historical tales, the artists emphasize the weight of personal accounts to disrupt the structures of image making. Resulting in questions of the self, the psychological landscapes developed in these works denote a regenerative introspection.

Reader, do you have any idea what this means? If so, I invite you to translate this into ordinary English in the comments. It made me think there were three possibilities. First, that it was deliberately obfuscatory, which would be a dick move. Second, that it was badly written, but not on purpose. And third, I'm dumb. (While option three is obviously true, I think options one and two are also possible.) Whichever the case, this text made me want to not see the exhibit.

But Saturday night rolled around and I  decided to check it out despite all. And did the things I saw there have anything to do with the statement above? Was there any "regenerative introspection"? Were "exiled historical narratives recontextualized"? Did this art "remap the notion of a frontier as a mode of resistance"? Fuck if I know, but maybe you can decide when you see some photos of some of the work. 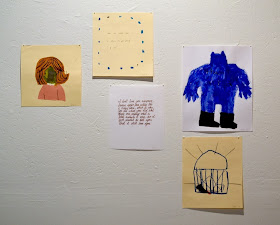 Robert Nava has a suite of small drawings that, with the exception of the text piece in the center, are deliberately childlike. When I write "childlike," I don't mean "done in a charmingly naif fashion," I mean in imitation of actual tropes of children's drawings. Take a look at the work he has on his website--it's more of the same as you see here, but both the subject matter and the visual problem solving are based around things a 1st grade teacher would find common. 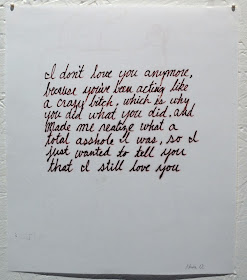 Then there is Love Circle, which is a little more "adult"--or at least adolescent--than the other drawings. It's a funny transcription of a thought process. The irony is the thought that this note would have been sent to the writer's beloved. It's like when someone says, "Did I just say that out loud?"

I'd like to address Nava's work within the stated purpose of the show, but since I don't  understand the purpose, let me simply say that it seems very unlike the other work in this eclectic gathering. But the same could be said of most of the work. There were however several pieces that had a similar vibe--a grungy bricolage that reflected El Rincón Social itself. 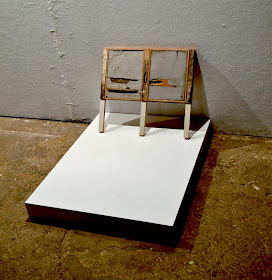 Like Darwin Arevalo's untitled piece, dwarfed by its own pedestal, casually leaning against a wall. Cement on scrap wood by all appearances. All you can say about this is that it is art. As Arthur Danto said, it embodies an idea. But what idea is not something we viewers are privy to. But at least we know its art because it's on a plinth and it's in an art show. 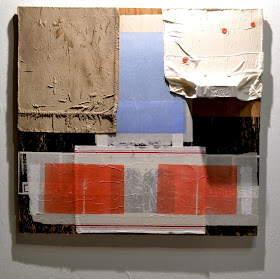 Oscar Rene Cornejo's Horizonte is even easier to see as art. It has formal qualities we associate with art--composition, art materials, and it hangs on a wall like a painting. And it is a painting except for its use of non-painting materials. But that barrier was broken long ago--and one of those who broke it was Rauschenberg. He didn't shy away from using paint, but he'd put anything on the wall. Whatever else Horizonte is, it is a work that recalls Rauschenberg--so much so that it comes across as an homage. Even the xerox element reminds one of the crude half-tone silk-screen elements in many of Rauschenberg's best known works. And the bricolage elements of course recall Rauschenberg.

Cenizas Bajo Los Comales by Sandra Cornejo contains three parts, each with a dark bottom half, a lighter top half, and a dark line extending up into the lighter half. So they appear to be three drawings, basically. They could be read as landscapes with single monoliths rising from the horizons. Both the light and dark parts are pretty dark--the values of light and dark here are actually quite close. It gives the images a menacing crepuscular appearance, as if these were three distant views of Barad-dûr. But actually I have no idea if these are meant to be landscapes at all, or if they are simply three similar abstract images. The title means "ashes on the griddles." A comal is usually made of cast iron but they can be made of clay. Can one be made of slate? Could these, in fact, be objects that had been used for cooking? In which case, the colors would be the burned remnants of whatever was cooked on them. I like that they could be interpretation is inherently ambiguous here--meals cooked, a geometric form, a menacing tower. 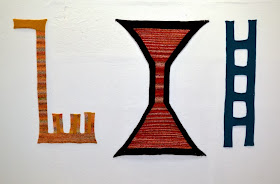 For some reason, there are a lot of three-part works in this show.  Cenizas Bajo Los Comales faces Key, Keeper, Connector by Caroline Chandler. The "key" and the "connector" are easy enough to understand. I don't quite get the "keeper" part. Drawn like this, they also resemble letters of an alphabet similar to but not identical to ours. A code perhaps. Therefore the three together look like a word. And if it is a coded words, the title is quite suggestive. But again, Key, Keeper, Connector defies simple interpretation. After all, the fact that it is knit or crocheted out of yarn is obviously important--why else use such a laborious technique? Like so much of the work in this exhibit, it's a head-scratcher.  But it's the kind of enigma that is quite pleasing. At least, it is to me.

It's probably hard to tell in this photo, but the left and right panels of Rushern Baker's untitled triptych are mirror images. Each depicts a parallelogram that looks like a floating square that has been angled to the viewer. One is black and one is silver. They both seem to be floating in space against the sky--a day sky on the left and a night sky on the right. The middle image seems completely abstract, although I guess it could be said to be showing a morning or evening sky seen from within a hole. In any case, all three images are very painterly with some thick impasto, and all three seem slightly menacing and uncanny, just as Cenizas Bajo Los Comales did. I liked that about them. So near Halloween, it's nice to be a little spooked. 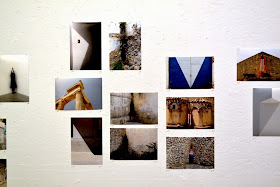 Blanka Amezkua, selections from Corners and Body series, 2011-the present, 6 x 9 inches each

Not all the art in the show is assemblage or painting. There is some lens-based art, such as the photos by Blanka Amezkua from her Corners and Body series. In most of these, there is an architectural corner in which someone (Amezkua?) is standing facing the corner with her hands above her head as if she is about to take off, Superman style. You can see a lot more of these images here. The odd thing about the prints was that they seemed to be on some kind of silvery paper, so any "white" that showed through in the images appeared silver. (This quality doesn't come through in the photo here.)

The two Double Quadruple Etcetera Etcetera videos by Sondra Perry were among my favorite pieces in the show. In them, a person with dreadlocks is dancing frenetically. It's like the dancing you'd see in the audience of a hardcore punk band back in the 80s. The body of the dancer is cunningly blurred. The video is silent, which gives it the feeling of a surveillance video. The setting is in the corner of a mostly featureless white room. It has an institutional appearance.

Given all this, what are we seeing? In a way, the dancing figure has an unreality about him that might remind you of the supernatural character Sadako in the film Ringu. It's a deeply disturbing, uncanny image--a good part of what makes this movie so terrifying. But at the same time, the frenetic blurred movements might make you think of the Tasmanian Devil in the old Warner Brothers cartoons. It is a simultaneously disturbing and funny image, equal parts horror movie and Saturday morning cartoon. 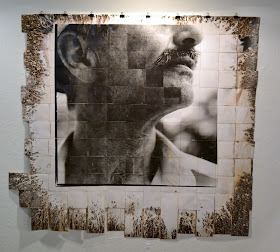 This gigantic photo-mosaic portrait by David Salinas was another favorite. Ed is so massive that his face won't even fit into this large frame. The splatter along the edge of the image also hints at Ed's massiveness--he's literally exploding out of the box he's in. This image is a warm celebration of "Ed," a guy who has been around the block a few times. He's seen some shit. It's a heroic image of an ordinary man.

These are just some of the twenty-one works by eighteen artists in the show. Do these heterogeneous pieces of art have anything in common? Beyond the nonsensical statement, is there any theme or concept here? If anything, I'd say they share a modesty and rough-hewn home-made quality. I wouldn't want to see this in a sleeker white cube gallery. But in El Rincón Social, they look just right.