From Here to Afternoon: Labor and Formalities

Revealing and the concealment of information: it’s a formidable issue that artists and curators alike frequently contend with in presenting to the public. Places like the CAMH or the MFAH, for instance, provide detailed museum placards laying out the exhibition’s historical context or even outright meaning of the work. Most galleries provide some sort of handout, again rooting the work and/or the artist(s) within a particular context. Places like the Menil, on the other hand, provide very little information to the viewer other than the title, year, and artist, greatly entrusting the viewer to enact meaning onto the work—for better or worse. Patrik Haggren and Mikhail Lylov's latest curatorial effort From Here to Afternoon, up now at Glassell, somehow jockeys these two positions. 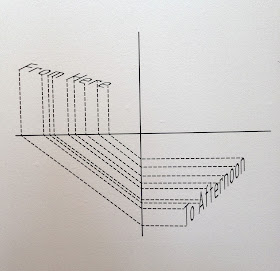 Albeit written in somewhat ambiguous and fairly impenetrable language, Haggren and Lylov do provide a written document explicating the context and meaning of the exhibition. Also, there are writings scattered throughout the space that functionally anchor and appropriately provide context, and even meditate on a contemporary art exhibit’s positioning within modes of labor and efficiency. But given their equivalence in scale to and spacing between the actual artworks, the writings seem to bear their own weight as autonomous art forms, and work surprisingly well as such. The transmutation of written explanation to art object is a surprising and innovative move that simultaneously informs and subverts meaning—a smart ambiguity that relies on the viewer to fill in the blanks. Another notable treatment (or lack thereof) of the space is the omission of artist and title placards. The result is a cohesive and deeply nuanced yet nebulous grouping: a curation drafted as an unintentional collaboration between artists. While totally practical and probably necessary, it makes the image list attached to the handout seem almost disappointing. 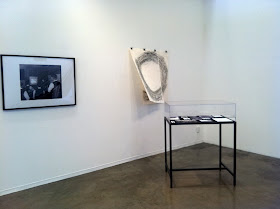 Placing trust in the viewer to properly engage with the work is a respectable although risky move here—this is an exhibition that requires time. Lots of it. With its text-heavy, historicized, and intellectual agenda, glazing over the work and shrugging it off as an exploration of the banalities and dignity of labor as well as the manipulation of its laborers seems like a tempting prospect. This isn’t fresh territory, after all. Between the Touch Sanitation (1970-80) project of Mierle Laderman Ukeles, Vito Acconci’s Step Piece (1970), or even Houston’s currently running Shrimp Boat Project, effort used as both a material and concept in art has been in play at the very least since the post-minimalists. Fortunately, for the viewer and Haggren/Lylov alike, it doesn’t take too long to realize that in this situation, labor is instead used as a stepping-stone to engender abstraction and formal concerns. 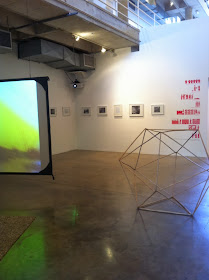 That’s not to say that these issues aren’t prevalent in the work, or aren’t meant to be included, or shouldn’t be a part of the work. It’s that they immanently present themselves through a corroboration of visual and textual abstractions resulting from actual systems of efficiency, like the photographic motion studies of Lillian and Frank Gilbreth, speech conducting, and shipping containers, just to name a few. One clear example of this is the Laban-Lawrence studies of rhythm and labor, examined here through the lens of Romana Schmalisch. She uses these studies, conducted and published mostly in the 1940s, to explore the texture and rhetoric of efficiency, the most effective of which is Notation of Efficiency (2013). Situated in its own cozy dark room, the piece consists of a single slide projector, operating as an outmoded PowerPoint presentation. It’s a sequence of facts, visual aids, and Laban-Lawrence diagrams that hardly make any sense to the layperson. While seeming to do nothing more than explain a system, Schmalisch’s dead-pan delivery reveals subtle humor, making intense studies of movement like wrapping a Mars Bar feel fascinating, concise, and utterly ridiculous. She also controls the cadence of the projector, its intermittent clicking flying through some slides while spending way too much time on others. It’s a clever way of forcing the viewer to focus on phrases or images he would normally disregard, rendering certain aspects of these studies as not only important, but foreboding, manipulative, and slightly terrifying. 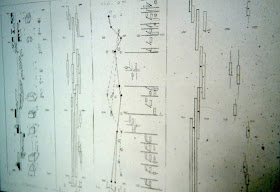 Another instance of slide projector usage occurs with Liz Magic Laser’s The Digital Face (2012). In the main part of the exhibition space, two projected images face each other on opposite walls. They are two dancers, Alan Good and Cori Kresge, silently reenacting the choreography of George H. W. Bush’s 1990 and Barack Obama’s 2012 State of the Union address, respectively. The slides present images of frozen movements punctuating various points of the speeches. Overall, the piece is a fairly hilarious and extremely intelligent isolation of the movement and texture of political rhetoric, and poignantly fits in the show. But the piece originally existed as a performance at MoMA PS1 and usually shows up in galleries as a dual-channel video, and so much of the humor, nuance, and impeccable movements of the dancers is thus lost in this iteration. While the use of outmoded technology transplanted the viewer to a correlating time period in Schmalisch’s work, it doesn’t make sense with Laser’s. It’s a curatorial attempt at cohesion that cuts The Digital Face off at the knees—a grave misstep. 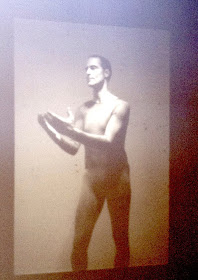 As previously stated, there are several pieces that quite purposefully lack immediacy, that demand extended attention, and Elke Marhofer and Mikhail Lylov’s Hongkong Turbulence (2013) is one of them. Although the running time is unstated, the looped video likely takes over half an hour to cycle through. The video initially reads as boring and self-indulgent observations of the transportation, shipping, and packing of commodities—a piece that is blanketly ungenerous to the viewer. But after about ten minutes or so (hang in there!), the work suddenly shifts from tedium to intense satisfaction. As it cyclically demonstrates machines and people binding, packing, smashing, crushing, compartmentalizing, selling, beeping, and deconstructing massive amounts of things, the work abstractly and formally, and almost ethnographically, reveals the innards of contemporary systems of efficiency. 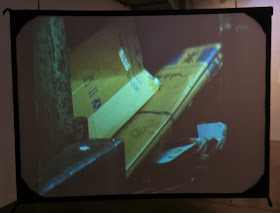 From Here to Afternoon makes interesting and borderline risky curatorial decisions that, while sometimes hurting the work, also enable it and create formal and conceptual relationships that would not likely exist if each piece were seen by itself. It also uses art to vocalize and think through overshadowed historical moments, and it’s usually presented the other way around in a standard contemporary context.

From Here to Afternoon runs until November 24, 2013, at the Glassell School.