No Particular Place to Go

For the last 11 months, the Art Guys (Michael Galbreth and Jack Massing) have been doing a series of events--performance pieces that often hearken back to their earlier work--to celebrate 30 years of artistic partnership. These performances often take something fairly ordinary and turn them into something seemingly absurd using time, repetition, etc. For example, the took a walk--the entire length of Little York, Houston's longest street. They shook hands with stranger in the downtown tunnels for eight hours. They got on stage and told jokes for eight hours. And this kind of thing recalls well known earlier performances, like when they sat in a Denny's restaurant for 24 hours straight.

Some of their earlier performances in this series were fairly private, even as they took place in public. I don't know how many people visited them as they walked down Little York. Patrick Bresnan photographed them, but I don't know if he was with them the whole time.

For Loop, their current performance (current in the sense that it is continuing until 5 pm tomorrow), they are driving around the 610 Loop for 24 hours. For 12 hours they are going clockwise, and then for 12 more hours, they will be going counterclockwise. They made this event a public spectacle as much as possible. They put the van they'd use for the trip on display at Memorial City Mall (the sponsor of the event) for a week prior. They have a phone number you can call to talk the Art Guys as they travel--832-712-6207. You can follow the event live (and comment) at http://www.facebook.com/theartguys or https://twitter.com/TheArtGuys. And perhaps the coolest thing is to follow their progress on Glympse: 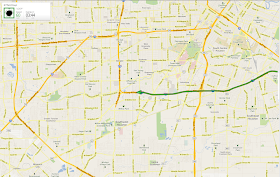 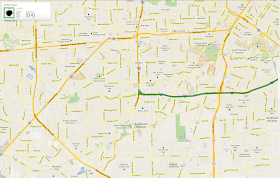 And they took people on rides. I met them around 7:30 pm at the Taco Cabana on the North Loop at Durham. The van they were riding had been painted by a professional sign painter and looked great.

They clearly were hoping that people might call them from their cars.

Their sponsor was prominently identified. 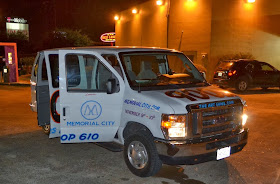 And there was a little bit of editorial comment--I'm not sure if this was an improvisation by the sign painter or the Art Guys instructed him to include it. 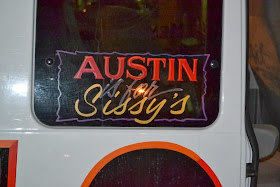 Inside they had a driver, a documentary filmmaker, Michael Galbreth, Jack Massing and for one circuit, me. 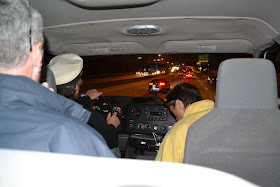 Michael's on the left, the driver is wearing a captain's hat, and Jack is in the yellow jacket. 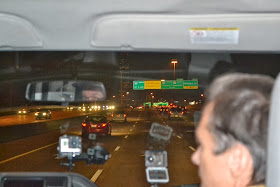 Michael spoke about how these events were about doing whatever they wanted, getting back to their roots. I mentioned how so many of them involved the geography of Houston and its economic, political and social structure, that they could be seen collectively as a portrait of the city. Michael also spoke of how even though they were in theory always turning right (for the first half of the performance), there were odd little doglegs in 610 when they would veer slightly to the left. He was becoming extremely familiar with the little things about the Loop that most people wouldn't notice, like the bizarre pedestrian bridge over the Loop at Gulfgate Mall.

Going around the Loop once has a point--you learn something about the city you're in. Going around it 18 times is an utterly pointless act. And as Hennessy Youngman says, that's how you know it's art.