Tales of the Unexpected: The Katy Contemporary Arts Museum 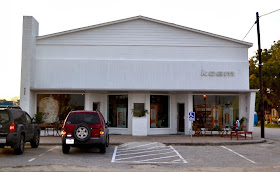 Visual art in Houston is an inside-the-Loop affair. This isn't just snobbery talking here. When you think in terms of art places--museums, galleries, public art, etc.--they are mostly inside the 610 Loop. The further out into the suburbs you go, the less art there is. Look at the map. Consequently, I think it's really important when a new art space opens up outside the Loop.

The west side of Houston has slowly been gathering steam in terms of art. HBU has their contemporary art gallery, currently showing a terrific Perry House exhibit. (Unfortunately, they seem unable to update their website.) WOAH in West Oaks Mall hasn't quite lived up to its potential, but now that it is home of the Katy Visual and Performing Arts Center, it may blossom. And as of two months ago, Katy has a contemporary art museum. The current exhibit has the unfortunate title of Primitive or Is It? Neither of the two abstract artists on display are in any way "primitive," which as a category of art should have been retired after Thomas McEvilley's 1984 evisceration of MOMA's 'Primitivism' in Twentieth Century Art: Affinity of the Tribal and the Modern. The art is by Dallas artist John Irazarry and Houston artist Ibsen Espada. I wasn't all that impressed with Irazarry's work, but I've long been a fan of Espada's paintings. 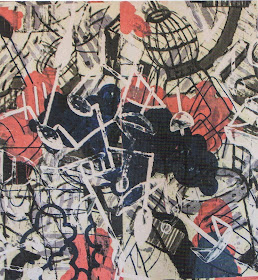 In addition to large paintings like Harpoon, the show included a lot of intriguing works on paper by Espada. Espada will speak with director Ana Villaronga-Roman at KCAM on December 5.

KCAM bought some of Espada's work for its permanent collection. You heard right--they're going to have a permanent collection. I asked where they would hang it and was told that the plan is to expand the facility for it in the future. It's ambitious, that's for sure. But for now they have a Kunsthalle-type space in an older lumber company's building, which seems just right for an art space.

This exhibit goes through January, and will be followed by a sculpture show and then by a photography show. KCAM also offers photography classes, which I think will help it engage with a community that probably doesn't know all that much about art, but is willing to learn.