Jeff Louviere and Vanessa Brown are photographers from New Orleans who exhibit their collaborative work under the name Louviere+Vanessa. Their work has a deliberately antique look. They ascribe the look of their photos to their city: "We live in New Orleans. Time here has no context, the whole city is like a photograph, frozen in an old moment but continually aging." One might also add that new Orleans is a city redolent with magic and the supernatural, which their art addresses. 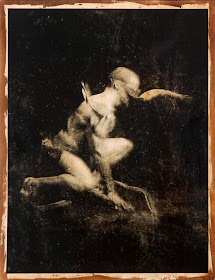 Dextrorsum depicts a man with a mask and rags, a savage Caliban-like creature. The image is blurred and damaged and yellowed so that it looks like a 19th century photograph.

In the 19th century, some photographers were obsessed with capturing on film what they eye could not see. Eadweard Muybridge is the best known now, primarily because he succeeded so well in his task. But there were also those who took "spirit photographs"--frauds who preyed on the desperate for the most part. Their photos were fakes, as are Louviere+Vanessa's. The difference is that Louviere+Vanessa aren't trying to fool anyone, any more than John Heartfield was with his photomontages. 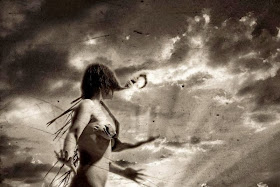 Both Dextrorsum and Custos Lux feature figures in masks. They reminded me of Josh Bernstein's double-eagle mask, and in fact Louviere+Vanessa's work on the whole reminds me of Bernstein's  Galveston project. They both link their work to a place with telluric supernatural forces. Bernstein's work seems deeper to me, in part because I know the history and mythology Bernstein has woven into this body of work. Louviere+Vanessa may have a similar mythology underlying their work. But without knowing it, what we end up with are beautifully-wrought, spooky images. 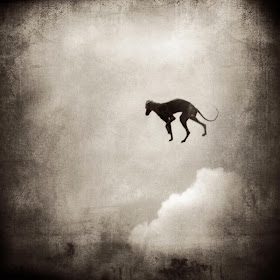 And that's enough. This was a perfect Halloween show and excellent artworks for the collector with a taste for goth. 945-Flying is a delightfully ghostly image.  But their work doesn't quite cross over into the uncanny. Looking at it is like watching the average horror movie or reading ghost stories. Such films and books may entertain, but they rarely transcend the genre-- House of Leaves

or Mulholland Drive are notable exceptions. And, among photographers, so are the Starn Twins or Joel-Peter Witkin. 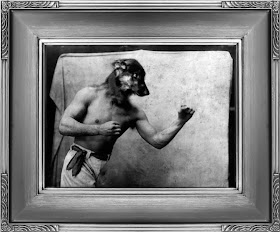 I wouldn't quite put Louviere+Vanessa in that class. Instead, they produce strange, witty images like  A Barking Dog Never Bites. Louviere+Vanessa create beautiful images, with is more than most photographers ever accomplish. 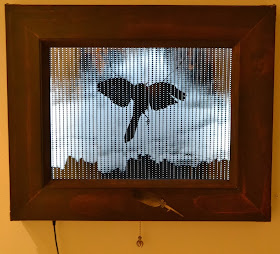 But with a few pieces in the show, they go further and create something uncanny. They call pieces like Still Life with Amnesia "cinegraphs". They are made by laying strips of super-8 film (an obsolete home-movie film stock) out in parallel strips. The image is exposed, and the work is displayed in a light box (super-8 film, like all movie film, is transparent). Why this seems uncanny to me is it's disruptive nature.

When we watch a film, we have certain expectations--that it will start and end and that there will be some moving images between the start and the end. For those of you old enough to have seen non-digital films, recall a time when the film got stuck. It starts to melt before your eyes. The film is literally split in two parts. And the bargain that film has made with you your whole life is broken. To me, the cinegraphs are breaking the bargain of film as well. It's a deliberate rupture (unlike the melting film, which is accidental). And that rupture is uncanny. 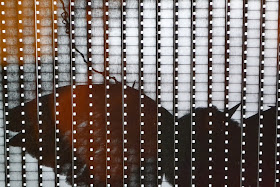 Louviere+Vanessa are on view dm allison art through November 16.