in 1980. In enumerating the term, he was in effect making an argument against the sole interpretation of photography as a set of linguistic, political, and societal codes. While a photograph naturally contains these codes, of course, Barthes argued that there is an additional kind of meaning inherently embedded in the work. It’s a meaning that defies terminology or code breaking—it is the kind of resonance that connects with the viewer on an intensely emotional level, thereby making the work indescribably unique.

Upon entering Inman’s first main gallery, it is tempting to immediately cock one’s head to the side and think, “what the hell is going on here?” Between the nude drawing, while attributed Corinne von Lebusa but questionably drawn by a young hormone-induced boy who snuck into a life drawing class and, horny and over-imaginative, just wanted to draw neon boobies, and the muddied squirrel-rabbit something or other by Jochen Plogsties, the work immediately feels trite, out of place, and even abject. Yet they command attention. How? Furthermore, how do we connect these five artists together (von Lebusa, Plogsties, Inga Kerber, Johannes Rochhausen, and Edgar Leciejewski) who seem to be making fairly disparate work? Additionally, does the sole fact they are exhibiting in a group show necessitate their connection? 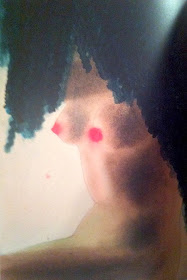 In titling the exhibition LOKALKOLORIT, which quite literally translates to “local color,” Inman intimates that we should. Other than their proximity to each other in sharing the same studio building and having gone to school together, and that Leipzig (where the artists reside) is our sister city, they all employ representational imagery and methods of banality and repetition that question modes of originality and authorship in art making.

These, however, are the kinds of postmodernist tropes that have been around in the art world for quite some time. And while this tongue in cheek sort of nihilism certainly pervades the work, there is also a notion of sincerity inherent in it that belies its postmodernist stereotypes—as if these artists genuinely want to cull meaning from our overly saturated, hyperbolically monitored world. And it is this kind of sincerity that not only connects the work, but also commands the viewers’ attention and displays the works’ punctum.

Naturally there are pieces in the show that communicate this more surprisingly emotively than others, and the series that most effectively achieves it are the series of floating head portraits John, Inga, Hans, Romy, and Dory (all 2013). Modestly scaled and oriented horizontally in a row, von Lebusa draws playful, lyrical faces that humorously feel like a cross between David Bowie and Glamour Shots. While Hans faces the viewer head on, the rest seem to be looking afar with entranced glances, their poses evocative of cheesy 80s portraiture, replete with fuzzy colors and backgrounds. However, this playful sensibility is sharply contrasted by sharp facial features and arresting, penetrating eyes. This contrast in conjunction with the repetition of faces demands sustained attention from the viewer, as if the faces are asking to be taken seriously in spite of themselves. This kind of unexpected seriousness is far more interesting than von Lebusa’s Portraits 1-12 (all 2012), which do not read as anything much more substantial than topical caricatures of women. And while that is probably the whole point, these portraits are simply less provocative than Hans and company. 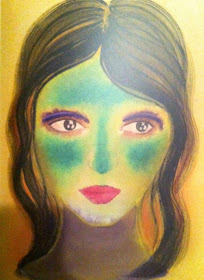 Speaking of banality, Johannes Rochhausen paints his studio. That’s it. While repeatedly painting one’s studio may sound like an act of obsession or even narcissism, according to the exhibition catalogue, he uses his studio as subject matter less as the content of the work and more as a control to work through various aspects of painting. Therefore, the work is less a conceptual statement on Rochhausen’s place of artistic production and more self-referential exploration on the act of painting. However, it’s arguably impossible when repeatedly painting the same representational subject matter to divorce the imagery from its content. And whether he intended for that separation or not seems inconsequential because it’s actually when Rochhausen’s treatment of the paint activates his studio as the content of the work that the most exciting things start to happen. This is most prominently represented in Untitled (study of room) (2013). While still representational, this barely illuminated corner of the room more so than the rest of his work leans toward abstraction. The dark browns and grays as well as the long vertical strokes of the corner walls lend the work an air of mystery and strange intimacy, creating a space that at once feels thoroughly lived in and foreboding. And it’s this kind of ambivalent treatment of a space that is far more engaging than Air Conditioning (2013) that, while beautifully rendered, conceptually and aesthetically flatlines. 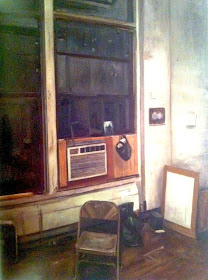 While these are only two examples, there does seem to be this common thread of a strange, unexpected punctum prevalent in much of the works of these five artists. While they all employ representational elements and engage with postmodernist tropes of authorship, repetition, and originality, there does seem to be an optimistic attitude of garnering meaning where there, upon original inspection, doesn’t appear to be any. While of course this sincerity works better in some works more than others, hopefully this is what defines Leipzig’s local color instead of nihilistic, played out postmodernist attitudes.

LOKALKOLORIT runs until January 3, 2014 at Inman Gallery.
Robert Boyd at 8:45 AM
Share