Report from the Golden Age of Art Comics: Kuš! 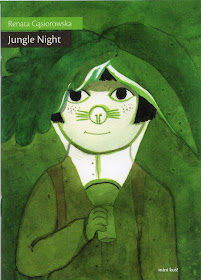 Latvia is a tiny Baltic state, intermittently independent but historically claimed by nearby states like Poland, Lithuania, Germany and Russia. It was an unwilling part of the Soviet Union until 1991. There are about two million Latvians. When you think of European culture (much less world culture), Latvia must be counted as on the fringe. Of the top of my head, I can't think of any prominent Latvian artists, writers or composers, living or dead.

But as someone who lives in Houston, I have no choice but to believe that culture can pop up anywhere at any time. (Otherwise I'd be forced to move.) The Latvian capital, Riga, is not large but it is old and has a cultural history. In the era of the internet, of Fedex and DSL, of jet travel and high-speed trains, no European country can be truly isolated.

So the fact that Kuš! Komiksi, an international comics publishing house, is headquartered in Riga is slightly surprising but also comforting. They publish cutting edge work by Latvian and international cartoonists. The work is published in English, which is both excellent (it means I can read it) and a little disturbing. One must conclude that they wouldn't be satisfied trying to reach the two million or so readers of Lettish. But English is a colonizing language. 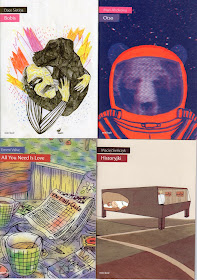 Mini Kuš! is a series of tiny comics (4" x 5 3/4" trim size), each given to a single artist. They're beautifully produced objects. They share a common design on the covers but otherwise are quite distinct. They art reproduced in beautifully reproduced in color. The artists are international--for example, Dace Sietiņa is from the Netherlands, Mari Ahokoivu is Finnish, Maciej Sieńczyk is a Polish artist and Emmi Valva is also from Finland. 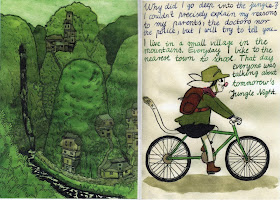 Renata Gąsiorowska, an artist from Poland, tells an updated animal fable in Jungle Night. In the protagonist's world, Jungle Night is a night when the adolescent animals spend the night in the jungle in order to return to their roots. Of course it's actually an excuse for partying. But somehow, our heroine has an urge to go deep into the jungle and really experience life as it was lived so long ago.

The art is beautiful, and one thing that distinguishes it from typical comics art is that the physicality of the paper is not denied. You can see from the pages above that Gąsiorowska allows the warping of the paper from her watercolors to become part of the art itself. 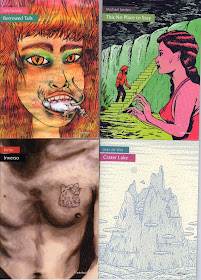 (Inés Estrada is a Mexican cartoonist. Michael Jordan is from Germany and has nothing to do with the basketball player. Berliac is an Argentinian artist currently living in Norway. Jean de Wet is from South Africa.) 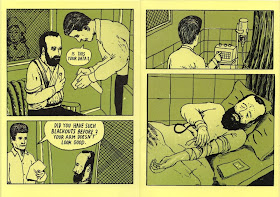 Michael Jordan's Mini Kuš!, This No Place to Stay [sic] is described as "semi-fictional, semi-autobiographical." It has the feeling of a dream, an anxious dream about being in a hospital and feeling vaguely threatened by the environment. The writing is interesting--it's English, but English as written by someone with imperfect knowledge. Typically, the English in the Mini Kuš!series is perfectly adequate. But in This No Place to Stay, the occasional error or awkward English adds to the feeling of alienation and dread experienced by the bearded protagonist, as does the bilious mostly-monochromatic color scheme. 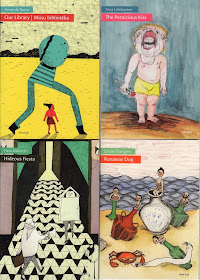 Most (but not all) of the artists in these 13 Mini Kuš! volumes are from the eastern side of Northern Europe, except for a few. Curiously, none are Latvians. (Some of the earlier volumes featured Latvian cartoonists, though.) What this tells me is that Kuš! Komiksi is a very unnationalistic operation. Furthermore, it suggests that the primary creative work is editorial, or to use a popular modern word, it's curatorial. They don't just publish--they host comics events and residencies. Kuš! is an art institution in addition to being a publisher. Given the diminishment of paper publishing in this electronic world, this may be a model for publishers of art comics in the future.

But it is still important to pay for these things. Heta Bilaletdin's Hideous Fiesta, for example, was supported in part by FILI, the Finnish Literature Exchange, an organization that promotes the translation and publication of Finnish literature abroad. Kuš! Komiksi get some support from the State Culture Capital Foundation of Latvia and other governmental organizations from Latvia, Finland and the EU. But they also earn money by selling the published works and they aren't above a little begging on their website. 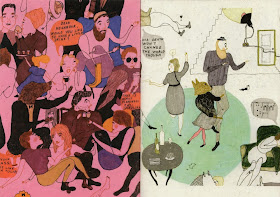 Hideous Fiesta depicts episodic scenes from a party, particularly as seen from the point of view of an older guest who has been invited and is shocked by the party-goers cynical view of the recent death of a politician. Bilaletdin depicts the party with a combination of drawing and collage, which seems just right for the subject matter.

So far Kuš! has published 15 volumes of their anthology š! and 21 volumes of Mini Kuš!. Some of the early volumes are sold out, but all the available ones can be easily purchased from Kuš! Komiksi's web store.