Return of the Asshole

Noted vandal Uriel Landeros (see this,  this, this, this and this)  returns with a new series of drawings he calls his "prison series." He posted them on his Facebook page. He describes them thus: "Its like telling a lion to stop being a lion, what dosent kill u makes u stronger. Short preview of my Prison series. The people of change, Patriots, Activist and other influential people." He includes portraits of Julian Assange, Edward Snowden, Carlos Slim, and Joaquin "El Chapo" Gúzman. Other drawings include a self-portrait behind bars, a masked tagger striking a heroic pose and a couple of "sheeple." Lord they're terrible. But the ballsiest picture is a portrait of Tony Shafrazi. 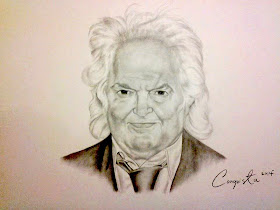 I've lightened the image from Landeros's dark Facebook image so it's a little easier to see. Shafrazi is a very successful gallery owner, but he is best remembered as the asshole who spray painted Guernica in 1974. (Obviously a role model for young Uriel.) Of course, I prefer to think of him as the asshole who assembled a contemporary art collection for the Shah of Iran shortly before the Iranian revolution. (There are many Shafrazi-esque assholes now, selling pricey art to various Gulf State despots as we speak.)

That the little asshole should pay homage to the big asshole seems only fitting, no?