On Choosing Not to Decipher

It's not interesting to me because "meaning" seems like the least valuable aspect of a work of art. The pay-off in drawing meaning out of an inscrutable artwork is almost always less than the cost of the effort put into the deciphering. If the meaning is right there on the surface, then I'll take it into account; otherwise, it's not worth the trouble. Because art has other qualities that--for me, at least--count a lot more. Artworks have presence. They may even have beauty. They have personal associations that are unrelated to whatever meaning the artist assigned to the work. All of which is far more important to me as a viewer than what an artist "meant."

But from the point of view of an artist like Kyle Earl McAvoy or Betsy Huete (who has written many posts for The Great God Pan Is Dead) there must be an awareness that their art may strike some viewers as difficult. Perhaps they realize that aspects of their art which presumably have personal meanings for each artist may not have that meaning at all for someone else. 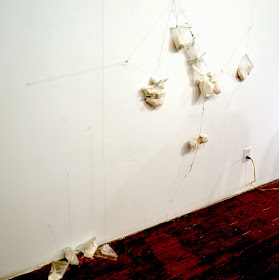 For example, the use of diatomaceous earth in The Folly in Architecture by Betsy Huete. This white powdery substance is made of the fossilized shells of diatoms and has various industrial and agricultural uses. So if an artist uses a very specific "non-art" material like diatomaceous earth, she may be interested in some specific use of the material (as an absorbent substance for controlling spills of toxic liquids, for example), or in its nature as the fossilized remains of beautiful unicellular organisms, or because of its formal qualities (for example, its color or tactile qualities) or for some combination of unknowable reasons. Or she may be using it as a bricoleur, because it was handy. Maybe Huete just happens to have a lot of diatomaceous earth around.

But as a viewer, all I have if what is in front of my eyes filtered through my own experiences, thought processes, biases, desires, etc. And when I looked at  The Folly in Architecture, I mostly thought, "Bags of white stuff. huh."

Huete could have added a card with some information to help us interpret  The Folly in Architecture, much as has been done in the current show of art by Robert Hodge at the CAMH. I'm so glad she didn't. Such texts, while sometimes necessary, are graceless additions to a work of art. They never make the art better, just--at best--more comprehensible. 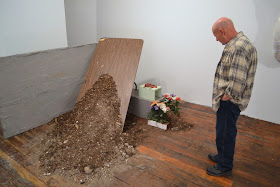 Huete's Harbor feels like a work of bricolage, except maybe for the model trees and cacti. It's an example of the time-worn genre of combining crap with crap. No aspect of it is elegant, not element of it seems new or particularly beautiful. The fact that it includes a steak that is undoubtedly starting to rot before our eyes just reminds you that Harbour may be many things, but pretty ain't one of them. 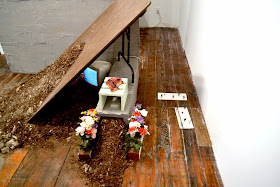 What appeals to me--and perhaps only to me because it reminds me of a personal failing I have--is the tentative, unfinished quality. It's like she thought about making dinner but didn't get around to cooking the steak. She thought about doing a little gardening but only got as far as dumping some dirt out. Maybe making a model railroad would be a good project, but she only got as far as setting up the HO scale trees and cacti. Even relaxing in front of the tube was apparently interrupted, because now all we're picking up is snow. (The problem lies in this new antenna. If this damn set's broken, go to Allied TV Rental.) 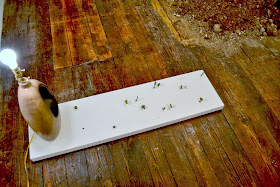 What does it all mean? The installation is begging you to ask that question. But I prefer to experience it as a strange presence, as if a bizarre interior decorator has installed a conversation nook in the back of galleryHOMELAND. The elements have no obvious relationship with one another beyond that we give them. And beauty? Well, why not--it's just "as beautiful as the chance encounter of a sewing machine and an umbrella on an operating table." 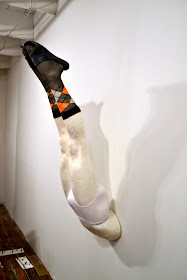 By contrast, Kyle Earl McAvoy goes for more crowd-pleasing effects. Deciphering really isn't the issue with  👍 [sic, I guess]. Undies and a pair of muscular thighs are sure to get a thumbs up from about half the population. The individual elements of 👍, socks, sandals, undies and store-display half-dummy are all found objects (at least I assume the dummy is a found object), but they're all found objects that were designed to look good. Therefore it's not a surprise then that the combination of these objects looks good. 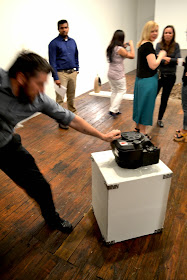 A lawn-mower engine, on the other hand, might be beautiful in the eyes of some, but it wasn't designed to look good. But McAvoy appeals to viewers in a different way here--with spectacle. The motor is bolted to the white pedestal, which is itself reinforced with angle brackets. Why? Because when you pull the rip cord and start the motor up, the whole thing bucks and jumps. 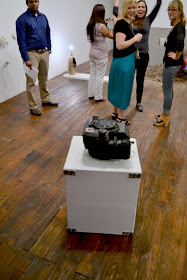 It's a crowd-pleasing effect (as can be seen by the cheering Betsy Huete in the background above). There is an off-switch (which, if it is similar to other mower engines I've used, shorts the spark-plug to kill the engine) which the bucking of the pedestal eventually triggers. It's not quite a Jean Tinguely, but it does provide a few moments of pleasurable noise and movement (not to mention a lot of exhaust--on the opening night, galleryHOMELAND director Paul Middendorf had to open the gallery's bay door to keep the exhaust from overcoming the viewers).

With Solicit, "deciphering" feels utterly beside the point. That's my advice for this exhibit (and really, for most art). It's an old idea and I'll defer to Susan Sontag (circa 1966). She said deciphering (or "interpretation," as she called it) was "the intellect's revenge on art.

" It's a wall between the viewer and experiencing the art. This viewer, at least.

I'll Imply, You Decipher runs through December 3 at galleryHOMELAND.