Just after midnight on October 23, HJ Bott contacted me to say he would very much appreciate my comments on Scribble Morphings, his current exhibition at Anya Tish Gallery. I was not the proper person to write about his exhibition, I told Bott, because it doesn’t please me to write criticism. I did want to ask him a few interview questions, I said, in hopes of learning something about his art and life that’s different from the same old shit that’s been written in the past. Over the course of several visits we discussed the following: 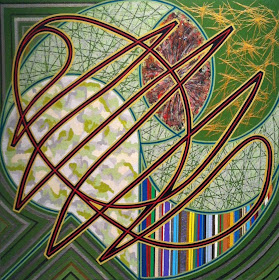 Virginia Billeaud Anderson: In our correspondence, and even on your website, you occasionally allude to your mortality. It’s all about to “dissipate,” you told me recently. Because of age (b. 1933), do you make art feeling urgency about time running out?

HJ Bott: GAWD! You are so observant/perceptive. Yes, time has always been my albatross, wanting to be ever more prolific. Might mention I was a preemie that accounts for my pulmonary issues and the familial tremor that came on strong about 1990. Because of these physical restraints I have had to shift techniques to compensate, which every artist experiences. Both maternal and paternal genes are long lived; but in fact I am tired, and was forced to give up sculpture. Mortality is indeed interrupting artistic plans, and I know I'll never get to all the ideas I wish to execute concerning the Phenomena-of-a-Line using the DoV, the 24 Basic Scribbles and the new findings about pre-historic Egyptian cultures.

Also, I’ve had a few of the usual artist setbacks with work, studio and gallery losses, and some heavy depression cliffs, family sadness, and I lost my daughter to suicide, about the time my shakey ole tremors were mis-diagnosed as Parkinson’s.

Yet I’ve had a robust life, having been an Airborne Ranger who performed Counter-Intelligence shit in the mid-1950s, and other physically vigorous stuff like drag strip racing, I married three times, although this one has been 44 years, what luck. I joined the Army to piss off my parents for not allowing me to take my car from San Antonio to L.A. for my second year of school. Smart stuff, huh?

VBA: You know Harvey, one morning you turned my head. I sat near you at the weekly artists’ breakfast, and you were wearing your Stones’ lips and tongue T-shirt and the ponytail, and it brought up dreamy recollections of the early seventies when I was young and attractive and ignorant. Even with the wrinkles and talk about a knee replacement, you were hot. I’m not trying to flirt with you Harvey, I’m just saying you made my day.

HJB: Just as your steel-trap intellectual remarks have on occasion made mine, which I’ve written to tell you. 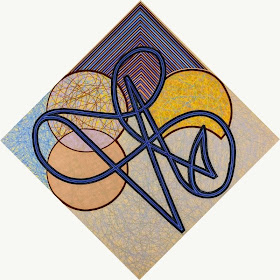 VBA: On the evening of your Scribble Morphings exhibition opening, Anya Tish told me she was tempted to install the triangular pieces as rectangles, until she read a note on the back of one that suggested a collector have the courage to hang them triangularly. Why are the pointed sides important to you?

HJB: One of my favorite antecedents, Max Bill, used the diamond format to maximize space and avoid the constraints of the rectangle and the square imposed by the usual stretcher frame format. It appeals to me to avoid cookie-cutter impositions and constraints to aspects of our existence, as expressed by Edward T. Hall in his book Hidden Dimension.

Back to Max Bill, I see the format as a visual drift-off whereas rectangular/squares are constraining.

VBA: It’s interesting you brought up constraints. I recall Robert Boyd’s 2012 observation that it is precisely a self-imposed restraint, your “Displacement-of-Volume” process of mathematically devising linear patterns, which catapults your creativity. In your hands, the programmatic approach succeeds, because even if a viewer is unaware that such a painting as Mobius Quatro, which references the math-based Mobius Strip, derives from mathematical theories, he is knocked over by the beauty of an uncompromising artwork that seems to pulsate. 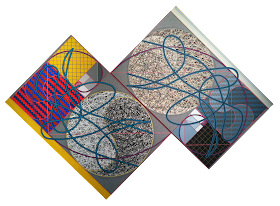 HJB: I had an unusually high aptitude in math and geometry, and in the 1950’s I actually turned down a math scholarship to Rice because the art department sucked. My parents loved this. Math originates all. The painting Systems A-GO-GO was directly inspired by π (pi the mathematical constant 3.14159…). You see I’m working here with the relationship of the planet’s dimensions relative to the Great Pyramid, the perimeter of which is analogous to the equator’s circumference. Also the pyramid is nearly at the center of the Earth’s landmass and was probably exactly at the center when constructed, until tectonic plates caused landmass shifts. The significance of these measurements to my DoV System is paramount, relative to the left/right and top/bottom axis, as well as the inclination (almost 52º) of the pyramid. And scribble morphings, based on the basic markings that are universal to all cultures, overlay the DoV. Do you need me to explain more about the planet’s dimensions and all this other stuff I’ve been sputtering?

VBA: Give me an example of new findings about ancient Egyptian culture that you would like to incorporate into your art if you have the time.

HJB: The newest findings, as I understand them, are hieroglyphics showing cables along with copper electrodes that denote a power source for the pyramids, since there has never been evidence of the pyramids actually being tombs. This interests me enormously because my DoV and resulting art works have to do with OBJECT measurements, even though measurements themselves are but means to create an object. Does this make sense? There is so much more to explore, with time running out, and then I would make comparisons with the Mayan culture.

VBA: I can imagine your loyal collectors losing their composure over the complex narratives beneath the paintings. 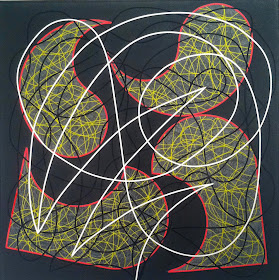 HJ Bott, OH-GEE, 2014, glazed acrylics on canvas, 24 24 inches
﻿
HJB: Every work has a background story, as Bill Arning observed when he read my 2012 monograph Rhythm and Rhetoric. My best friend Earl Staley who is currently showing at Zoya Tommy Gallery works in a similar manner, Earl and I are both narrative oriented. Another narrative-driven work, the painting OH-GEE has the subtitle "Ordovician Graptolites" on the back to express invertebrate Plankton-like fossils from the Paleozoic Era about 500 million years ago. Don’t you find its yin/yang-shaped “commas” jazzy? We can trace such basic scribbles back to initial inhabitants of the Olduvai Gorge.

VBA: At the time of your 2012 Anya Tish gallery exhibition you connected your use of line, the most basic of design elements, to string theory by naming a painting after the string theory physicist Joe Polchinski. I actually retained the note you wrote to thank me for commenting that it was intuitively comfortable to imagine subatomic particles to be swishy like strings. Do the new works conjure particle physics?

HJB: OMG! That 2012 gallery show celebrated 40 years of DoV. Physics enters the new works through my reading of Edwin A. Abbott’s Flatland,

the classic on perception which I give all my Perspective Drawing students, Cosmos

by Carl Sagan, Michio Kaku’s Parallel Worlds: A Journey Through Creation, Higher Dimensions, and the Future of the Cosmos,

as well as Brian Greene’s The Fabric of the Cosmos.

The painting Systems A-GO-GO is based on Mario Livio’s The Golden Ratio.

Forgive me for listing books like a pretentious ass but a Houston Press writer used innuendo to snicker at my naming my painting after Joseph Polchinski, the big daddy of string theory. She obviously failed to grasp the extent to which this scientific material penetrates the DoV, Phenomena-of-a-Line, and Basic Scribbles components of my art. 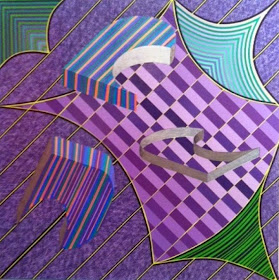 VBA: Looking at an ungodly long career, the innovations and inventions, gallery and museum exhibitions, awards and honors, do you consider yourself a success?

HJB: Virginia, the question of success is tough to answer because the word’s meaning varies as a noun (attainment,) adjective (prosperity,) and verb (which denotes continuing.) Even though my achievements have been extremely satisfying in the range and time of what has passed, the art world might not consider them particularly blue-chip. I created abundant products, objects, and concepts, and studied and researched a vast variety of materials and techniques, which has been exhilarating, especially after the cluster-fuck of shifting subjects and approaches that took place prior to my development of DoV. As a student of sculpture, painting, anthropology and social psychology, I achieved being an artist FIRST; and second, an independent, non-academic, broad ranging anthropologist. Throughout my art career there has been so many marginally profitable achievements that I look back on as triumphs, the series of ROBOTTs™, and deep-space-light installations, my European studies and exhibitions, development of the plastic TOBINITE™ for modeling, are only a few. And I married my soul mate, Margaret Deats (Dee Dee) Bott, who convinced me to become a full time artist at age 42 which gave me the luxury to research, read and experiment. I consider that success, even without prosperity.

Would I like to be in more public collections? Of course, but while some public collections are good for the resume and the ego, their audiences can be limited to registrars and curators. Do I want more exhibitions? If they are in museums and prominent galleries like Anya Tish, but then one must tolerate critics and dissatisfied viewers. But it’s worth it, I want to do more, there's still time, I'm only 81. 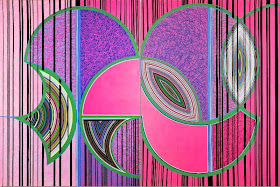