So I was in New York a couple of weeks ago at Comic Arts Brooklyn, a small festival devoted to art comics. I bought a lot of comics there, among them comics I'd class as minicomics. Minicomics used to be a pretty specific term--it referred to comics produced by folding a sheet of 8 1/2" x 11" paper twice until it was 4 1/4" x 5 1/2". You would trim and staple it and then you had a tiny 8-page pamphlet. So it was a very cheap format for someone to publish their own quickie 8-page comics on a xerox machine.

Of course, artists being artists, this was just the starting point. They played with formats, they added silkscreen covers on cardstock, they published each others' work (moving it from the realm of self-published to small press), they used different printing technologies such as print-on-demand, offset litho, risograph, etc. And, of course, they overlapped with the world of 'zines, so the content wasn't always strictly comics.

Given these caveats, here are a few modern minis. 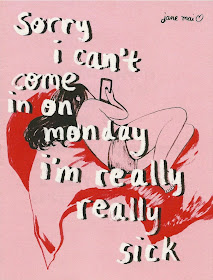 Sorry I can't come in on monday i'm really sick (2014) by Jane Mai. This mini was published by an established publisher of high-quality comics, Koyama Press. It seems to consist of diary excerpts from the girl on the cover, along with drawings of her sitting around in her panties depressed. Some of the thoughts are suicidal and self-deprecating. Some are funny, though: "i'll show you mine if you show me yours but also if you give me $1000 and also no". It's the bored thoughts of one person on a somewhat bad day. It works perfectly as a minicomic--you wouldn't want it extended much longer than it is, but for what it is, it feels truthful and revealing. 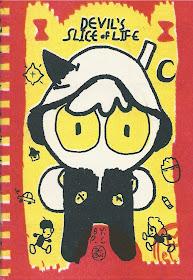 Devil's Slice of Life (2014) by Patrick Crotty. We follow a little devil, Barbatos, as he spends his day playing pranks on humans. This may remind you of many of the activities of the devil in the great Peter Cooke/Dudley Moore movie Bedazzled.

In Bedazzled, Peter Cook's Satan character was pranking people to provoke anger, one of the seven deadly sins. In Devil's Slice of Life, Barbatos gets paid for his work. I'd describe it as a cute-brut-style comic--Barbatos (and his victims and fellow devils) are drawn in a deliberately rough style, but it maintains a kind of manga-influenced cuteness. Devil's Slice of Life was printed in three colors on a risograph, which is a popular printing platform for small-press and self-published comics. Crotty is a member of a Dutch artists' studio called Peow Studio. CAB is surprisingly international, which is wonderful. 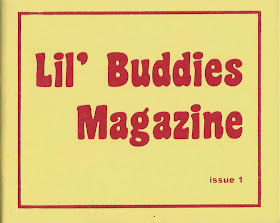 Lil' Buddies Magazine, issue 1 by Edie Fake. This is a bit of a cheat, because it's not a comic and I didn't get it at CAB. This was by the cash register at Printed Matter, the venerable New York bookstore devoted to artists books, art books, art zines, self-published stuff, etc. Edie Fake is a Chicago cartoonist/performer, but Lil' [sic] Buddies is about found cartoon art--specifically quasi-vernacular anthropomorphized images used in advertising. The examples he and his correspondents have found are excellent.

These two are not even close to the most insane anthropomorphic cartoon things in Lil' Buddies. 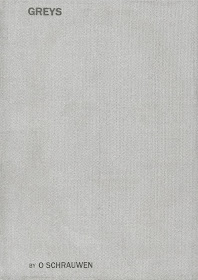 Greys by Olivier Schrauwen (2012). I've reviewed Belgian cartoonist Olivier Schrauwen's work before, so I expected to like this, which I did. The narrative here is much more foregrounded than in his other work that I've seen, but there is a degree of distancing and irony that flickers in and out, making you question what you are reading. Of course I see it as fiction (Schrauwen is relating an alien abduction experience), but the deadpan way of telling the story begs the question of whether Schrauwen is trying to create a convincing tale or if he is playing with the form of abduction stories for ironic purposes? And does it matter? 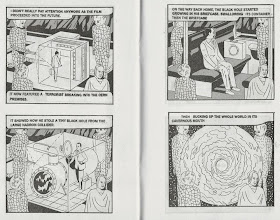 The spread above depicts the future of humanity as depicted by the aliens. Greys was published by Desert Island Comics, the great Brooklyn art comics store. Check it out the next time you're in Williamsburg. 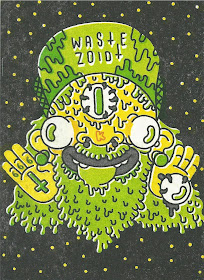 Wastezoid by David Waterhouse. The loser stoner genre has always seemed very American to me, but the brilliant work of Simon Hanselmann proves that it's an international genre. David Waterhouse, from Brighton, England offers up an amusing English take. Especially fun is "Thorven, Invisible Black Metal Bestfriend," in which an unnamed wastezoid takes relationship advice from an imaginary friend spouting phrases like "Resuscitate my dying breeze into the dreams of tangled living corpses behind sigils made of flesh and trees!!" The drawing is rubbery and fun. It appears to be published by Rad Party. 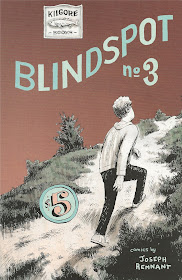 Blindspot no. 3 by Joseph Remnant (2013). This is another comic published by a comic shop--in this case, Kilgore Books in Denver, Colorado. All the stories here are autobiographical (I think), and Joseph portrays himself as a dyspeptic, depressive individual. The comics are well done, and I can take this kind of story in small doses (33 pages is just about right). The stories are solipsistic--mostly Remnant and his thoughts and reactions to the world. Indeed, the one story where he interacts with friends, "Elevator", turns out to be a dream! But the drawing is beautiful, and Remnant constructs his stories well. I found myself enjoying them a lot despite the somewhat grim and depressing subject matter. 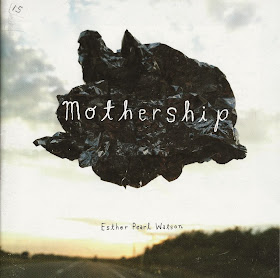 Mothership (2014)  and The In Between (2012, I think) by Esther Pearl Watson. Esther Pearl Watson is an artist who deserves a lot more consideration than a drive-by review of some minicomics. Watson is a painter, a cartoonist and an illustrator. But these two works don't slot easily into any of these categories not least because they are both heavily photographic. Mothership seems to conflate mothers (in general) with flying saucers (apparently, flying saucers have an important part in Watson's personal history, but not how you would think). She collages (I think) fuzzy photos of objects that could be UFOs over fairly generic landscapes, while describing the "soaring sisterhood" of the motherships. 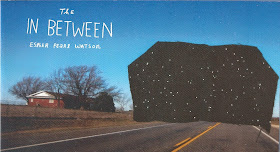 The In Between mixes more straight-forward comics narrative with photos. The "in betweens" are places and situations--for her, it's art school (she went back to school to get a MFA at CalArts in 2010), and for her grandfather, it's  a "healthcare facility". I read this in between place as between his life and his death, but I may have been jumping to an overly bleak conclusion. 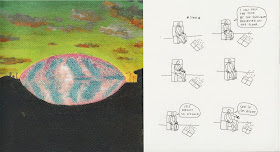 Combining paintings, comics and photos, this small color zine seems like a "mini-Gesamtkunstwerk," if such a thing could exist. Art school is on her mind--she compares her grandfather's constrained existence to minimal artwork and artwork dealing with nothingness, blankness and the void. But for herself, the opposite seems true. She is inspired by Robert Rauschenberg's "combines," which really were Gesamtkunstwerks. 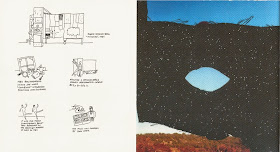 You come to realize as you read it that a lot of the paintings and photos you have been seeing are parts of Watson's own combine. 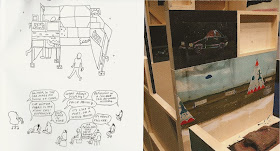 Has she continued to make large scale installations? Or was that just an art school detour, a product of being in an in between place? Both Mothership and The In Between are examples of minicomics that are really on the edge of the category, which has never been well-defined anyway. Their existence makes me feel that the form has continued vitality. She sells them on a site called Funchicken.