Robert Boyd
I dreamed that Mark Flood had made two animated automata, one a homunculus (specifically one identical to Tejadora by Liliana Porter) and one life size. For some reason, I had to pack them both up in a box. Fortunately, the lifesize automaton was made of papier mache, so was really light. (The rest of the dream had to do with studying a really hard kind of math for a college class and taking a funicular railroad to the top of the cliffs of Galveston.) 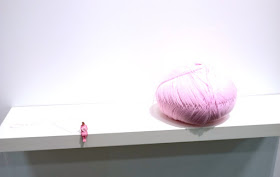 I just watched a movie called The Family Fang, directed by Jason Bateman adopted from a novel by Kevin Wilson, about a pair of adult children whose performance artist parents used them in their cruel performances. It's not bad but not great.

While I was watching it, I couldn't but help think of Hillerbrand+Magsamen, the Houston husband and wife artistic duo who use their own children in their work. Their use of their kids as performers in photos and videos is not cruel, but I've often wondered if as the kids grew into teenagers if they would come to resent it or be embarrassed by it. For example, in the piece below, their son stands in his underwear and breaks plates. I can imagine that at a certain age, that will be an embarrassing artifact for him! In The Family Fang, what the parents did is devastating to their adult children. In the case of Hillerbrand+Magsamen, it may be slightly embarrassing as the children age. But it doesn't seem like the kind of thing that would permanently damage them.

Family Portrait from Hillerbrand+Magsamen on Vimeo.
So I went to Frieze and NADA in New York last week. NADA is the New Art Dealers Alliance and they hold a couple of art fairs every year. Printed Matter was set up at NADA, so I bought a couple of things there: 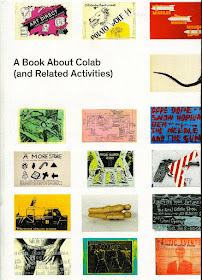 A Book About Colab (and Related Activities) edited by Max Schumann 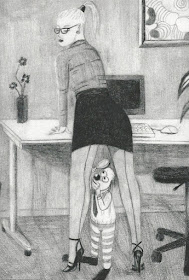 Bizness is Bizness by Kikifruit

A Book About Colab (and Related Activities) is about the artists' collaborative Colab that was started in New York in the 70s and is responsible for some important institutions (ABC No Rio) and exhibits (The Real Estate Show and the Times Square Show). It's less of a history than a collage of images and texts in more-or-less chronological order.

The second item is Bizness is Bizness by Kikifruit, a zine composed of full-bleed drawings of clowns and sexy blondes. I got it because I liked the deliberately crude drawing and found the drawings funny. 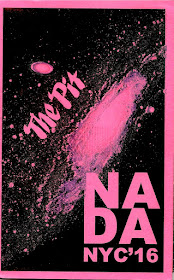 The Pit is a Los Angeles gallery that was displaying work at NADA. The artist whose work I liked best at the Pit was a guy named Andrew Sexton who made these furniture-like sculptures. 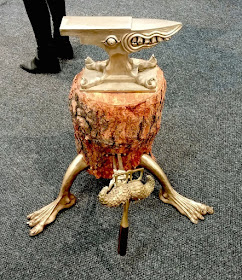 The Pit made a zine that they gave away at NADA.

The Lamb is a London art gallery and they were showing art by a Peruvian artist named Fernando Otero. His art intrigued me because it was installation based and incorporated old-fashioned stadia rods, which were tools used by surveyors.

Fernando Otero installation at the Lamb booth at NADA

The people at the Lamb gave me a Spanish-language catalog from an exhibit by Otero, Ya Nada Volverá a Ser Igual. 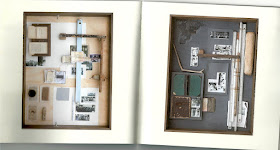 Fernando Otero, spread from Ya Nada Volverá a Ser Igual

Packet is biweekly art magazine from Brooklyn that is designed to look like a syllabus given out to students at the beginning of a semester. Every six issues, they are collected into a big packet (similar to course packets of readings for a college class). I got the Packet collecting issues 74 to 79. 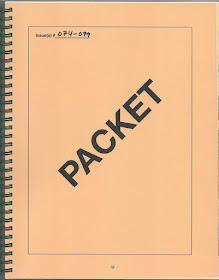 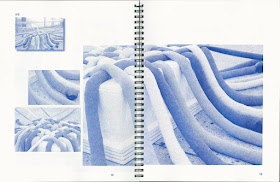