I've known Matt Madden and Bob Fingerman for many years. An issue I often have is how do you write about people with whom you have a personal relationship. That's become an issue writing art reviews in Houston. I've come to be friends with many Houston artists, for example, which over time became a problem for this blog. I picked up two recent comics by Madden and Fingerman that I want to talk about, but I wanted to warn readers that I've known these guys a long time. Hell, I've stayed in Fingerman's apartment with him and his wife! I attended Matt Madden's wedding! I am totally biased. So keep that in mind. 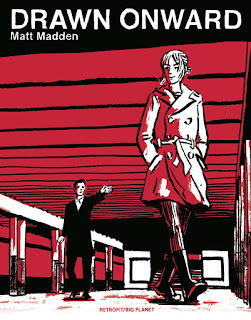 Matt Madden has been making comics since the early 1990s (the first Madden comic I ever saw was Terrifying Steamboat Stories, which was published when he was an undergrad at UT in the early 90s). I've been following his career pretty closely since then.

Madden has always been a formal experimenter, and a few years ago joined a group of French comics experimenters who call themselves OuBaPo (which stands for ouvroir de bande dessinée potentielle, which roughly translates as the "workshop for potential comics"). Literary-minded readers might recognize OuBaPo as a spin-off of OuLiPo, in which a bunch of writers used specific formulas to write novels and poetry. Raymond Queneau founded OuLiPo in 1960, and the group included such writers and Georges Perec and Italo Calvino. They would come up with arbitrary, slightly absurd rules for writing. For example, Perec wrote a great novel without the letter "e", La Disparition (A Void, in English). Think of the complex poetic rules that used to be de rigueur--the number of syllables in each line, the arrangement of stresses, the rhyme scheme, etc.

OuBaPo cartoonists do the same thing. Some of the exercises they do include "larding" (taking an already existing comic and adding extra panels between the existing panels), "reduction" (taking a longer comic and summarizing in a few panels), and "reversibility" (making a comic that can be read forward and backward). The goal is to use these constraints as a creative boost; essentially, they don't believe that absolute freedom is all that good a way to come up with original ideas. (Perec wrote, "I set myself rules in order to be totally free.")

The most famous example of reversibility is The Upside Downs

by Gustave Verbeek, which appeared in newspapers from 1903 to 1905, nearly a hundred years before the creation of OuBaPo. (OuLiPo refers to such examples OuLiPo-like texts avant le lettre as "premature plagiarists".) 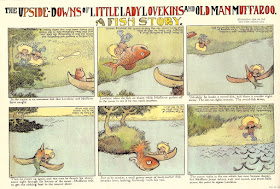 Then you turn the page upside down and read the rest of the story. 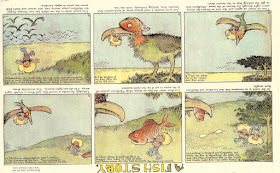 Drawn Onward is a example of reversibility. Not only can it be read backwards and forwards, it is necessary to read it both directions to get the whole story. Formally, it's an amazing feat. But the same could be said about The Upside Downs, which had pretty dumb stories. You as a reader never care about its two ongoing characters, Little Lady Lovekins or Old Man Muffaroo, which is not the case with great contemporary comics strips from the early 20th century (see for example the great characters in The Katzenjammer Kids or Little Nemo in Slumberland.) This is the fundamental difference between an Oulipo novel and the world's longest palindrome. The Oulipo writers tried to make literature worth reading. And Matt Madden, as a OuBaPo artist, is trying the to do the same.

When I first read Drawn Onward, I didn't realize that it was a reversible story. It wasn't until I got to the end of the comic did I realize that it had to be reread backwards. Unlike The Upside Downs, you don't turn Drawn Onward upside down--you just read the panels in reverse order.

It starts with the sentence "This comic is a double suicide note..." The first three panels depict the studio of a female comics artist, drawn in a light style with very little chiaroscuro. It's almost clear line, but not as perfect as we expect from clear line. There is a human quality to the drawing; the panel borders for example are hand drawn--no ruler was used. But when we turn the page, we see what has been drawn by the comics artist--a flashback. The style is completely different. The line-drawing is done in these flashback segments with a heavy brush, with lots of solid black and occasional drybrush touches. The protagonist encounters a young man who appears distraught and says something cryptic to her. He acts like he knows her, but she has evidently never seen him before.

As the comic progresses, she sees him again several times. She perceives him as a stalker of some sort, but starts to grow amused by him. She writes in the narration of the comic, "My god, was I developing a crush on my stalker?" Once she finally expresses her feelings (in the center spread of the comic, in which she kisses him), though, he starts to grow colder and becomes sarcastic towards her. She sees him in the subway several times after that, but he avoids her.

In the last page, she instructs the reader to read the story backwards: "The beginning of my story was the end of his." 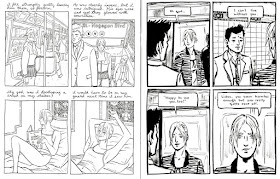 Drawn Onward fulfills what I think of as the requirements of OuBaPo (or OuLiPo)--to be formally interesting (based on the constraint underlying the form) as well as interesting as a work of comics storytelling. As you read this, you are interested in the young woman cartoonist and her mysterious crush. One fault it has it that it has to tell you to read it in reverse, and as part of the story that is a bit awkward. But given the way we ordinarily read comics, I don't know how else one would do it. 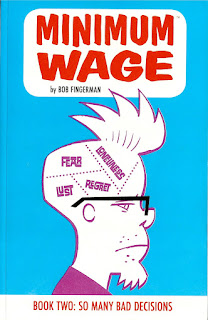 (1994), a take-off on the Freaky Friday body-switching genre, except instead of a mom and teen-aged daughter switching, it was a 50+ year old black man switching with a bratty suburban white teen-aged girl. It was pretty funny, but the art was even more stiff than Skinheads (it was almost completely photo-referenced).

Fingerman decided around this time that he needed to loosen up his art. He started his comic series Minimum Wage (1995-1999), a roman à clef about the engagement and wedding of his alter-ego Rob Hoffman to Sylvia Fanucci. A lot of that book (collected in one volume, Maximum Minimum Wage

) dealt with life as a barely-scraping-by 20-something freelance artist in New York City. I would say that aspect of the story was for me the most interesting thing about Minimum Wage, but I loved the whole story. By this time, I had gotten to know Bob personally pretty well, and he included me and some of my co-workers in the background of one panel. Because it was a lightly disguised roman à clef, part of the pleasure in reading it for me was to try to figure out who all the people in the story were in "real life"--a lot of them were from the world of comics, so I knew a bunch of them.

Anyway, that was the work that really demonstrated that Fingerman was an important comics artist, in my mind. His drawing style didn't really loosen up all that much (Fingerman just cares too much to just let go), but the cartoony drawing (as opposed to photo-realistic style of White Like She) was an appealing direction. And it pretty much set the course for Fingerman's subsequent comics. For example, in his post-apocalyptic comedy, From the Ashes, he drew the whole thing in pencil, which I have always taken as a deliberate attempt to loosen up his drawing by changing techniques.

After the 2013 publication of Maximum Minimum Wage, Fingerman decided to revisit the characters from Minimum Wage in a new Minimum Wage series. He starts the new series almost instantly after immediately after Rob has broken up with Sylvia. The series is all about Rob getting back out on the market for love. The first volume of the new series, Minimum Wage book 1: Focus on the Strange

, has Rob briefly dating a 30-something hippie lady, a 50-something former TV actress and a woman who edits a gay porn magazine. (I assume these are fictional analogs to real people--I'm totally wondering about the identity of the former TV actress.) None of these assignations seem too disastrous, but they don't lead anywhere for Rob. Rob is 25 years old and a very eligible bachelor. He has a new well-paying comics gig drawing PRIX (sort of the analog in the Minimum Wage world of Teenage Mutant Ninja Turtles, whose comics Fingerman drew for about a year 1993. In Minimum Wage, instead of being turtles, they are horseshoe crabs.) He's kind of uptight about some things, but he is good boyfriend material. Of course, that could be self-congratulation on the part of Fingerman, of whom Rob is a quasi-autobiographical counterpart.

Book two leans more on disastrous dates. Rob meets a goth woman via a dating site who turns out to be horrible on many levels. The unrelenting horror of their brief relationship is the source of any of the books' funniest moments. But worse, he hooks up with his ex-wife. He needs some way to process what's been happening to him. So Rob starts drawing autobiographical comics just to amuse himself. He gets encouragement from professional colleagues to continue on that path.  It's weird. In a sense we get Fingerman drawing Rob drawing an early iteration of Minimum Wage.

The art has a really loose feeling that I've never seen from Fingerman. The character designs are more-or-less the same as in the original Minimum Wage, but everything is more exaggerated and the ink is slung on the page more expressively than ever before. It may be his best artwork ever, although I loved the pencil art on From the Ashes as well. It is colored rather simply in a duotone (black and white and light blue, similar to the way Dan Clowes colored Ghost World) but with occasional full-color pages. The fill-color sequences tend to be dream sequences, which aside from an opportunity to show off some very nice drawing and painting, don't add much. I know they are meant to give a glimpse into Rob's inner life, but this comes out well in the plot and dialogue, which makes the dreams feel redundant. 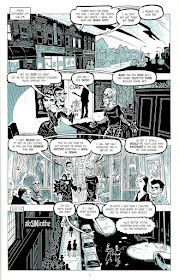 Aside from the dream sequences, I loved everything about this comic. And the dream sequences aren't bad, just unnecessary. But one problem with Minimum Wage book two is that there is too much filler. After 124 pages of comics story, there is a 36-page "bonus section" of covers, sketches and pinups. The pinups are by various guest artists, so you get to see some art by Rick Altergott, Collen Doran, Jason Little, Stan Manoukian, Troy Nixey and many others. But while I like some of the drawings, I don't think they add much to the book.

I'm not sure if the story is over with this volume. It does end with Rob decisively calling it off with ex-wife Sylvia, but there is a hint of a continuing story. It does seem as if Fingerman is taking a break from the regular comic book, but I hope he launches back into it. I think there is more to Rob's story.

Take these two reviews with a big grain of salt, as I've known both cartoonists a long time and can't really be objective. But both of these comics are worth reading, and in the case of Minimum Wage, I would strongly suggest you read the two earlier volumes if you are going to read book 2.