Some Thoughts about Degas

Several times in the past, dumb luck placed before me exceptional scholarship on the art of Degas. It happened years ago when I heard Theodore Reff lecture in New York, and again in October when MFAH’s Gary Tinterow and the Louvre’s Henri Loyrette opened “Degas: A New Vision,” and made available to me their exhibition catalogue.

It happened again the evening MFAH invited George Shackelford to lecture on Degas’s personal relationships. To use the artist’s relationships as a spring board to his art, was bound to make a juicy topic, Degas could be strange, an old fruitcake at times, correspondence indicates that in later years he had become insufferable. His prickliness must have accounted for Director Tinterow’s somewhat giddy introduction, “I can’t wait to hear what George has to say.”

Shackelford traced the art across years and locations and identified the individual family members, friends, and acquaintances in Degas’s paintings. His presentation deepened my understanding of At the Races (1869), an elegantly rendered “horse” painting which exemplifies Degas’s desire to capture modern life by depicting the Paul Valpinçon family in their carriage at the racecourse with a horse race taking place in the distance. Madame Valpinçon leans to shield from the sun with her umbrella their infant son Henri, whose tiny mouth is several inches from his wet nurse’s exposed tit. Scrutinizing the maternal activity from the front of the carriage are Monsieur Paul and Paul’s excited dog, the tight back muscles of which are so anatomically precise they practically twitch. In this early painting Degas eliminated the bottom portion of the carriage wheels and horse hooves from the picture plane, skewed perspective which set the tone for compositional irregularity. Foreshortening, off-centering and irregular spacing would continue to characterize his work.

As Shackelford had fun with his topic, I was struck by how purposefully Degas employed descriptive brush handling and unexpected composition. He had been guided by the Goncourt Brother’s directive to precisely portray life with a “living, human, inward line.” Although I haven’t read the Goncourt’s writings since graduate school, I do recall that Edmond Goncourt called Degas sickly and nervous and more skilled in capturing the essence of modern life than anyone he knew, and Jules Goncourt succumbed to the pox. 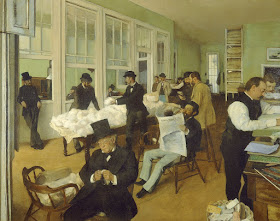 My debauched Louisiana upbringing has me partial to paintings Degas made while he was in New Orleans, so it was exciting to encounter A Cotton Office in New Orleans in MFAH’s exhibition and in Shackelford’s discussion. The 1873 painting illustrates, among other figures in the office, Degas’s New Orleans uncle and mother’s brother, Michel Musson, who is seated in the foreground, and Degas’s two brothers, René, who reads the newspaper, and Achille, who leans against the window. The brothers had relocated to New Orleans from Paris to work with their uncle as importers and exporters of cotton. It’s probably dumb to try to isolate a focal point in a de-centered composition, but I vote for the “Times Picayune” newspaper in the hands of the exceedingly relaxed René, although some art historians would chose the messy waste basket. It’s possible my selection is influenced by having had my picture on the front page of that newspaper (holding a glass of bourbon.)

Degas’s brother René behaved disgracefully. After marrying his New Orleans cousin Estelle Musson, the low life abandoned her and their six children and ran off to Paris with Madame Olivier, a family friend from the Esplanade neighborhood. This was despite the fact that Estelle was blind. In the New Orleans Museum of Art there is a lovely portrait of Estelle painted by Degas when she was expecting their fourth child, for whom Degas served as godfather.
Robert Boyd at 12:30 AM
Share