In June 1996, Scott Gilbert started running a serialized comics story in the Public News called Mysterioso. The original art for this story is currently on display at the Galveston Artist Residency until February 4. The original art doesn't have the lettering and titles, so I thought it would be nice to reproduce the story with the words included. For the next 31 days, I will be running one episode of Mysterioso.

In order to reproduce it as close to the original as possible, I photographed every page of the Public News where Mysterioso appeared. If it looks a little half-ass, that's why! 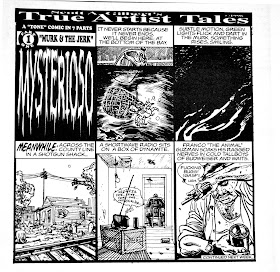