The Return of Danube Classic

Thanks for reading Mysterioso by Scott Gilbert. (And if you haven't, you can start here.) Mysterioso is one of the unknown classics of 90s comics. As far as comics go, the 90s were my decade. I started out the decade working for Fantagraphics Books, then moved onto working for Dark Horse Comics, Roger Corman's shortlived comics line (Roger Corman's Cosmic Comics) and finally Kitchen Sink Press. I also started my own small distribution and publishing company Westhampton House. I drew a lot, including a comic story that appeared in Coober Skeber #2: Marvel Benefit Issue (it was free). 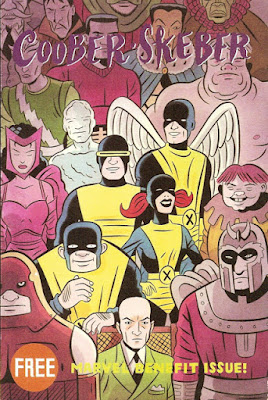 In the 90s, I also kept a daily sketchbook. I mainly drew images I found in ink--with a #0 or #1 sized sable brush and india ink. I almost never sketched the image first. I got pretty good at it. That was probably the high point of my drawing ability.

I took some of my sketchbook drawings and made a couple of mini-comics like things. One was called Mala Faca ("bad knife" in Portuguese), the other called Danube Classic.

During the 90s, I collected old high school yearbooks. It seems like a trivial thing to collect now--you can easily get pretty much all the high school yearbooks you want from online dealers, but when I was collecting them, finding them was a matter of pure luck and haunting used book stores. I especially loved yearbooks from the teens and twenties and from the sixties and seventies. I used them as sources for my own drawings frequently.

Sports pictures from the 70s were really good. Taking pictures of the football team in action was a chance for high school photographers to show their skills. I drew a lot of images based on those photos.

I also read The Histories

by Herodotus. This was the first work of history, basically a history of the relations between Greece and the Persian empire which culminates with the defeat of the Persians in 449 BC. But one of the most exciting bits is when the Persians, accompanied by some Greek vassals from Asia Minor, make war on the Scythians. The Persians had a lot of confidence because they were a powerful empire and the Scythians were just a bunch of primitive, illiterate nomads. But like the U.S. versus Vietnam, sometimes a seemingly weaker enemy can embarrass the stronger aggressor.  Persia was defeated by the Scythians. For Herodotus, I think this was a foreshadowing of the smaller and weaker Greeks defeating the powerful Persian Empire.

Anyway, I always loved the story of the Persians versus the Scythians. So I reimagined it as a football game between crosstown rivals. Using my yearbook football drawings, I made a 12 page minicomic called Danube Classic. 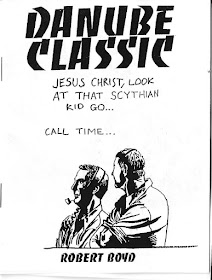 The Super Bowl is being played in Houston this weekend. It is a pain in my ass. I'm so sick of it already. But last weekend I was at my sister's house, and I noticed she had a copy of Danube Classic. I had honestly forgotten about it. It seemed like fate. On the spur of the moment, I borrowed it and photocopied the whole thing. Then I went down to my local copy shop and made 100 new copies. In "honor" of Super Bowl 51, I have reprinted Danube Classic. You can get it here on my Storenvy store. 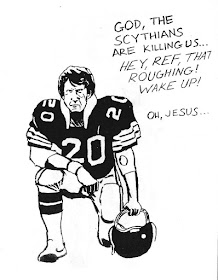 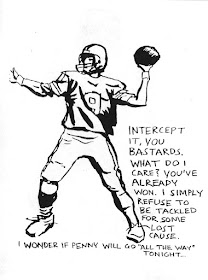