When the Salon exhibits began in France, the only artists who could enter them were members of the Académie des Beaux-Arts. No amateurs need apply. The rules were loosened up over time, but the juries were notoriously conservative. Because of the complaints of many artists, in 1863, French emperor Louis-Napoléon Bonaparte established a second salon, the Salon des Refusés, which anyone who couldn't get into the official Salon could enter. That first Salon des Refusés featured Le déjeuner sur l'herbe by Manet. 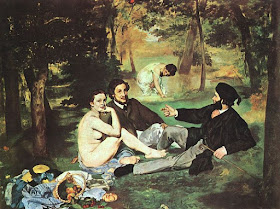 In 1768, England decided it needed it's own official art body and established the Royal Academy. It started an annual exhibit in 1769 that has run continuously until today. And unlike its French counterpart, it is open for every artist to enter. The Times Literary Supplement's podcast, Freedom, Books, Flowers & the Moon, had a very interesting segment on the latest exhibit, which just opened. The exhibit is displayed salon style in a series of rooms. Each room is "presented" by an invited artist and tend to be somewhat thematic. Each work goes through three layers of judging--one to get selected for the exhibit, one to be hung (work can be "selected but not hung," which doesn't sound any better than being not selected at all), and where in the room you are hung (near the ceiling, for instance, is not as desirable as eye-level.)

Each year they have a different coordinator, so that changes the flavor of the show each year. The show is commercial--most of the works are for sale and the big catalog lists the price. Half the money goes to the artist and half to the Royal Academy schools. This is a big fundraiser for them, and apparently for many attendees, the one time each year that they may buy a piece of art (which can be as cheap as £90 to hundreds of thousands of pounds for big name blue chip artists). You could amazingly get a Cornelia Parker for £330 (it appears to have sold already). Many of the cheaper pieces looked absolutely great--I know I'd be buying if I were there. 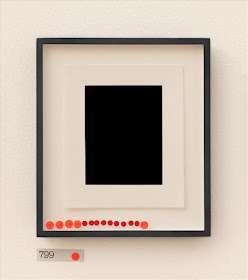 They get about 12,000 entries and there is a submission fee of £25, so before they sell a single piece, they've made £300,000 in revenue. The process of judging that many works, even if you have a committee involved, must be intensely grueling. It used to be that artists brought in their work to be judged, but now it is done electronically.

I don't know if there are any other open call exhibits with this kind of lineage in the world. But according to the TLS reporter, the Royal Academy Summer Show is very popular, and it is my experience that similar shows elsewhere are popular, too.  The first time I entered one was in the early 90s in Seattle. I had an idea for a cube-shaped painting on wood that would have a grid of nails protruding in all six directions. I was influenced by nail-fetishes, but thought it would be interesting if the nails face out instead of in. I made this very dangerous object and then heard about an open call exhibit in town. This was before the widespread use of jpegs, so works had to be submitted in person. There was a huge line of artists to get into the display space, including me gingerly holding my piece. (I didn't make the cut. Ironically, my friend Jim Blanchard later asked if he could have it, hung it over his breakfast table, whence it fell and punctured the palm of a friend of his.)

This is all a lead-in to discuss Lawndale's Big Show, which opens July 7. This is a juried exhibit that has been held almost every year since 1984. The rules state that "The Big Show is an annual juried exhibition showcasing new work in all media by artists living within a 100-mile radius of Lawndale Art Center." If you draw a 100-mile circle around Houston, it encompasses a huge area--Lufkin, Victoria and Orange all fall well within the circle, which extends into Louisiana to the east and almost to Austin in the west. Of course, driving to those places is further than 100 miles, but as the crow flies, they all fall within the radius. Consequently, every year Lawndale gets some work from the extreme hinterlands. This pays off in spades sometimes--like in 2013 when Port Arthur teenager Avril Falgout made Black Veil Brides and won a best-in-show award. 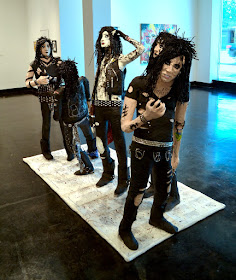 For the past few years, the juror has always been from out of town. The last Houston juror they had was Don Bacigalupi in 1997, who was the director of the Blaffer Gallery at the time. One reason to use out-of-towners is to get fresh eyes on the art--to have jurors who are completely unbiased, who won't feel any social pressure to pick art by their friends and acquaintances.

But this year, that has changed. The juror is Toby Kamps, a curator at the Menil and soon to be director of the Blaffer Gallery. He has long been an active participant on the Houston art scene, including his curation of No Zoning: Artists Engage Houston in 2009 at the CAMH. He sent out an email to many in Houston's local art community (including me) announcing that he would be the juror. My first thought was that the impartiality of the previous years would be out the window. Kamps knows a lot of local artists, and even if the judging is name-blind, he can tell the style and approach of artists he likes by sight.

I expressed this worry in the Facebook thread, and several artists (as well as Kamps himself) responded. One suggestion was that many of Houston's finest artists don't often apply to the Big Show. Why? I don't know exactly. It used to be that you had to physically bring the art to Lawndale, and that's a pain in the ass (especially if your art is big). But now it's electronic. Part of it is that you get rejected a lot, which sucks and seems especially like an unnecessary insult if you already have venues for your work. And I think another factor is that the Big Show has come to have a reputation for amateur work (in the best sense of the word) and showcasing emerging artists, which for an older, more established artist, may make the Big Show seem less attractive. In the Facebook thread, Kamps seemed to be specifically working against that. He sent out his Facebook post to a large selection of Houston's best-known artists. He seemed to want the Big Show to be a showcase for the best of Houston, like the old Blaffer Area Exhibits, which the Blaffer put on until 2008.

But Kamps addressed that concern. He wrote in the Facebook thread, "I want the Big Show to be really big. There'll be room for older, established artists, rising stars, and lots of new talent. I want EVERYONE to apply, whether I know them or not."

Other rule changes this year have been that artists can only submit one work (in the past, you could submit multiple works, which sometimes meant one might have several works in one show--such as the little suites of work by Matt Messinger and John Sturtevant in the 2011 Big Show). Director of Lawndale Stephanie Mitchell told me that she wanted to "challenge artists to hone in on one work made in the last year."

To encourage amateurs and emerging artists, Lawndale has reached out to schools for entries. And unlike the Royal Academy, there is no admission fee, so that is one obstacle that formerly existed removed.

Mitchell added, "Toby's line of thinking--which I very much agree with and I think is very much in the spirit of Lawndale--is that by showing a wide, diverse range of artists working across different media and at different stages of their career, everyone is elevated."

I wonder if in future Big Shows, they could sell the work as the Royal Academy does. Or would that be a bridge too far?
Robert Boyd at 12:45 PM
Share