The Art League selected Trenton Doyle Hancock as their artist of the year this year. Because the Art League's building was damaged by Hurricane Harvey, Hancock's exhibit was held in the former Rice Gallery. 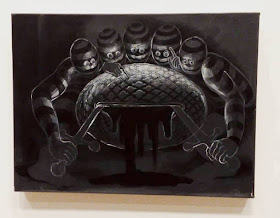 The opening was an big event--the artistic elite of Houston showed up. Hancock was mobbed by fans. 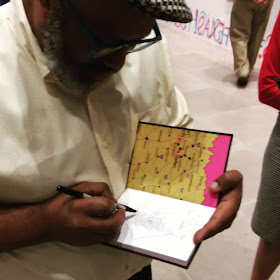 Among the attendees was artist Bill Davenport. He asked me what I thought about the comics influence on Hancock. I said it was fairly obvious and that Hancock had done comics-like pieces, like Epidemic! Presents: Step and Screw which was shown in Hancock's 2014 exhibit at the Contemporary Arts Museum Houston.

But, I told Bill, I think the main thing that Hancock gets from comics is the idea of characters that he uses over and over again. He has created a mythos inhabited by a group of characters that he draws and paints repeatedly. This is not unlike the mythoi of Marvel and DC comics. Superman and Wonder Woman live in the same "universe", and Spider-Man and the X-Men live in their own separate universe. The people who write and draw these comics must make their stories conform to the rules of those universes and the norms established for those characters. But these characters are quite mutable. A character who is a super-hero can turn bad or change his costume or even change her gender.

So what Hancock and some other contemporary artists do is the same. Hancock has this whole universe of the "Mounds" and the "Vegans", and has his own superhero alter-ego, Torpedo Boy. 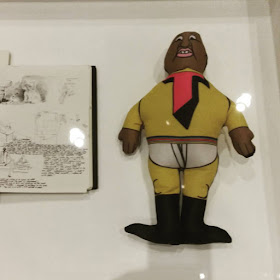 For Hancock, the idea of making characters involves the whole universe of modern capitalist trademarked characters. That includes making toys of characters; Hancock is a devoted collector of toys.

As I talked to Davenport, we both realized that for most of art history, artists had a bunch of characters they could use over and over. Biblical characters are obvious choices, and mythological characters, and historical figures. What is different about those characters and modern corporate characters is that no one owned Jesus or Zeus. Disney owns Mickey Mouse and Spider-Man. Warner Brothers owns Batman and the Teen Titans. And artist can use these characters once or twice, but if they try to create involve bodies of work using these characters, they'll get legally shut down. Spider-Man is just too valuable to Disney to let Trenton Doyle Hancock or any other artists to do with it whatever they want.

And Disney and other copyright holders have worked mightily to make sure that no one can make their own Mickey Mouse artworks. Prior to 1976, copyrights lasted 28 years and then could be renewed for another 28 years at which time the work would return to the public domain. In 1976, that 56-year term was extended to 75 years. Then in 1998, Congress passed the Sonny Bono Copyright Term Extension Act, which extended the copyright to 95 years. This law was created after a a decade of intense lobbying by Disney. And we can assume that Mickey Mouse will never enter the public domain--Disney will always lobby Congress to extend copyright.

So today's artists who want to use characters in their art will need either to do what Hancock did--make up their own mythos--or use characters that are in the public domain by virtue of being quite old: the old standbys (biblical characters, mythological characters, historical figures) or characters from literature or art from the 19th century or before.

All of which begs the question of why artists might want to use characters at all? Most artists in the past 100 years have been more than capable of creating their art without repeatedly using characters. I don't have a theory about this--someone should talk to artists who work with characters what their motivation is. In any case, it's a thing and unfortunately artists can't use Mickey Mouse or Wonder Woman or Captain America, because of copyright laws that are written for the benefit of large media companies.
Robert Boyd at 9:22 AM
Share