Yellow Negroes and Other Imaginary Creatures 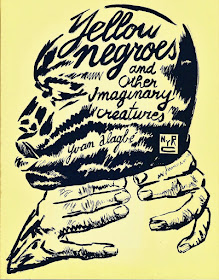 Yvan Alagbé published Les Nègres jaunes et autres créatures imaginaires in 2012, collecting stories that were originally published in Le Chéval sans tête, which Yvan Alagbé co-edited in the early 1990s. The longest story is Les Nègres jaune, which was originally published in 1994. It is widely considered a modern classic of French comics. The New York Review of Books has in recent years been publishing comics, many translated from French and belonging to Alagbé's generation and general style--experimental, artistic and somewhat oblique.It's taken more than 20 years for the USA to catch up with this masterpiece, with New York Review Comics publishing Yellow Negroes and Other Imaginary Creatures

in English with a new story as an afterward.These stories of migrants from third world countries seem more urgent than ever, although for Americans the situation is a little different. We didn't have, as France did, a vast African empire. Alagbé was born in Paris in 1971 of Beninese parents, and lived for three years as a child with his family in Benin. His stories are often about undocumented workers from Africa who end up in France. However, the stories don't exist to make a political point, even if such points are inherent in the stories. Alagbé is not a polemicist. His work is too subtle and inflected with modernism to be propaganda.

At first glance, his drawing seems very sketchy. He likes to slather black ink on the page. He has an expressionist style. perhaps related to José Muñoz, an artist whose work he published through Amok, a boutique avant garde comics publisher in France. But he sometimes lays off the heavy blacks and uses fairly delicate line work or even a humorous, cartoony style. It all depends on the needs of the story at a particular place. This willingness to change the art to suit the story recall's Muñoz's teacher, Alberto Breccia. But Alagbé's drawing style is not what sets him apart--it's the structures of his stories. 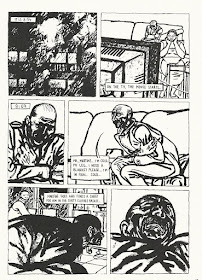 "Yellow Negroes" has the most conventional structure. The story of Alain, Claire and Mario--Alain is an undocumented Beninese man, Claire his white French girlfriend, and Mario, a former Algerian policeman who worked for the colonial government repressing the Algerian revolutionaries, making him a persona non grata in Algeria and an embarrassment to the current French police. Mario's awkward place between two worlds, neither of which want him, make him the most interesting character in the story. As an elderly retired policeman, he continually tells Alain and his sister Martine (who works as a housekeeper) that he can use his "connections" to help them get papers. But he is mainly a lonely man, who uses their abject state as a way to insinuate himself into their lives. 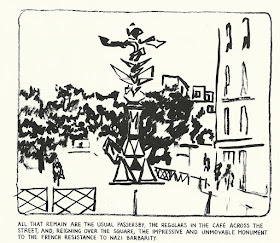 But a totally different structure is used in "Postcard From Montreuil". Here each panel shows a view of the street in Montreuil where the "Hommage à la Résistance 1939-1945" monument is. This abstract sculpture pops up in some of the panels, which otherwise mostly depict ordinary street scene--buildings, pedestrians, etc. Meanwhile, each panel has a caption below that describes how this was the site of a months long occupation of an employment agency by undocumented Malian workers. This jobs protest goes on for almost a year until the agency is moved without warning. It is not explained if the protest followed or not, nor are the protesters depicted in any way. Except for a few images of job notices pinned to a wall, almost every panel could indeed be a postcard of picturesque Montreuil and its "curious sculpture." Alagbé quotes the base of the monument: "If the echo of their voices weakens, we shall perish." The quote is attributed to Paul Éluard. In a way, the story itself shows that the echo of the voices of the protesters is weakened by the abrupt relocation of the jobs agency, but in a sense Alagbé's story itself becomes an echo, preventing the protest from perishing from memory. 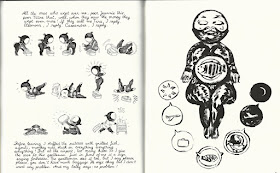 "The Suitcase" is a good example of how Alagbé changes his drawing style to fit the work. The barely there story is about Jeanne Martine Egbo returning from her "native land" to "France/Hollywood", carrying fish in her suitcase. The style is very abstract and symbolic, except for a few images of Egbo dealing with her suitcase, which are depicted in a completely different, comedic manner. 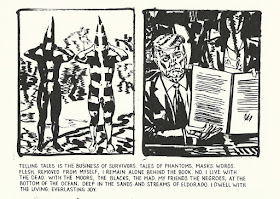 The new story "Sand Niggers" was drawn in 2017. Alagbé directly addresses the issue of "migrants" fleeing their homes to Europe, comparing their plight to another classic French comic from the 1990s (which I hope The New York Review translates)--Demonic Tales by Aristophane. The text is a meandering first person essay about migrants and refugees and survivors, as well as the dead. The images have an oblique relationship to the text. (Indeed, Donald Trump appears in one in one of his trademark signing ceremony poses.) "Sand Niggers" will perhaps help the American readership to make sense of what they just read.
Robert Boyd at 9:52 AM
Share