I, René Tardi, Prisoner Of War In Stalag IIB Vol. 2: My Return Home by Jacques Tardi 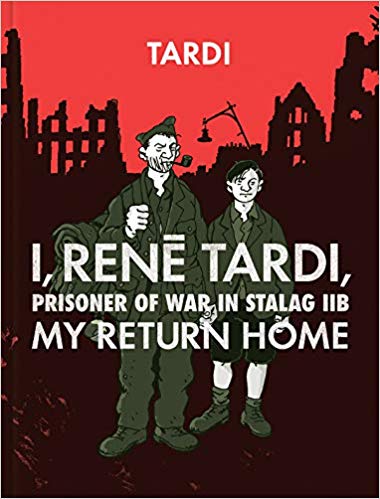 I, René Tardi, Prisoner Of War In Stalag IIB Vol. 2: My Return Home

This volume is a little more expository than the first volume. As the Russians advanced from the east, René Tardi's stalag was emptied out. He and the other prisoners were marched by their captors to the West, staying out of the hands of the Russians, British and Americans. Jacques Tardi got his father to write a narrative of his imprisonment and gradual liberation some 40 years after the fact, and then researched the route to try to figure out what his father actually did. Like so many displaced persons at the end of the war, the way home was not a straight path. (In this, My Return Home resembles Primo Levi's classic memoir of his liberation from Auschwitz, known variously as The Truce

Unlike the first volume, Jacques feels the need to keep us readers informed about what is happening in the last days of the war. René Tardi's group of POWs managed to skirt some of the major events at the end of the war, witnessing occasional aerial battles but avoiding heavy allied bombardments. But while they are slogging through the cold, scrambling to find whatever food they might, we are given a disjointed account of the last days for World War II. It feels overly expository, but it serves the purpose of reminding us readers of how little the vast hordes of wandering displaced persons and foot soldiers knew of what was actually happening all around them.

The book begins almost uniformly monochromatic--black and various shades of greenish grey, but as René gets closer to France, little splashes of color start to appear. In particular the red and blue of flags and red-crosses, which seem to symbolize liberation. Eventually fleshtones return and when René is reunited with his wife Henriette, Tardi allows himself a brilliant pink panel filled with flowers.

I want to make a note about the translation. Earlier volumes of Tardi that were published by Fantagraphics were translated by co-publisher Kim Thompson. Thompson passed away a few years ago, which suggested that maybe the Tardi volumes would stop (given that Thompson was their great champion). But thankfully they haven't and the translation is by Jenna Allen. Even though Thompson was fluent in French, I like Allen's translations better. I can't judge their faithfulness, since I can't read French. But a lot of Tardi's characters (including René Tardi) are tough guys, and Thompson's "tough guy" voice never felt authentic. But Allen pulls it off better than Thompson. (It pains me to say so because I loved the man...)