Just before coronavirus shut everything down, I went to San Antonio for Novel Ideas, Blue Star Contemporary's art book fair. The keynote speaker was Julie Ault, who had been a member of the art collective Group Material from 1979 to 1996. Group Material is probably best known for the AIDS Timeline produced in 1990. They produced research-based artwork, usually very political. Listening to Ault speak got me thinking about this kind of art. I've seen examples of it many times over the years, but for whatever reason, Ault prompted me to think of it as a specific genre of art. A kind of art that doesn't, as far as I know, have a name. I've been calling it "archive art" in my mind, but if any of you know an already existing name, please let me know. 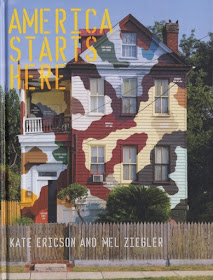 I stumbled across a workable definition while reading America Starts Here, a big art book about the work of Kate Ericson and Mel Ziegler. It's been on my "to-read" shelf for a long time, and this quarantine moment seemed like a good moment to crack it open. The first essay is by Bill Arning, written before he moved to Houston to become director of the Contemporary Art Museum. In it, he wrote:


The list of strategies Ericson and Ziegler used to make artworks seemed very unusual at the time, though today's young artists regularly employ these methods, which include the following: 1) Researching arcane areas of knowledge and pursuing a passion for the aura of the archive; 2) Using mapping and other similar ways of schematizing life; 3) Creating a system that dictates all significant visual decisions about a work's presentation; 4) Employing found elements rather than causing something new to be made; 5) Viewing the entire country as a text to be read, engaged and decoded; 6) Using natural materials, like stone, leaves, and water, as they are inflected or coded by culture; 7) Critically engaging decoration and architecture for what they reveal about society; 8) Using Americana as topic, material, or motif; 9) Engaging cultural institutions, museums, and monuments, such as the Supreme Court, libraries, and universities; 10) Investigating governmental decisions about urban space and making them public; 11) Collecting and collating found language, which can subsequently function as a kind of found poetry; 12) Using the practical business decisions of others as a structuring device for works; 13) Designing projects that exist in multiple states, each of which creates meaning; from the first research to the final use of materials; 14) Insertting delays into a process that unnaturally extends the in-between period of a simple task such as landscaping or cleaning, rendering otherwise invisible processes conspicuous and examinable; 15) Allowing works to disappear through transformation, making them cease to be "art" and instead begin to fulfill a useful function; 16) Cooperating with people outside the specific disciplines of the art world in a way that gives them a non-artistic way to participate; 17) Choosing to work with each other as collaborators.

That is quite a list! And really, I think the totality of this list only applies to Ericson and Zeigler. But I think big portions of the list apply to many of the artists who create "archive art," like Group Material.

In 2012, artist Robert Gober produced a notable example of archive art for the Whitney Biennial. He created a mini-exhibit of work by Forrest Bess. The archive part of came in vitrines devoted to Betty Parsons (Bess's gallerist) and John Money, a researcher who studied sexuality and who corresponded with Bess. This doesn't exactly fit into the approach outlined by Arning, except maybe 1) and 4). But it did require original research on Gober's part. This micro-exhibition was expanded into a major solo exhibition by the Menil Museum. Gober is not typically an archive artist--he is best known as a maker of intriguing, enigmatic objects. But he totally stepped up to the plate and knocked it out of the park in this project.

Two years later, the Biennial had another notable piece of archive art, The Gregory Battcock Archive by Joseph Grigely. Grigely serendipitously discovered a bunch of Battcock's papers in the building where he had his studio in 1992. Battcock was an art critic who appeared in several Andy Warhol films over the years and was the subject of a notable Alice Neel painting. He was murdered in 1980; the murder remains unsolved. In his statement about the work, Grigely describes the archive as a kind of portrait of Battson: "A document is both a material artifact and a node within a network of human relations. We both draw and draw out Battcock from these relations--the artists he talked with, the critics he argued with, the meals he shared, the students he taught, and the tricks with whom he had sex--they are all here, some with names, some with pseudonyms." I remember being fascinated by The Gregory Battcock Archive when I saw it at the Biennial--it was perhaps where the idea of "archive art" first lodged itself in my mind as a distinct category. That said, the problem with such art is that it doesn't have much visual interest. I'd much rather see an Alice Neel painting. 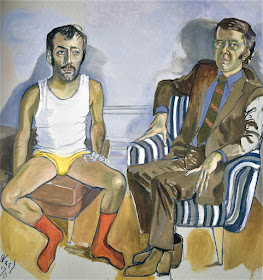 The lack of visual pleasure is the biggest failing with this genre of art. But Kate Ericson and Mel Ziegler are exceptions to this airless approach. The work they did fits into Arning's schema while also being visually beautiful. 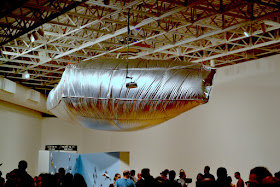 Carrie Schneider, installation at the CAMH, 2014

One local artist who has long engaged in this kind of artwork is Carrie Marie Schneider. Her exhibition, Incommensurate Mapping, at the CAMH in 2014 was a perfect example. She studied the CAMH's archives and used them to critique the CAMH in an amusingly subversive way. I wrote about this exhibit at length when it came out in two posts for this blog.

There have been other notable examples of this kind of art (loosely defined) in Houston. For example, City Council Meeting, a semi-theatrical piece of participatory artwork put on by Aaron Landsman, Mallory Catlett and Jim Findlay under the auspices of DiverseWorks at the El Dorado Ballroom in 2012, or Liz Magic Laser's Tell Me What You Want to Hear at DiverseWorks in 2012. Or Ericson and Zeigler's Red House (1979) and several other projects from the same time in Houston, as well as an installation at DiverseWorks in 1987. Obviously, DiverseWorks has been a major venue for this genre of art for several decades.

For me, this work sometimes is remarkably good. The idea of researching and presenting one's research has a natural appeal to a bookish person like me. It depends on how well the artwork is constructed and how much the artists' obsessions line up with my own. In the case of The Gregory Battcock Archive and Incommensurate Mapping, they worked for me very well indeed.

I wrote about Bounty, Patrick Renner's huge new installation up not at Redbud Gallery. The review is up at Glasstire. 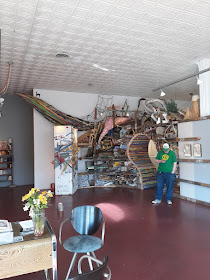 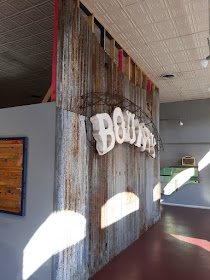