Revisiting Old Favorites at the Museum of Fine Arts

I went to the Kinder building at the Museum of Fine Arts here in Houston last Saturday--the first day it was open to the general public. For many viewers, what was exciting was that they pulled so much art out of storage. Some were things that had never been on permanent display before (and some piece may never have been displayed before). For me, that meant that a few old favorites that I had not seen in a long time finally got pulled out of the garden shed to be seen again. 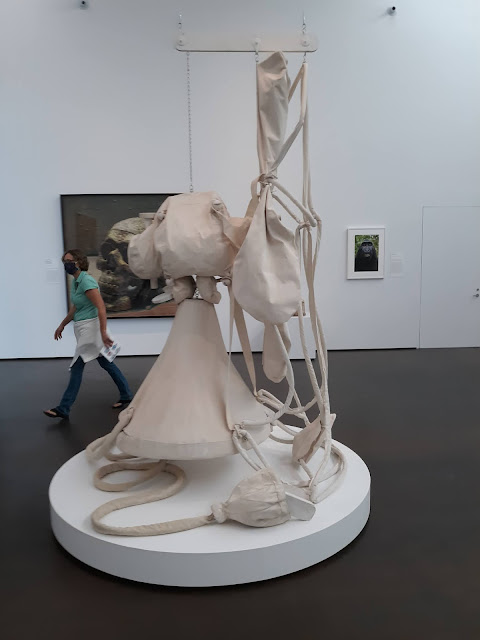 This sculpture by Claes Oldenburg used to be in the front lobby of the Caroline Wiess Law Building (the curved part that faces Bissonnet , designed by Mies van der Rohe). I saw it many times when I was was in high school and college. Ironically, it seemed like part of the furniture there. Always waiting for me to walk in and see it. But sometime in the past 25 years, the museum moved it into storage. 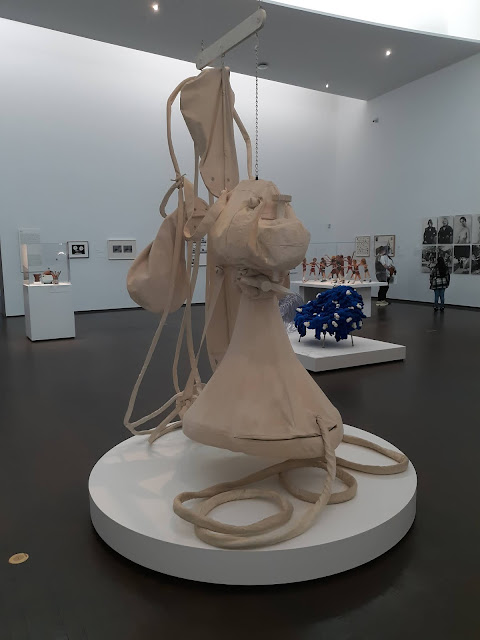 Aside from being an amusing and ironic piece of art, it reminds me of when I was a baby art-lover. The entryway to the Mies building is a spectacular space and seeing this classic piece of pop art made me feel at home. I know it's meant to be an oscillating fan, but the base always reminded me of a antique phone receiver. Because the blades of the fan are drooping, that conical shape is kind of the dominate shape. 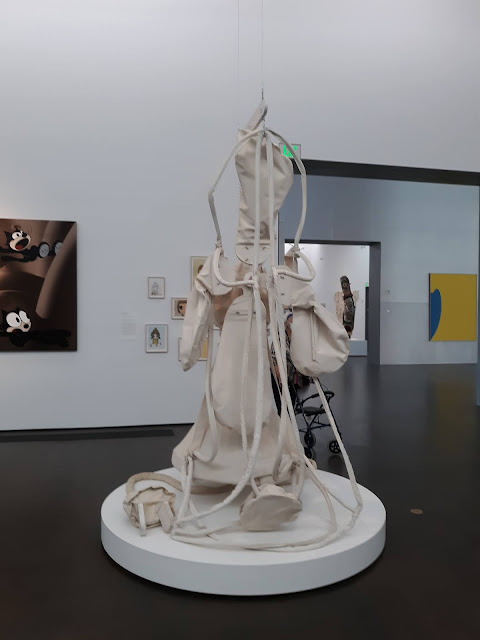 I know Oldenburg was creating what to him seemed like ordinary household items, but many decades later, it feels like Oldenburg is depicting antiques. Who uses an oscillating fan anymore now in the age of air conditioning? And I am starting to feel like an antique, too. Perhaps that is why I was so moved to see this piece again.

Another piece that used to be displayed in the Caroline Wiess Law Building that was pulled out of storage is this huge Louise Nevelson wall. In the new Kinder building, they have it displayed in a hallway where it is impossible to back up far enough to fit it into a photo on my phone. That isn't really a criticism of how they are displaying it--just a comment on how big it is! 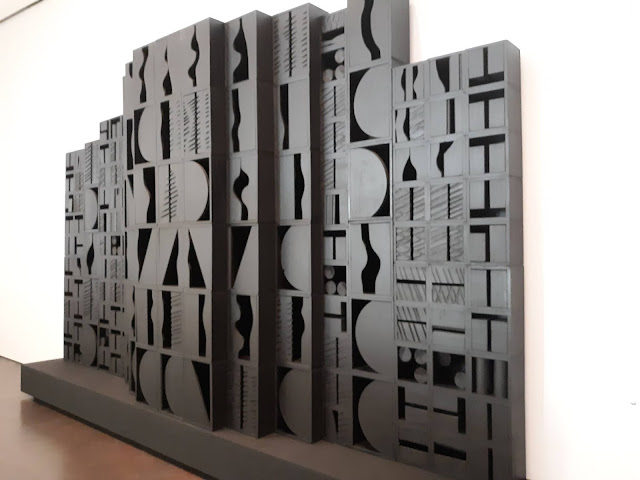 I've always liked how Nevelson stacked up wooden boxes in a way that announced, "This is art." The materials seem so humble--literally wood scraps. According to the information card, she reused wooden boxes that had once been pedestals. A little band saw, a few nails, some black paint and you have an art! Even as a young guy I was impressed. 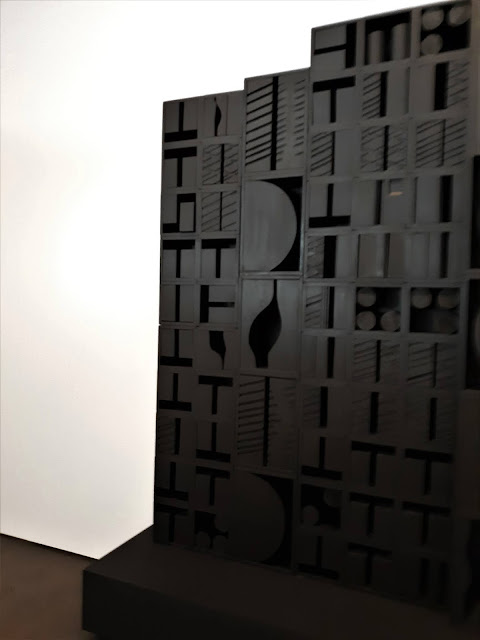 My photos lighten the color of the piece. It is much more black than it appears in these images. 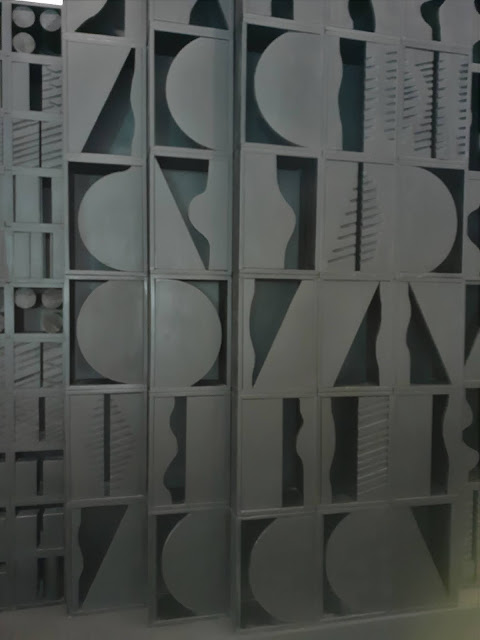 Looking at this piece after so many years reminds me of Nevelsons I have seen since. There is a huge public Louise Nevelson a few blocks away from my apartment (cast in metal). I am also reminded of a short story by comics artist Megan Kelso called "Queen of the Black Black" from 1997. When she did her first book collection, she titled it Queen of the Black Black

. It was an entirely fictional story about Louise Nevelson as an older woman lording it over her servants whose job it is to clean her dusty sculptures and otherwise assist her--and listen to her stories about how she was a young, beautiful, promiscuous New York artist. In an afterward, Kelso admits "it is not in any way biographical." However, it works as a story, and keeping Nevelson's sculptures dust-free must be an on-going nightmare for museums. 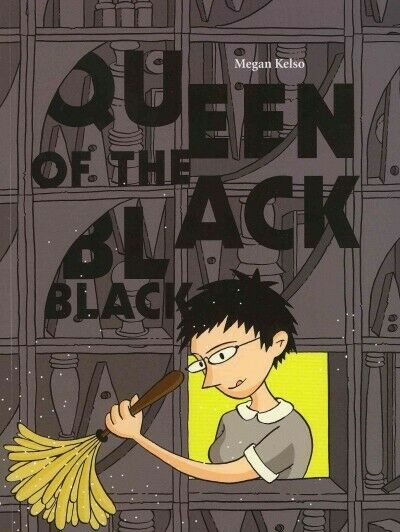 This issue of keeping Nevelson's sculptures clean is the subject of Kelso's cover to her collection. 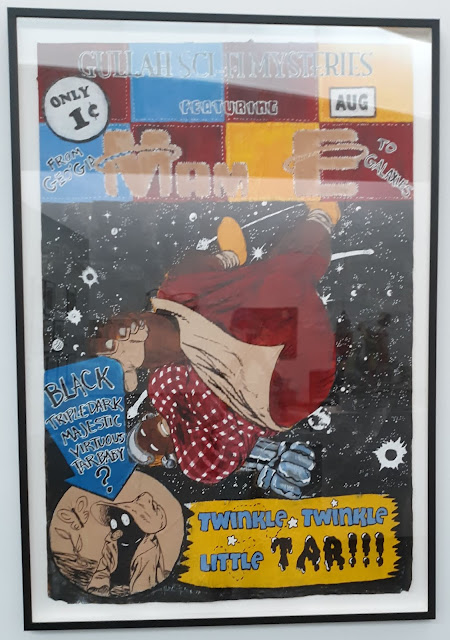 Dawolu Jabari Anderson, Twinkle, Twinkle Little Tar, 2009, Latex, acrylic, and ink on paper
This one was hard to photograph because it was under glass. I've only seen it displayed in the MFAH once, and it was in a show of black art. But what they do in the Kindle building is to literally integrate the "black art" with the rest of the collection. It is no longer relegated to token status. 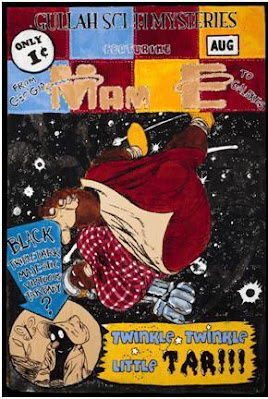 Dawolu Jabari Anderson, Twinkle, Twinkle Little Tar, 2009, Latex, acrylic, and ink on paper
This image is from the MFAH's website. It's not a great photo, but at least you don't get the glare of the glass.
Dawolu Jabari Anderson is, as far as I know, living in Houston, and I've seen his work several times over the years. But I haven't seen anything from him in the last few years. Has he moved away? Stopped making art? I don't know. I would love to see what he is working on. I love these pastiches of old comic book covers combined with African-American folk characters. He was a part of the collective Otabenga Jones & Company (which was in a Whitney Biennial a few years ago), and like a bunch of African American artists about his age from Houston, he's obsessed with comic books. But where is he now?

The next few images are not artworks that have been in storage for decades, like the Nevelson and the Oldernberg. They were, until a few weeks ago, over in the Beck Building with other 20th century artworks--many of which have moved to the Kinder Building now. 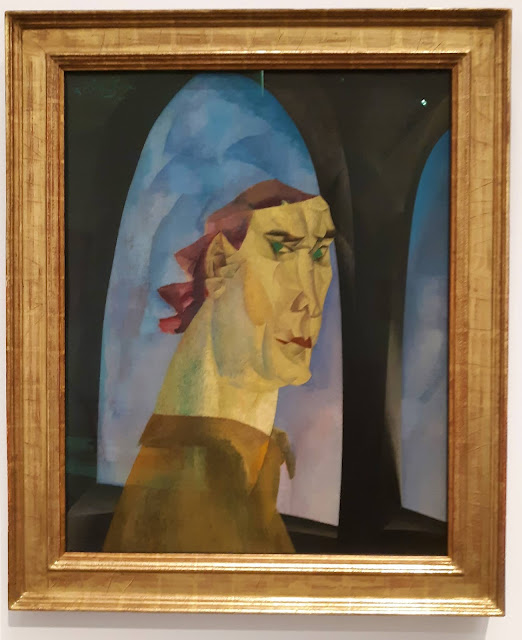 Feininger was apparently living in Berlin when he painted this bilious, cubist self-portrait. The wall card describes him as being an "enemy alien" at the outbreak of World War I, but I think that is an error. Feininger was born in the U.S.A., and the U.S.A. didn't enter the war until April 1917, long after this painting was done. But it does raise the question--what did Feininger do between April 1917 and November 1918, during which time he really was an enemy alien? I don't know, but as soon as the war was over, he became one of the first teachers hired by the Bauhaus.

I became a fan of Feininger because of his short-lived comic strip, The Kin-der-kids, which was exceptionally well-written and beautifully drawn. Feininger had been working as a cartoonist in Germany and France since 1894, and his studies of avant garde art leaked into his cartooning. The Kin-der-kids was the first cubist comic strip. It was collected into a book, The Comic Strip Art of Lyonel Feininger: The Kin-Der-Kids and Wee Willie Winkie's World

,  by the defunct Kitchen Sink Press, and apparently reprinted by Fatagraphics. But what hasn't been collected (in English, at least) are his German and French cartoons. I would buy that book, if some publisher wanted to publish it. 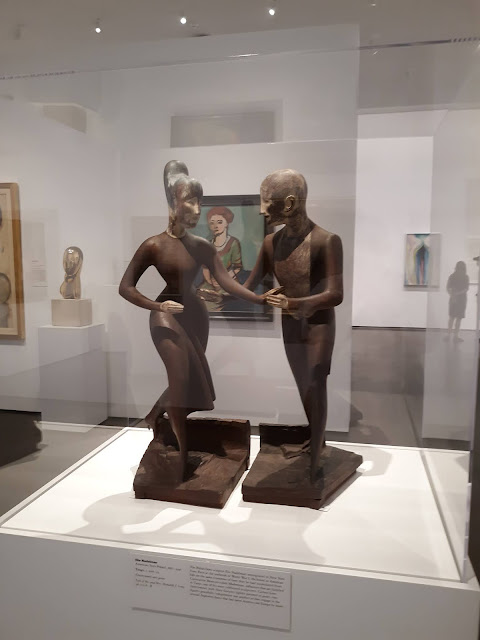 I don't really know much about Elie Nadelman. This sculpture was always kept in a gallery of 20th century American art in the Beck building, but now it lives in the Kinder building. It looks like a piece of folk art, but it's not. Nadelman had studied art in Europe and knew avant garde artists there, but moved to the U.S. and became interested in folk art. His own work melds his training and his interest in folk art. 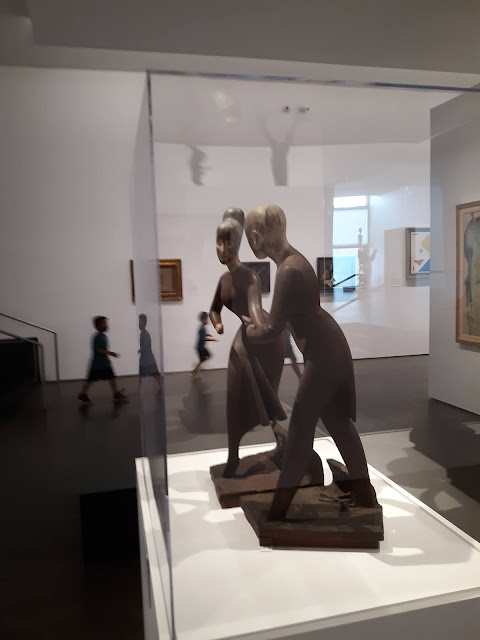 This sculpture has long charmed me. The thing about an educated artist like Nadelman imitating a folk style is that he can never be truly naive. But so what? It works and is lovely--what else do we need?