I am working on some new posts, but I hope this real estate art post will satisfy my few remaining readers for a little while. This is a very interesting house on the near northside, traditionally a very Hispanic neighborhood. I downloaded the map so you can see where it is:

As you can see, it is right across Little White Oak Bayou from Hollywood Cemetery and quite close to Moody Park. I don't know what kind of house you would expect in that neighborhood, but I am willing to bet that it would not be this. 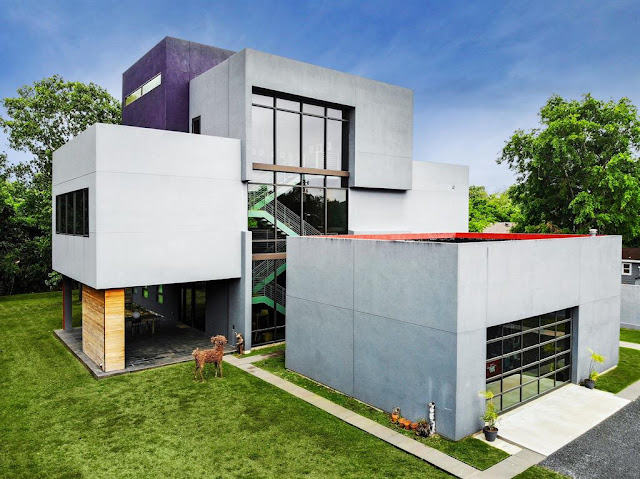 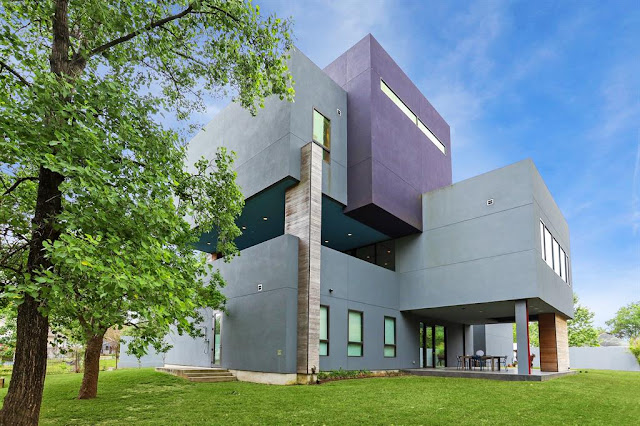 That is one moderne pile of blocks!

If you are flipping through HAR.com, as I enjoy doing, and you want to guess what kind of house will have interesting art hanging inside, this is the kind of house that you would guess. And in this case,  you'd be right! As usual, I didn't recognize most of the art (and mostly it is not photographed to show off the art--these photos serve an entirely different purpose). But I think I know the artist behind one of the pieces. 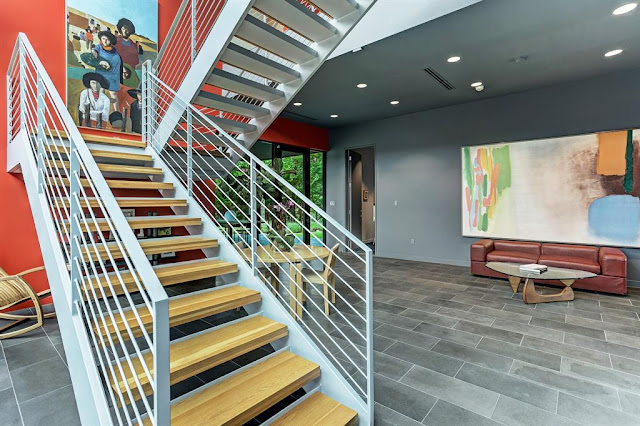 In this photo, we can see two paintings. On the right, we see a large abstraction that reminds me a little of Richard Diebenkorn, but is obviously not a Diebenkorn. But the painting on the stairs is, I think, by Lucas Johnson, the late Houston-based painter. I definitely could be wrong, and would appreciate finding out for sure from any of you eagle-eyed readers if it is or if it's not. Johnson was a beloved member of the local art scene. He died in 2002 from a heart attack that he suffered while on a boat fishing with fellow artist Jack Massing.

I don't recognize any of the other art in the house, but you might! If you do, please identify it in the
comments below. 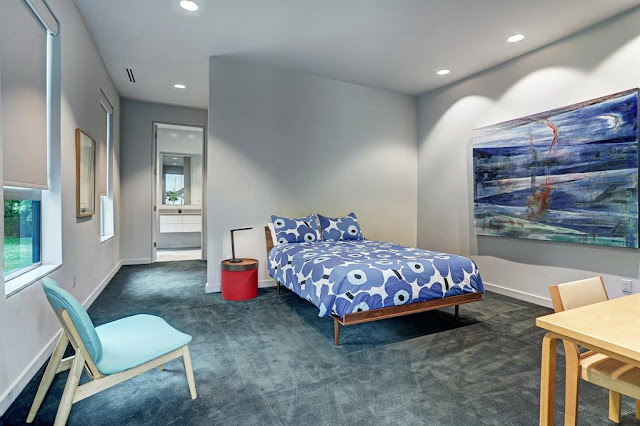 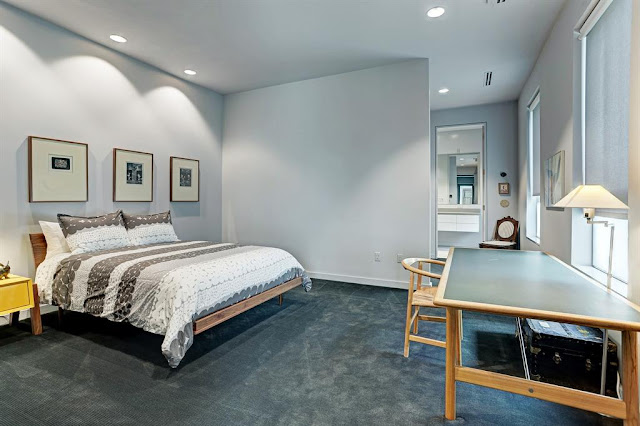 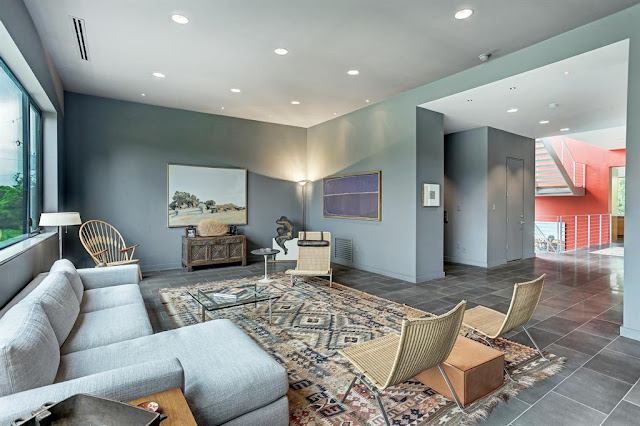 Update: The blue painting here is by Stanley Boxer (according to Bronwyn Lauder). 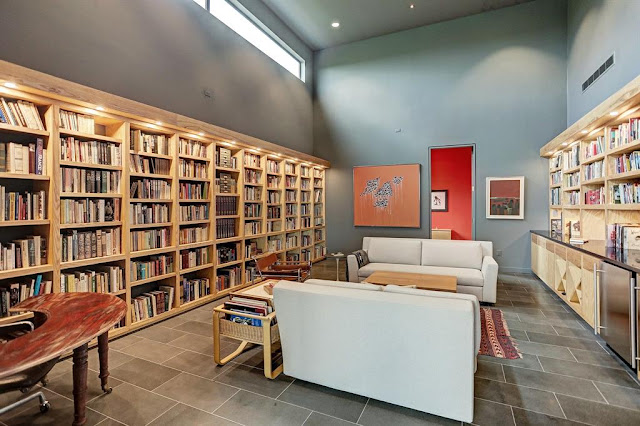 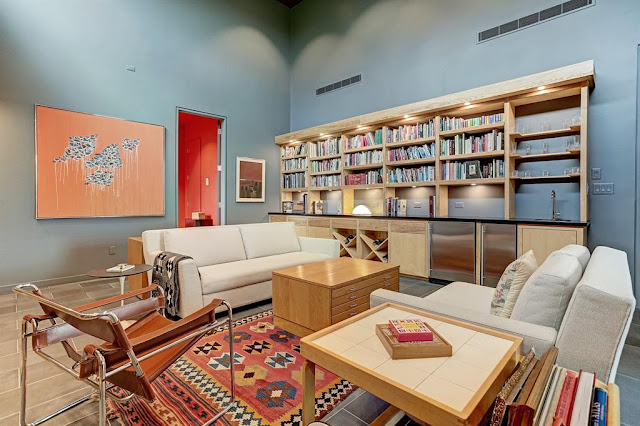 Another view of the library. And the painting, which appears to have paint drips or possibly loose threads hanging down look very familiar--but I can't identify it. Update: The orange painting is by Robert Goodnough (according to Bronwyn Lauder). 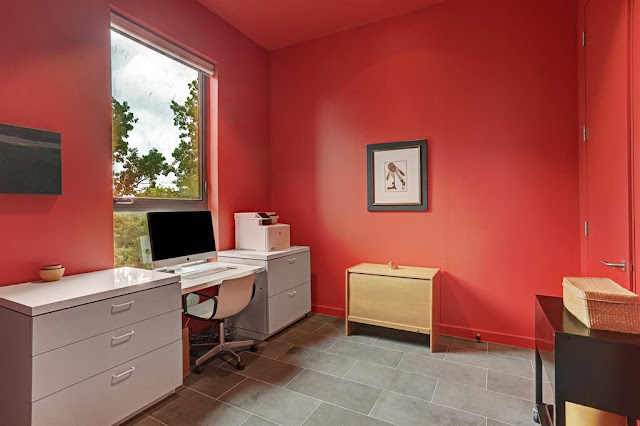 It has been suggested that this piece is by Deborah Roberts. 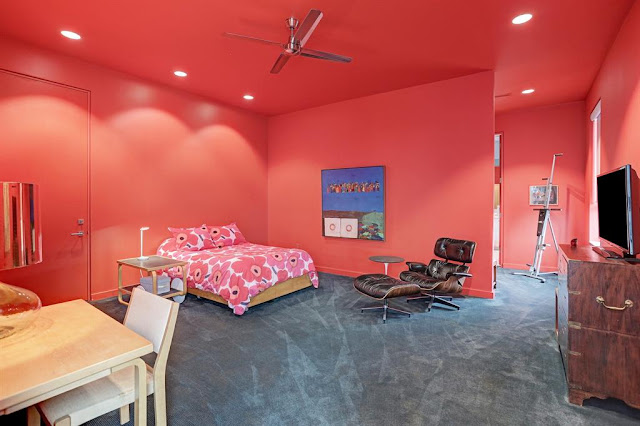 It appears that there is an easel in the background on the right of this photo. Perhaps the owner of this house is a Sunday painter? 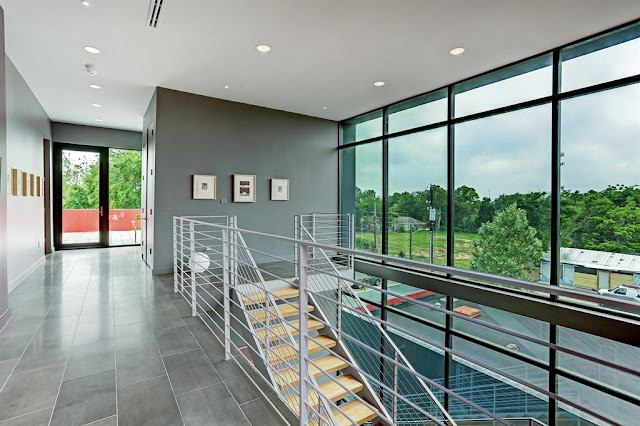 I was intrigued flipping through HAR.com by this huge, futuristic house out near Texas A&M. I hoped they might have an art collection--a house that big on a lot that big (317 acres) has room to have some Storm King-sized sculpture. No such luck--the most sculptural thing on the property was the house itself. (At least, in the photos they showed.) 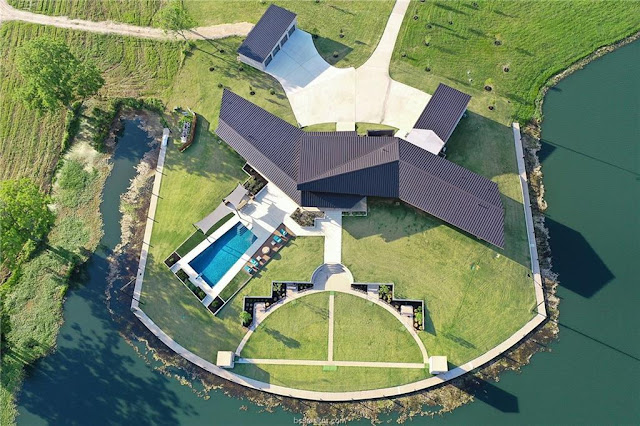 It looks like a stealth bomber landed on the prairie. 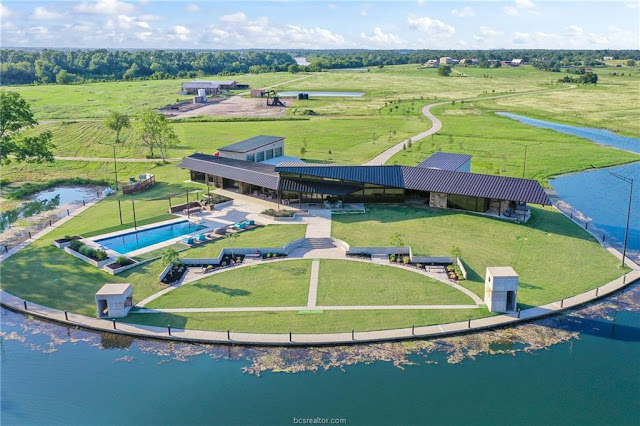 The art shown on the inside is not immediately familiar to me. If I were the type of person who could afford a seven million dollar house like this, I would invest in some sleek sculpture (maybe a Roxy Paine) and an big Julie Mehretu inside.

Here's what they have that they showed in the photos on HAR. 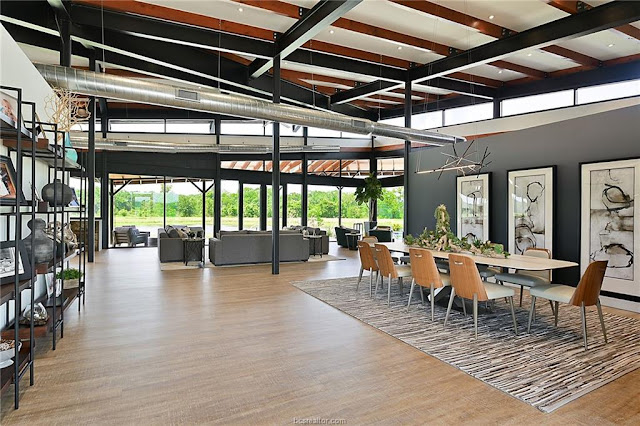 But I think the current owner would agree that the right kind of art for the inside of this is abstract art. 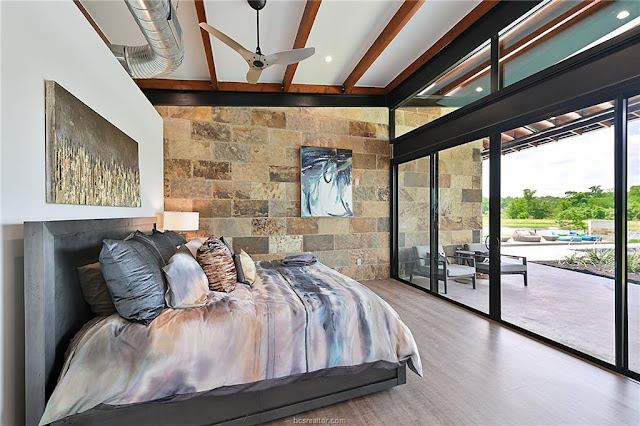 But they also display a little pretty photography. 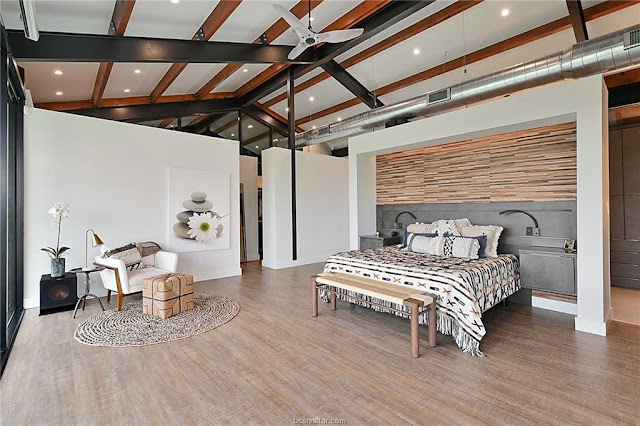 And if the landscape visible right outside the huge windows is inadequate, they hang a couple of landscape painting. 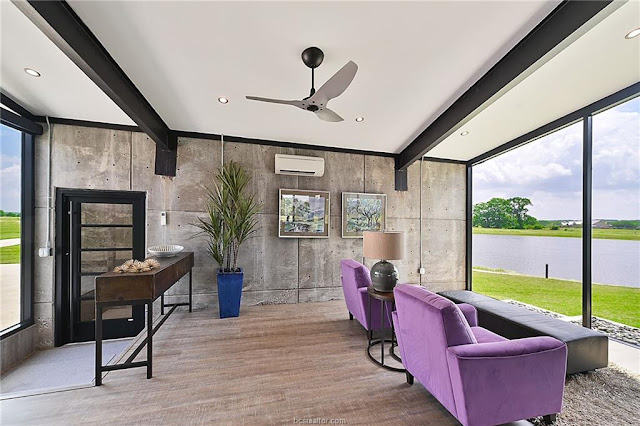 I do not recognize any of the artists of these works, nor the architect (whose name is apparently not a selling point--it's not mentioned on HAR). Do any readers have any insight they could share?

If you like these posts, I invite you support my Patreon. It's cheap and helps me a lot.

Today I'm discussing Art & Revolution by John Berger, the late English critic best known for Ways of Seeing. Art & Revolution is a critical biography of Ernst Niezvestny, an unofficial artist in the Soviet Union. He was a sculptor who eventually emigrated to the USA in 1976. (Art & Revolution was written in 1969.) I've written about Niezvestny before. I became interested in him when I first heard about him in Khrushchez: The Man and His Era by William Taubman.

(This was the first book report for which I ever wrote a script in advance, but I have to say it feels a little stiff--a little too much like a lecture I want to improve my delivery, but I'm not sure what the best way is. I'm open to advice!)

And just a reminder--press the Patreon button to the right. Or just go to this link.