That's what Karen Archey at Art Fag City calls assemblage in this post. It generated a lot of protest, and was admittedly not quite thought out. But I laughed when I read those words. That is what assemblage is--putting bits of crap together to make art; if you saw the collected elements laid out on the floor would seem extremely unlikely to combine to be "art," and yet do.

Paddy Johnson, responding to the outcry the original post caused, wrote a new post: "Reasons Why Assemblage (Or 'Crap on Crap') Is Now the 'House Style' of the Art World." In my profound laziness, I am just going to copy her reasons here.


1. Everybody’s broke and there’s always an abundance of trash.
2. Six years of art education teaches that high art is dead so everyone takes the low road.
3. Disgust with capitalism and consumer culture.
4. “Nihilism.”
5. Genuine love of trash culture and its byproducts.
6. Avoidance of known art materials.
7. A way to make formal arrangements of things without being called “Greenbergian.”
8. A way to be political without sloganeering.
9. Genuine interest in the lineage of Schwitters/Rauschenberg–-considering it an unfinished project.
10. New trash (web and technology cast-offs) necessitates new ways of arranging trash (and new content unknown to Rauschenberg, et al).

I would add at least one more reason. (11) A delight at taking bits of crap and creating something artistically interesting out of it. I guess 11 overlaps with 5, 6, and 9, except I am thinking more of things like Picasso making a bull's head out of a bicycle seat and handlebars. 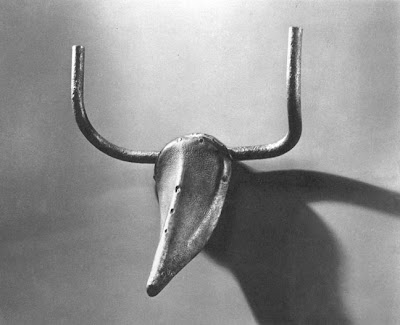 Of course, some of my all time favorite artists were or are "crap on crap" artists: Kienholz, Rauschenberg, Jessica Stockholder. And the word "assemblage" just sounds like it was invented by fucking PhD. I will keep using the word, but in my mind, all those great pieces of scrap and glue and stuff are "crap on crap" art.
Robert Boyd at 8:49 PM
Share