By the way, here is the Burroughs piece that inspired the title of this blog. I first heard it on the excellent Dead City Radio. It turns out it was written as part of a project with Keith Haring called "Apocalypse."


Mariners sailing close to the shores of Tuscany heard a voice cry out from the hills, the trees and the sky: "The Great God Pan is dead!" Pan, God of Panic: the sudden awareness that everything is alive and significant. The date was December 25, 1 A.D. But Pan lives on in the realm of the imagination, in writing and painting and music. Look at Van Gogh's sunflowers, writhing with portentous life; listen to the Pipes of Pan in Joujouka. Now Pan is neutralized framed in museums, entombed in books, relegated to folklore.

But art is spilling out of its frames into subway graffiti. Will it stop there? Consider an apocalyptic statement: 'Nothing is true. Everything is permitted.' - - Hassan i Sabbah. Not to be interpreted as an invitation to all manner of restrained and destructive behavior; that would be a minor episode, which would run its course. Everything is permitted because nothing is true. It is all make-believe, illusion, dream...ART. When art leaves the frame and the written word leaves the page - - not merely the physical frame and page, but the frames and pages of assigned categories - - a basic disruption of reality itself occurs: the literal realization of art. This is a very different direction from Duchamp, Klein and Manzoni, of appropriating everything in sight by signing it or putting it on a pedestal. Instead of appropriating by framing and signing, remove the frames and the pedestals, yes, even the signatures. Every dedicated artist attempts the impossible, Success will write APOCALYPSE across the sky. The artist aims for a miracle. The painter wills his picture to move off the canvas with a separate life, movement outside of the picture, and one rent in the fabric is all it takes for pandemonium to sluice through.

Last act, the End, this is where we all came in. The final Apocalypse is when every man sees what he sees, feels what he feels, and hears what he hears. The creatures of all your dreams and nightmares are right here, right now, solid as they ever were or ever will be, electric vitality of careening subways faster faster faster stations flash by in a blur.

Pan God of Panic, whips screaming crowds, as millions of faces look up at the torn sky:

The planet is pulling loose from its moorings, careening into space, spilling cities and mountains and seas into the Void, spinning faster and faster as days and nights flash by like subway stations. Iron penis chimneys ejaculate blue sparks in a reek of ozone, tunnels crunch down teeth of concrete and steel, flattening cars like beer cans. Graffiti eats through glass and steel like acid, races across the sky in tornados of flaming colors.

Cherry-pickers with satin brushes big as a door inch through Wall Street, leaving a vast souvenir postcard of the Grand Canyon. Water trucks slosh out paint, outlaw painters armed with paint pistols paint everything and everyone in reach. Survival Artists, paint cans strapped to their backs, grenades at their belts paint anything and anybody within range. Skywriters, dogfight, collide and explode in paint. Telephone poles dance electric jigs in swirling crackling wires. Neon explosions and tornados flash through ruined cities, volcanoes spew molten colors as the earth's crust buckles and splinters into jigsaw pieces.

Skyscrapers scrape rents of blue and white paint from the sky, shredding, peeling, nitrous ochres and red eat through bridges, which fall into the rivers splashing colors across - my back I always hear - piers, streets AMOK art - Hurry up please, it's time - floods inorganic molds - Time's winged chariot hurrying - stirring passion of - near. Closing time gentlemen - metal and glass steel - these our actors as I foretold you - girders writhe - actors frantically packing in theatrical - mineral lust - hotels... are all spirits.

At my back - faster and faster - I always hear hurry up - energy ground down into - please it's time closing - sidewalks and street by billions of feet and tires erupt from manholes and tunnels break out with volcanic force let it come down careening subways faster and faster stations blur by, Pan whips screaming crowds with flaming pipes millions of faces look up at the torn sky OFF THE TRACK OFF THE TRACK the planet is pulling loose from its moorings, careening off into space spilling cities and mountains and seas into the Void faster and faster.

This is where we all came in blue and white paint from when Everyman sees color nightmares are right here warehouses and piers electric energy floods inorganic molds subways faster and faster, glass steel girder Pan God of Panic whips screaming concrete, faces look up at the torn sky and burn with madness. TRACK the planet is pulling bucking cars and trucks careening into space faster and faster into the Void spinning walks and streets flash by like subway stations in a reek of ozone.

Force let it come, skyscrapers scrape rents of the final Apocalypse in the sky, dream rivers splashing color across solid roads and buildings, AMOK art vitality stirring passions of metal blur by writhing in mineral lusts. Walls of glass melt OFF THE TRACK OFF a billion crazed eyes, the sidewalks run feet and tires, chimneys ejaculate blue tunnels break out graffiti village pulled across the sky in flaming colors.

Skyscrapers scrape rents of blue and white paint from the sky, the rivers swirl with color, nitrous ochres and reds eat through the bridges, falling into the rivers, splashing colors across warehouses and piers and roads and buildings, AMOK art floods inorganic molds, stirring passions and metal and glass, steel girders writhing in mineral lusts burst form their concrete covers, wall of glass melt and burn with madness in a billion crazed eyes, bridges buck cars and trucks into the rivers, the sidewalks run ahead faster and faster, energy ground down into sidewalks and streets by billions of feet and tires erupts from manholes and tunnels, breaks out with volcanic force:

LET IT COME DOWN

Caught in New York beneath the animals of the village, the Piper pulled down the sky. 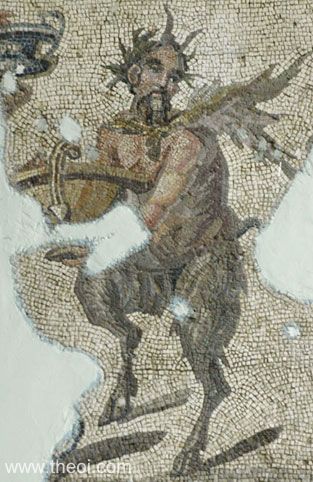 Pan from an Antioch Mosaic
Robert Boyd at 3:44 PM
Share