Whatever Happened to Mimi Pond?

As I mentioned in my previous blog post, one of the startling facts about Wayne White is that he is married to Mimi Pond. Mimi Pond was a cartoonist whose work I sort of lumped in with the new wave cartoonists of the early 80s--it looked a lot like Lynda Barry's. When I told Wayne White I was a comix fan, he said I should introduce myself to Mimi Pond. So I did.

I mentioned to her that she was one of those cartoonists I had lost track of, but she informed me (politely) that far from being one of those people who stopped cartooning, she kept doing books for awhile, and recently did work for the L.A. Times. Maybe this is common knowledge, but it was definitely news to me. 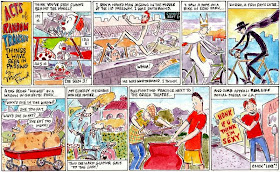 I had no idea. I knew she had written the first episode of The Simpsons (pretty cool credit to have on your resume, I must say!). But aside from that, I didn't know what she had done since the '80s, or anything about her. (One exception--she makes a fictionalized appearance in David Chelsea in Love as "Lily Pad." And no, I didn't ask her about it.) 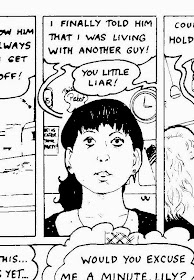 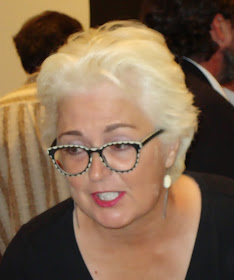 Not only has she not stopped doing comics, but she is 1) going to be in the Best American Comics 2009 (Charles Burns is the guest editor this year), and 2) even more exciting, is working on a graphic novel called Over Easy. And you can read a big chunk of it on her blog! Over Easy page 15 by Mimi Pond

The early to mid-80s were a really important time for me as far as comics goes. The quality of the new work coming up then and the evident excitement and energy of the cartoonists really hooked me for life. So it's really exciting that someone whose 80s work I read and enjoyed is coming back strong. I can't wait to read Over Easy when it's published.
Robert Boyd at 9:03 PM
Share