One We Lost: Wayne White

Wayne White's installation, "Big Lectric Fan to Keep Me Cool While I Sleep" opened Thursday, and it's incredible. The photos above are painted in huge letters on the walls and floor of the gallery. In the center--a giant cartoonish George Jones head, constructed of lumber and styrofoam. 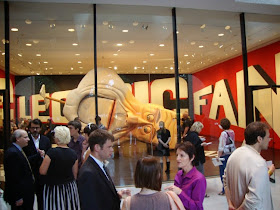 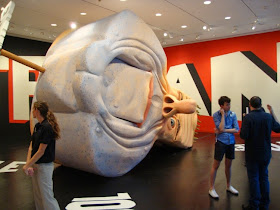 This is the crew-cut George Jones of "White Lightnin'" fame. You can open George's mouth and smell the whiskey on his breath, and a peep-hole into his brain shows his dream: 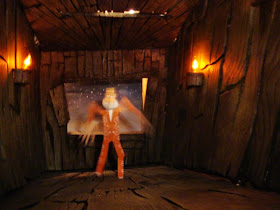 His dreams themselves are a fan keeping George cool. 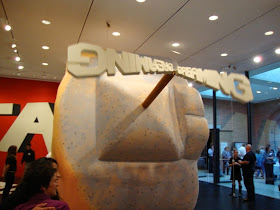 And off to the side, in honor of Houston, White has build an "ice house." 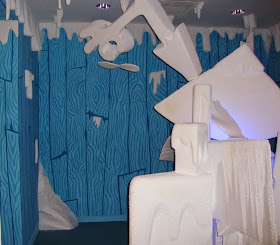 Of course I love it. How could anyone who likes H.C. Westermann, Peter Saul, Jim Nutt, Claes Oldenberg, Gary Panter, etc. , not like this? But who is Wayne White? You know, how is it that a guy is making art like this, right up my alley, without me knowing about it?

White has a book, which I picked up at the Brazos Bookstore, called Wayne White: Maybe Now I'll Get the Respect I So Richly Deserve. 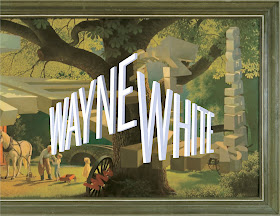 So I start reading it and I was knocked sideways. Wayne White is responsible for one of my all-time favorite comic stories. The story is "Bridge" and it appeared in the classic Bad News #2, edited by Kaz and Paul Karasik. The story is reprinted in White's book, but best to track down a copy of Bad News #2 to read this story of Southern suburban childhood. (It is a story that definitely deserves to be anthologized somewhere.)

White was brought up in Tennessee and went to college there. He started drawing comics and doing puppet shows there, and (this is astonishing) dated Carol Tyler while he was an undergrad. He saw RAW, and was so fired up by it that he moved to New York, tracked down Art Spiegelman, and got in with the NYC comics crowd, which I suppose is how he ended up in Bad News #2. But there was no way to make a living at comics. He ended up hooked up with Pee-Wee Herman's new show, where he designed puppets and sets (I know Gary Panter did as well, and I'd be interested in knowing how the work was divided up. White's art from this period looks a lot like Panter's--ratty and energetic.) This got him lots of work on kids' shows and doing rock videos, like this one:

He also got married, and for comics fans, this is another eye-opener. His wife is Mimi Pond (who I got to talk to a bit--more later). Since 2000, he has mainly been doing paintings on top of thrift store lithographs--nature scenes, farm scenes, seasides--all with three-dimensional words and phrases inserted into the scene. A little like Ed Ruscha crossed with Jim Shaw. 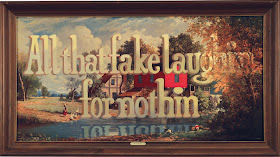 All That Fake Laughin For Nothin, acrylic on framed lithograph, 2008

I spoke to him a bit at the opening, and he was a bit amazed that I remembered "Bridge"--he called it his best comics story. His paintings are incredible, his installation is fantastic, his videos and TV work terrific. But as a devotee of the art of comics, I can't help regret a missed lifetime of fantastic comics that Wayne White decided not to do. No doubt about it, he made the right decision. Comics are so unrenumerative; lots of the best cartoonists disappear from the scene. White is kind of an extreme example--he barely stuck his toe into the medium before he moved on. That's why I didn't put two-and-two together when they announced this installation. Still, it is so weird to read the interview in his book (conducted by Todd Oldham, weirdly enough--who also published the book). He was so connected to art comics. 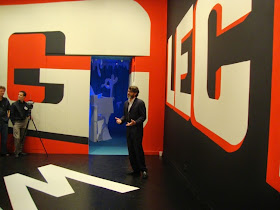