Was the Cinema Arts Festival a Success?

I love the idea of the Cinema Arts Festival. This year was the first "full" festival (apparaently there was a mini-festival last year). The concept is movies about art and artists. The support structure is from a variety of arts organizations around town, importantly some fairly alternative organizations like The Aurora Picture Show, Diverse Works, SWAMP and more. So, how was it?

I saw 6 features during the time it ran. The opening night was Me and Orson Welles by Richard Linklater. 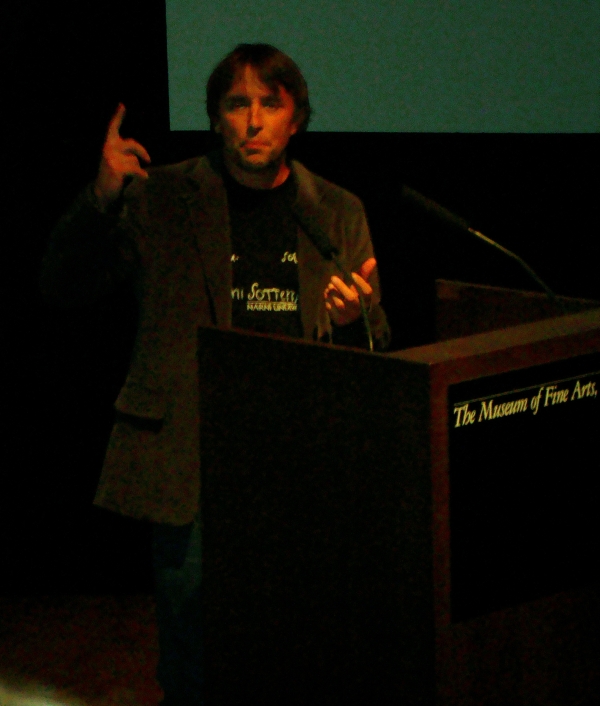 Linklater introduced the film and talked afterwards. Linklater is one of my favorite filmmakers. In 1990, I was living in Seattle. When the Seattle Film Festival came around, they printed lots of programs in a slick magazine. It was huge--they seemed to be showing 100s of films. I carefully read through it, choosing films to see. I picked Slacker for the dumbest reason--it was set in Austin, so I thought it would be interesting to see a film about Texas in Seattle. It was a huge hit. Apparently, Linklater was not prepared for the reaction he got.


We went to the Seattle screening, and there was this line around the block. This was Seattle before it was a scene, or before it was officially called anything. It was like, "Wow, they're all dressed like people in the movie!" (Salon, "Slacker": 15 Years Later, July 5, 2006)

But this wasn't a line of people who were into the film because of good word-of-mouth or sympathy to the subject matter--it was totally unknown. This was what it was like for every movie. The Seattle Film Festival was extremely popular!

Elsewhere, Linklater has written how this was the turning point for the film--the first time a non-Austin audience really got the film. After the film, he bounded on-stage and answered questions from the audience. He was funny and energetic.

It's weird how little he has changed in 19 years. He didn't "bound" this time, but he still was obviously jazzed to talk about his new film; he was still witty and amusing. The film is about the Orson Welles staging of Julius Caesar on Broadway (this is before Citizen Kane). Linklater filmed it mostly with British stage actors, and he described one of the common questions actors have when they are playing other actors acting. The question is, "Is the actor I'm playing any good?" Linklator's answer was, "The actor you're playing is not only good, but he's a much better actor than you!"

The crowd filled the MFAH theater (which is not small), so it was a successful kick-off.

The next film I saw was What If, Why Not? Underground Adventures With the Ant Farm. The Ant Farm were a group of architects/artists from San Francisco who are best known for the Cadillac Ranch up near Amarillo. The filmmakers, Laura Harrison and Beth Federici were present as were two of the original Ant Farm artists, Chip Lord and Curtis Schreier. 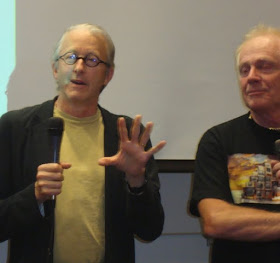 Lord is on the left and Schreier is on the right. Good film, great audience. The screening was delayed so that Houston mayor Bill White could helicopter in and talk about how important art was to him. It was weird, because he left as soon as he finished his remarks. He didn't seem that sincere. But apparently it was White who suggested that Houston needed a new film festival.

So far so good. The next day, Saturday, I went to check out two films at the Angelika, Picasso and Braque Go to the Movies, which was well attended. The actual projection was a crime, though. This was a documentary with a bunch of talking heads, but their names and titles kept getting truncated on the left or right edge of the screen. Still, a large and enthusiastic crowd. The film had a thesis and presented somewhat convincing evidence for the thesis, that Picasso and Braque were influenced by early film (say 1905 to 1914).

Then back to the same theater for Who's Afraid of Kathy Acker. This was a rather intense film, which is what you'd expect based on the subject. But the theater was nearly empty. Seriously, I think there were no more than 10 or 15 people there, including Acker's fellow San Franciscans Chip Lord and Curtis Schreier. I would have thought there were a few more old REsearch-era alternative culture fans out there who would check this out. Acker is kind of a period piece, so maybe that explained the tiny audience. But still, I was a little shocked to see the theater so empty.

Sunday was a Tilda Swinton day. It was the first time I ever saw an Oscar-winner in the flesh. I saw two films-- the first was Derek, an excellent, moving film about Derek Jarman, with whom Swinton got her start as a film actress. It was a powerful, inspiring film. A film about a scene, one of my favorite subjects. Swinton spoke about Jarman and that scene after the movie, and she was terrific. She is an incredibly striking person--that's obvious from her films, but seeing this giraffe-like woman (an effect exaggerated by her very high heels) in the flesh was really something.

The second film was an older one, Teknolust, from 2002. It was filmed by Lynn Hershman Leeson, who was also present. I can't say I loved this movie, but I was really intrigued by Hershman's rough "trailer" for her upcoming work, !Women Art Revolution!, which basically collects 40 years worth of film and video of feminist visual and performance artists, footage that she has been shooting (and hoarding) this whole time. This could be fascinating--but it sounds like it should be a miniseries on TV instead of a feature film. But if it were edited into a miniseries, PBS or Ovation would probably be too conservative to air it. What Saturday showed was that people would much rather see a movie about Picasso and Braque than about a radical woman artist like Kathy Acker. 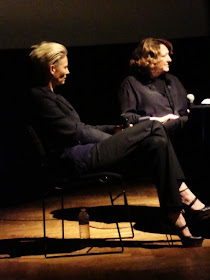 Swinton is on the left (obviously) and Hershman is on the right. Notice Swinton's bizarre metal skyscraper heels!

So my question: was this film festival successful? I think attendance could have been better. But it does seem like the Cinema Arts Society got the rich and powerful of Houston to open their checkbooks a bit for it. It has establishment support. A long time ago, I would have thumbed my nose at that (if I even paid it any mind). Now it seems a lot more important to me. We get into tricky cultural politics when we say it, but alternative arts organizations survive best with establishment institutional help. But establishment institutional help may negate (or at least limit) the possibility of truly revolutionary art. This is an irony that cannot be denied. (Look at the controversy happening right now with the New Museum.)  The world is littered with the corpses of art organizations, groups, scenes, etc., that were independent of the rich and powerful... for a little while. In that regard, at least, the Cinema Arts Festival feels fairly solid. I hope it lasts.
Robert Boyd at 12:24 PM
Share