You Are There by Jacques Tardi 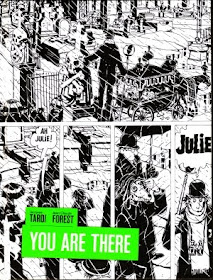 by Jacques Tardi and Jean-Claude Forest

Of all the comics published in 2009, none has deserved more acclaim yet faced more indifference (as far as I can tell) than You Are There. For reasons I don't understand, Jacques Tardi is tough for American readers to take. It's not like his work has lacked for American publishers--starting in the 70s, his Polonius was published in Heavy Metal.  Fantagraphics, the publisher of You Are There, has made prior attempts at translating Tardi--a Nestor Burma mystery in Prime Cuts and Griffu in Pictopia (I was the editor of that one). NBM published two delightful color albums featuring Adele Blanc-Sec, and her adventures continued for hundreds of pages in Dark Horse's Cheval Noir comic series. iBooks published another excellent Nestor Burma story in a graphic novel format, and Drawn & Quarterly has published several chapters from Tardi's brutal yet beautiful It Was The War of the Trenches. In these works, American readers got a real sense of the breadth of Tardi's work, and responded with a collective shoulder shrug. (I enjoyed all of these books and stories.)

Among French readers, You Are There appears to be held in special regard. Publisher/translator Kim Thompson has said that Tardi holds a place with the current generation of alternative French comics similar to that held by Crumb here in the U.S. Writer Jean-Claude Forest is also a legend in the history of comics, most famous for creating Barbarella in 1962. As I write this, I realize I am setting up the reader for two possible reviews. One is that after all this build up, I tell you that You Are There is ironically a dud. The other is that it lives up to my high opinion of Tardi's work. The good news, in short, is that the latter option is true. And if you don't want to read anything about the plot of You Are There, take my word about its excellence and stop reading right here.

The protagonist is Arthur There, last son of a family that once owned Mornemont, a vast estate which has somehow been subdivided into smaller estates by various rich families, leaving There with possession of the walls between the estates. He lives in a narrow house perched on one of the walls.

He earns a meager living opening gates for the various estate owners (making certain never to touch the ground as he does so)--in this small way, they are still dependent on him. They are his gates after all. Most of his income goes to his legal team (including the president of the bar association) who are charged with reclaiming title for There to Mornemont. 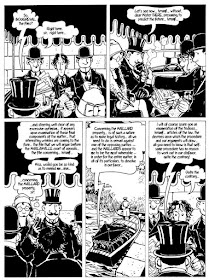 But as you can see, they are mainly showering There with legal bullshit in order to keep him paying his retainer. This particular legal meeting takes place on a boat--the only place where There can leave his walls is to step onto docked boats (Mornemont lies on the shore of a large lake--I couldn't tell for certain, but it may be an island in the lake). Consequently, he gets his sustenance from a grocery boat. The captain of this boat is the last in a long line of grocer-sailors. 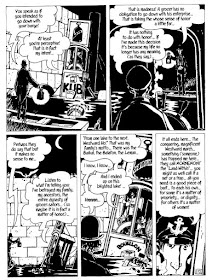 You can see that this story doesn't exactly pretend to be realistic. (That said, There's bizarre property holdings, the walls between the estates, have all kinds of analogues in the real world. I would not be surprised if Forest read such a story of real estate absurdity and was inspired by it to write this tale.) Once the bizarre circumstances of There's life are outlined, Forest brings in the classic complication--love. There sees Julie Maillard (daughter of one of the estate owners) nude through a window. Julie is a bit of a tease (and There is no prize catch.) But There is so inexperienced and shy, she must take the initiative. Her post-coital monologue is hilarious, all the more so because Tardi portrays There's stunned amazement at what has just happened in a very surreal way. 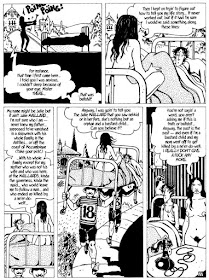 Meanwhile, far from Mornemont, the government is in trouble. They are about to lose their majority, and when that happens, their corruption will be revealed. They learn that in 1784, the king granted a certain Marquis sovereignty over his tiny fiefdom in exchange for services rendered in Golconda. The Marquis nominally retained sovereignty after the Revolution (at which point he became a mere citizen), and that sovereignty has passed down, father to son, to the final heir. That heir is Arthur There. The government therefore concocts a plan to help There regain his land, and for the government to go into internal exile in Mornemont when they lose the the next election. Exile from which they cannot be extradited, where they pull the strings of their new puppet sovereign. As it turns out, they arrive at just the right moment, when the landowners, tired of Arthur's antics, have attacked his walls. They are no match for the power of the French government, though.

But Arthur doesn't end up happy--the landowners are expelled and Arthur owns all the land again. The government withdraws when they unexpectedly win the election. But his joy has been ruined by Julie's promiscuity and the fundamental impossibility of happiness.

Like many of Tardi's works, You Are There is set in the early 20th century. It doesn't pay to try to locate a precise year for this work. Forest and Tardi aren't creating a historical novel per se. They aren't realists (although Tardi is capable of creating realistic fictions.) They use history as an absurd jumping off point, much as Mark Helprin did in A Soldier of the Great War or Italo Calvino did in The Cloven Viscount, The Nonexistent Knight, and The Baron of the Trees.

Is this a satire on property and heredity? It can be read that way. Part of There's problem is that his "victory" means Julie's dispossession. What delights me is not the meaning of the work, but the bizarre world Forest and Tardi have created. Tardi's art, which combines the liveliness and simplicity of the best cartooning with a well-observed realism is perfect for this kind of surreal tale.

I hope this new series of Tardi books (this one and West Coast Blues are the first) will spark new interest in this great cartoonist among American readers. His work deserves to be read and will endless reward readers who seek it out.
Robert Boyd at 11:35 AM
Share