The Cage by Martin Vaughn-James

The Cage is a cult book in the classic sense. Fairly few people have seen it in English, as far as I know. (I believe that a French language edition remains in print.) Author Martin Vaughn-James (1943-2009) began work on The Cage in January, 1972, and finished it in February, 1974. It was published in a limited edition of 1500 copies by The Coach House Press in Toronto in 1975. (This "limited edition" print run will likely cause some amusement among those who, like me, have ever worked for small press publishers. By that standard, much of what small presses produce are "limited editions.") The Cage is the fourth of a series of graphic-novel-like books that Vaughn-James created (the ones that preceded it were Elephant (1970), The Projector (1971), and The Park (1972)), and apparently he did a book called L'Enquêteur for Futuropolis in 1984. Aside from that,Vaughn-James seems to have been primarily a visual artist (he also wrote two prose novels). (You can see some of his paintings here--they seem quite good.)

The work is not timeless. The lettering style on the cover dates the original edition. 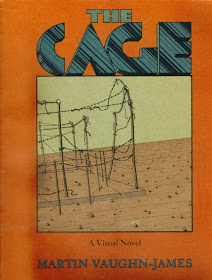 The insides were printed on dark brown paper (in the images below, I have adjusted the contrast to help make the images more legible). At first, the art has the look of late-60s/early-70s graphics (for example, think Yellow Submarine/Peter Max). 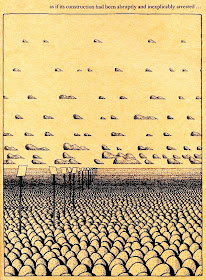 Let's assume Vaughn-James drew this sequentially. (This is by no means an obvious assumption, based on the subject matter and the way the work unfolds.) If so, it only takes a few pages for his work to lose that early 70s look and become something unique.

This book is often called a graphic novel (sometimes a "proto-graphic novel"). I have read that Vaughn-James was influenced by comics. But that influence doesn't really show. This book resembles 19th century comics that used typeset captions that lay outside the panels (think Max and Moritz) and generally has one image per page, like children's story-books. In short, if Vaughn-James was familiar with comics, he was deliberately throwing out some of comics' most powerful tools--the idea of the breakdown (the way panels are arranged on a page and the way they interact with each other) and the use of balloons/captions that are part of the images. There is no way of knowing how Vaughn-James would have used these tools from the comics toolbox, if he had chosen to do so, nor am I suggesting that The Cage suffers for not using them. But not using them leads me to infer that Vaughn-James was coming from a place outside the tradition of comics. It is only retrospectively that we can call this work a work of comics or a graphic novel. The term Vaughn-James (or his publisher) used is a "visual novel" (a term that I might prefer to "graphic novel" if I could go back in time and change the established terminology).

The Cage begins as if it were a narrative of a vanished civilization. We see ruins that resemble Mayan pyramids. 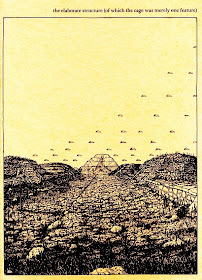 And subsequently we see images of the vanished civilization in its glory. 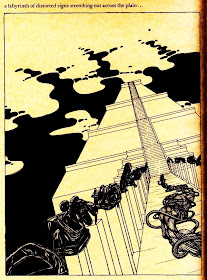 But no people. So far it is like an architectural history, with a rather poetic narrative of how the "builders" were overtaken by some sudden deadly event (plague? volcanic eruption?) before they could finish their project--"the cage."

This beginning lulls you into thinking there is a logical, cohesive narrative here. That what will follow may be the history of the demise of this civilization, or some interpretation of the civilization (art historical, anthropological, etc.) But there is no historical narrative, no explanation. Almost instantly after dazzling you with Meso-American pyramids (with their mysterious Druillet-like objects on plinths), we see images of admitted banality--a small bedroom (filling with sand), a modest brick building (which looks like it could have been built at any time between 1875 and 1930) with a large smokestack. This building turns out to be the "High Level Pumping Station," built in 1906. We see this in a series of images, as if Vaughn-James is walking towards the entrance of the Station and taking a photograph every few steps. As one reads The Cage, one frequently has  this sensation of "walking through" a scene.

However, the logic of the walk-through is undermined, as each subsequent image shows the building in an increasing state of decay. A lot of time time seems to have passed between each image. This motif of sequential images showing increased decay will be repeated throughout the book. We will see architecture in various states of disrepair. Places will seem brand new and then progress to incredibly aged and blighted. And beyond these scenes of aging, we will see the same places (hallways, exteriors, bedrooms, etc.) apparently being used in drastically different ways. Again, the implication is that long periods of time have passed between images. The uses for which the rooms and halls are being put are obscure. For example, a hallway will be filled with empty plinths, as if in anticipation of an art exhibit. 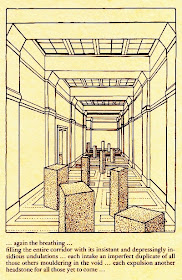 Then in what is apparently the same hallway, a floor of plants (hostas?). 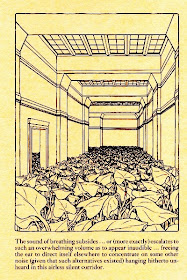 Vaughn-James returns to the same rooms, to the same halls over and over. The text seems to be talking about the past, so one feels that one is seeing these rooms at various times in the past. They are invariably empty of people, but are not necessarily static. 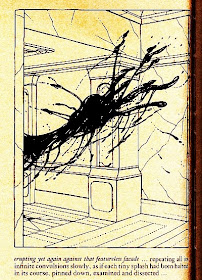 Is there someone just outside our field of vision, throwing a bucket of paint or ink? The way it is splashing seems unnatural, as if it hit something invisible in the air. The way the ink is curving up makes it almost seem like a living thing.

People are absent, but bodies are not. Bodies are formed of objects. 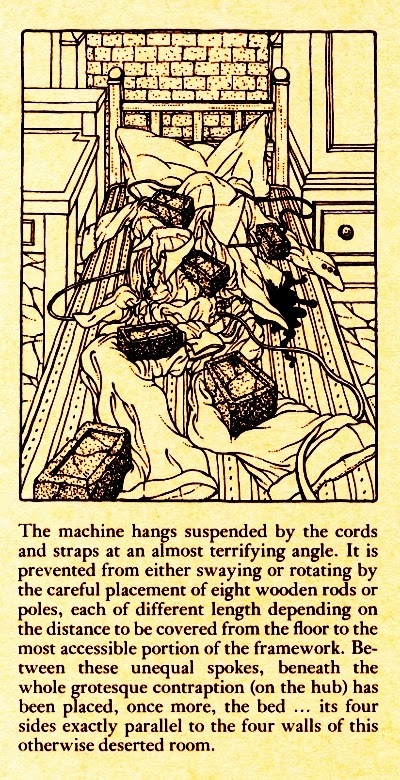 This is one of the small drawings--about a quarter of the page. Drawings range from this size to full-pages, sometimes two-page spreads after a fashion. Bricks are a repeating theme. Things are held in place with bricks. In The Cage, they are menacing. 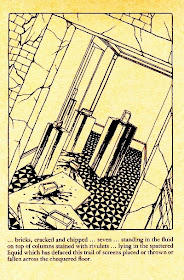 Are these bricks artworks? Or were they used to destroy artworks? Notice the text under this illustration--it describes the picture to a certain extent. It repeats textually what we are seeing. But the text under the previous picture, though detailed and descriptive, appears to have nothing at all to do with the image. The text throughout The Cage seems to come in and out of phase with what we are seeing, sometimes paralleling it: 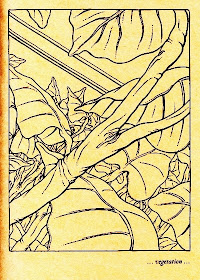 But more often only vaguely relating to it (if at all).

In addition to bricks, the other repeating objects are involved in communication--books, records, cameras, microphones, etc. Here is another "body," this time made with books, a typewriter, a reel-to-reel, etc. 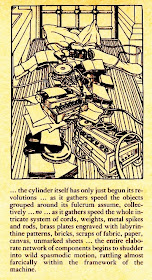 If a discussion of one aspect ("the cage") of a dead civilization is on subject in The Cage, another is communication and art. 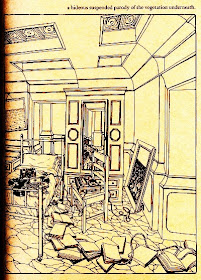 In this image, in addition to the visible tools of communication that for a path to the bed, there are two framed pieces of art--but the contents of those frames are images that we have seen before. Without hitting us in the face with it, the book using this self-referentiality to make us think about what is an image and what is real. 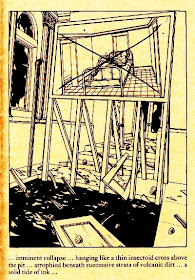 The text plays the same game. It describes here what seems to be a physical thing within the text but then implies this thing is made of ink; "ink" could be a synecdoche for the book itself. (Note the image of the bedroom on the billboard. Also not the state of decay, as if this is a photo taken after a riot. The previous two images were of the same street--the first pristine, the second as if there had been a small riot but it was over, then this.)

Another repeating motif is that of the tied-up body. 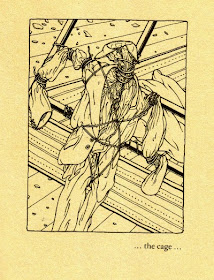 This motif is used in some of the most spectacular and enigmatic images, such as this double page spread. 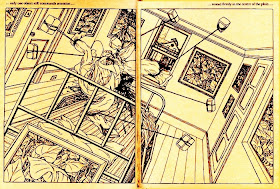 The bricks are playing their part of holding the clothes in place--just as the bricks of a prison hold a prisoner in place. A version of this image becomes a framed but damaged picture within another image of bondage. 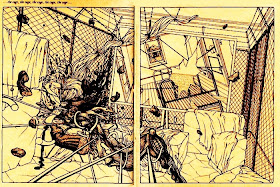 This is the only image in the book that contains something that looks like flesh--flayed, sliced flesh. This chain-link enclosure topped with barb-wire is a repeated motif, and it is literally a cage, but perhaps not the cage. The cage is described in the text, but doesn't seem to be a single physical place. The simple bedroom and the concentration camp enclosure are equally the cage.

The obvious question is whether the cage is a metaphor. I prefer to think not because it would make the whole project seem a bit trite. Still, one could see it as relating to artistic practice and the risks of artistic self-absorption. Or it could be about how a certain negative feature of a culture or civilization could doom it.

If the latter interpretation has any validity, then The Cage might remind readers a lot of Koyaanisqatsi. In both works, you have a depiction of a civilization gone wrong. They are both non-narrative, and both play games with the passage of time. Both feature a visual aspect and a non-visual aspect (the Philip Glass score in Koyaanisqatsi) which sometimes flow together and sometimes are parallel but independent. Both pulse with an undercurrent of menace.

But The Cage defies easy interpretation. It is more pleasurable to simply wallow in its ominous mood and mystery.

(That said, others have tried to interpret it; see here and here, for example.)

Update: The Cage has finally been reissued in a new edition.
Robert Boyd at 7:49 PM
Share